Warren For VP! Screw it, Hillary Clinton should definitely pick the Massachusetts senator as her running mate

Even though it means losing her as a senator, Warren is such a great running mate idea that Clinton should do it 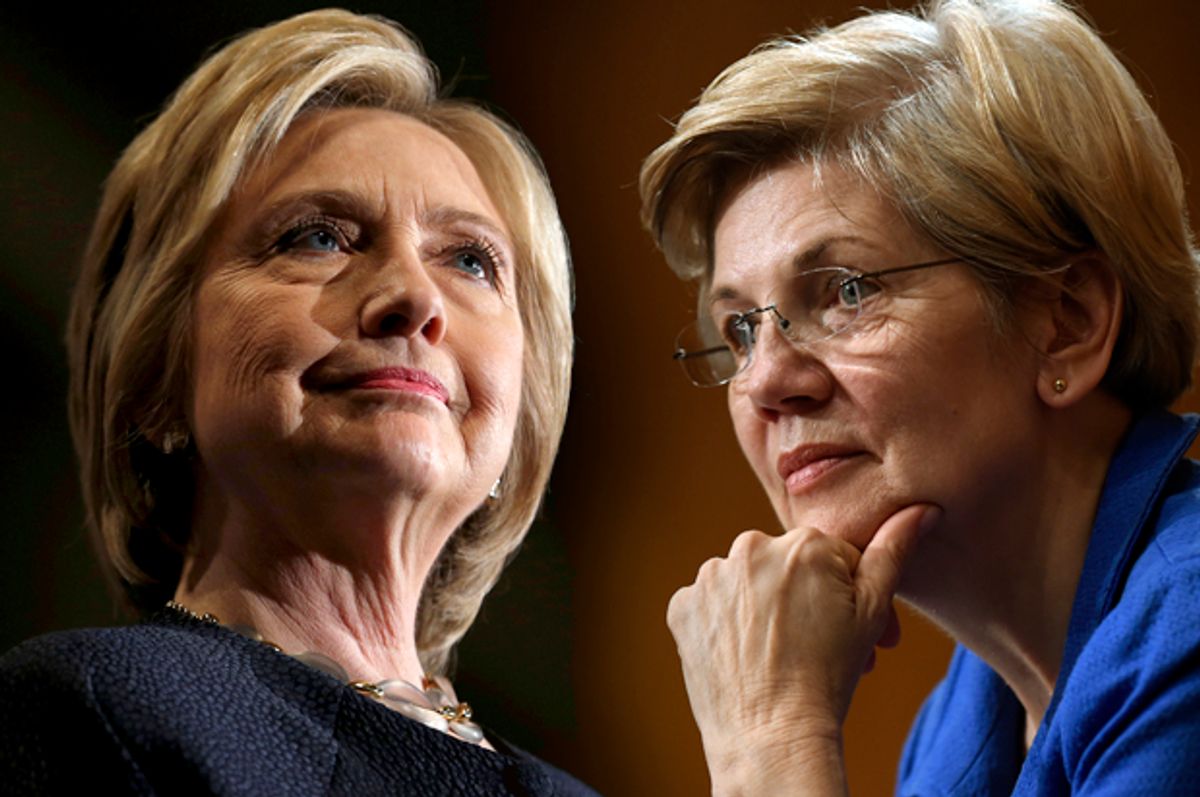 This is not a test: The internet is going bonkers over reports that Hillary Clinton has invited Elizabeth Warren to her house for a meeting.

Going nuts because such face-to-face meetings in someone's home during campaigns are frequently the harbingers of a running mate announcement. Warren is wildly popular amongst Democrats, especially those who put a priority on fighting income inequality and the shenanigans of Wall Street and other capitalist vultures who have done so much damage to our economy. Because of this, there's been chatter for months about Warren as a potential running mate for Clinton, to shore up Clinton's image as a true progressive and to keep these issues at the forefront of the campaign as Bernie Sanders does his fade-out.

But there's also been a chorus of skeptics, and I've been one. Not because of any objection to Warren herself! On the contrary, I'm a massive Elizabeth Warren fangirl who pins gold stars and hearts to her picture that I have hanging over my bed.

No, it's because Warren is such a rock star that I and so many others have expressed doubts. While the presidency gets an undue amount of attention from both the media and the voters, the reality is that the Senate is an incredibly important institution and we need people like Warren in it, fighting the good fight. Warren is one of the most effective senators in Congress, despite being in the minority. She's helped keep the focus on economic justice and lay the groundwork for the Democrats to make big moves on things like expanding Social Security benefits, if and when they get in the majority again. Leaving the Senate, where she's been such a powerhouse, for the vice presidency, where she won't be writing legislation, would be a huge loss for the country.

But screw it. My heart soared when I saw that Clinton and Warren were having a meeting and I realized that I really, really want this. Yes, losing Warren as a senator wouldn't be great, but there's so much to be gained from having her as Clinton's running mate that it's worth it. Here are the reasons why:

1) After a bruising primary, the threat of a Donald Trump win means the Democrats need to unify the base. There are still a lot of bruised egos and sore feelings after Sanders lost the primary to Clinton. Picking Warren as a running mate would definitely read as an olive leaf to Sanders supporters, who, as anyone who ever dared mention their support for Clinton during the primary can attest, were universally swift to pick Warren as the woman they'd support if she ran.

Sure, some of them were just saying that, using Warren as a shield against accusations of sexism while assuming, incorrectly, they'd never have to put their money where their mouths were. But plenty of them were sincere and will read the Warren pick as evidence that Clinton is serious about her commitment to progressive values. And even those who were using Warren just as a shield will be forced to either support her like they said they would, or be exposed. But that's okay; their votes spend just as good as their more sincere counterparts.

2) Warren is a better spokesperson for economic justice than Sanders. For those who want income inequality and financial corruption to continue being premiere issues of the campaign — a group that includes me —  having Warren on the trail is even better than having Sanders out there. Warren has all of the fire and passion that Sanders brings to the issue, but she's much better than he is about speaking to the particulars of the issue. She's also better at rooting her discourse in the pressing needs of voters. "Break up the banks" is a goal that's hard to attach to people's everyday lived experiences. But Warren is an expert on consumer issues and speaks easily and clearly about the direct ways that financial institutions screw over the little guy with shady products.

Plus, Warren comes into this without any baggage. Sanders and his surrogates just simply said too many nasty things about Clinton during the primary to shake it off so quickly. Warren has a clean slate that will make it a lot easier for her to put her full weight behind the Clinton campaign.

3) Two women are better than one. I'm a vagina-voting, Bikini Kill-record-collecting cat lady of the first order, but even I would usually hesitate at the idea of the first female nominee for president picking a female running mate. One woman vying for power makes a lot of people queasy, but put two together and you run the high risk that they're going to be accused of being a coven of witches.

But that would be in a normal election cycle. In this election cycle, the opponent is Donald Trump, a thin-skinned fraud who probably didn't even realize, until he jumped in the race, that women are permitted to age past their 50th birthday. He's so uniquely unqualified to be president that many voters will think a literal coven of witches would be a safer choice.

More to the point, having not just one, but two women campaigning against him doubles the odds that Trump, who clearly cannot stand the idea of women talking back to him, completely loses his shit. Think of how out of control he is with Judge Gonzalo Curiel over the release of a few embarrassing documents. Having two women calling him a fraud and a racist who is too unstable to be trusted with the nuclear codes will be an unbearable amount of pressure on him.

Warren is clearly primed to be the attack dog, too, having turned up the volume on her attacks on Trump in recent weeks. A two-pronged approach, with Warren being the attack dog while Clinton plays the role of someone who is just laughing at Trump the silly clown will steadily chip away at his resolve not to let loose with a string of choice slurs that will lose him voters.

4) Warren is better poised than most to redefine the vice presidency. Warren is, above all things, a clever politician. She doesn't just advocate for progressive values, but finds creative solutions to get there. The Consumer Financial Protection Bureau was Warren's idea, for instance, and a good example of how she gets past talking in broadsides and slogans and really sinks her hands into creating solutions.

She's really carved out a unique spot for herself in the Senate, and it's easy to believe she could do the same as the vice president. Not in a power-behind-the-throne way, like Dick Cheney. But, just as Joe Biden has used the office to conduct a high profile fight against campus rape, Warren would likely come up with smart ideas to use the visibility and organizing potential of the office to push for economic reforms to help ordinary people. Working with Clinton, who is also good at creative thinking, they could come up with ways to use executive power to work around the obstructionism of a Republican-run congress.

So yeah, consider me onboard the Elizabeth Warren-for-VP train. The ride is just too exciting to consider something a little more mundane.