Nobody needs an AR-15: The Orlando massacre teaches us (again) that we must ban semi-automatic human killing machines

Do it now: Congress must ban military-style weapons and make it harder for terrorists to act on their hate 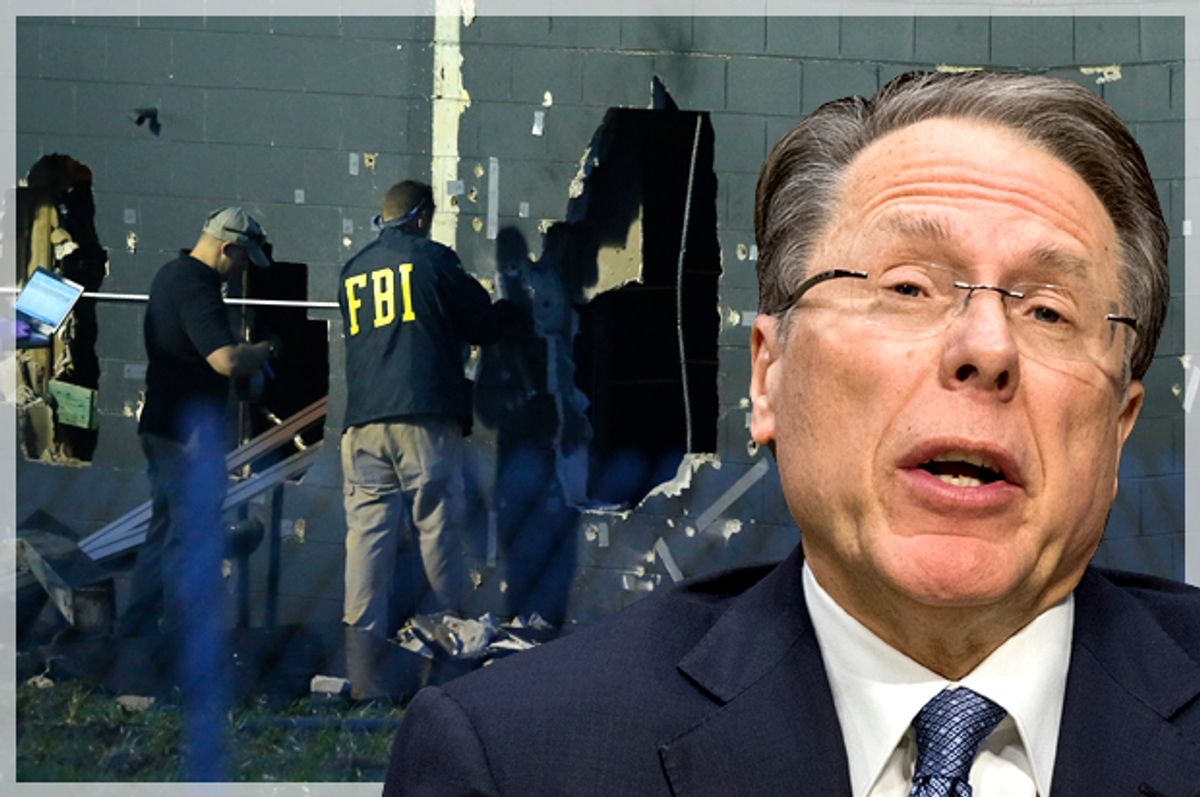 I just came from a meeting today in the Situation Room  in which I have people who know we have been on ISIL websites, living here in the United States, US citizens, and we're allowed to put them on the no fly list when it comes to airlines, but because of the National Rifle Association I cannot prohibit these people from buying a gun. This is somebody who is a known ISIL sympathizer and if he wants to walk into a gun store or a gun show and buy as much, as many weapons and ammo as he can, nothing is prohibiting him from doing that even though the FBI knows who that person is. So sir, I just have to say respectfully that there is a way to have common sense gun laws, there is a way to make sure that lawful, responsible gun owners, like yourself, are able to use it for sporting, hunting, protecting yourself. But the only way we're going to be able to do that is if we don't have a situation where anything that is proposed is viewed as some tyrannical destruction of the second amendment. And that is how the issue too often gets framed --- President Obama, June 2, 2016

We've had yet another horrific mass shooting. In fact, it's the worst mass shooting in American history. More than fifty people were killed and many more wounded in a nightclub that catered to gay people in Orlando Florida. At the moment I'm writing this, what we know is that these murders were carried out by an American Muslim by the name of Omar Mateen, the son of Afghan immigrants who was born in New York 29 years ago. We know that he called 911 during the killing and reportedly pledged allegiance to ISIS and mentioned the Tsarnaev brothers (who were not ISIS, for what it's worth). We know the FBI had been aware of some radical connections and jihadist "leanings" and had interviewed him in the past. His father reported that he was an angry homophobe. His ex-wife said he was a violent domestic abuser who was mentally unstable. He was a hate-filled, violent piece of work.

And we also know that he had earlier been given a firearms license and a concealed carry permit in Florida. Earlier last week he walked into a gun store and walked out with a hand gun and an AR-15 semi-automatic rifle with the capability of mowing down a hundred people in a matter of minutes. And that is what he proceeded to do.

President Obama's statement above is a partial answer to a question put to him in a town hall ten days ago in which a gun store owner asked why he and Hillary want to control and restrict gun ownership from "good guys". The president explained that he and Hillary aren't trying to confiscate anyone's guns but rather that they are trying to mitigate the carnage much the same way that we mitigated the carnage of auto crashes. (I would argue we need cars a lot more than we need guns.) And then he made that statement about the NRA's adamant insistence that government cannot prevent even suspected terrorists from buying as many guns as they want.

I've always been surprised that this hasn't caused more controversy about this since 9/11 but perhaps the fact that most of our distressingly regular terrorist mass shootings since then were not carried out by Muslim extremists. The normal reaction among gun proliferation advocates is to treat these events as if they are a natural disaster like a tornado or an earthquake. A mentally ill man armed to the teeth goes into a movie theater and kills 12 people and injures seventy more. A troubled young man whose mother bought him a cache of weapons kills her and then brutally murders 20 first graders and 6 of their teachers for no apparent reason. A frustrated young man goes on a killing spree to punish women for rejecting him and to punish sexually active men for living a more enjoyable life than his. Here on the other side of the country from Orlando, the Santa Monica police  today caught a man just half a mile from my house, armed with three semi-automatic rifles and some explosives who said he was headed to the LA gay pride parade to kill people.

All of them use guns to kill but the gun rights zealots shrug and say the only thing we can do is arm the "good guys" so they can shoot the "bad guys."

But now what appears to be a "lone wolf" terrorist, who was even a licensed "good guy" by the state of Florida, just perpetrated the worst mass shooting in American history. And we don't see the gun advocates shrugging this off as if this was an unpreventable act of God. In fact, we can look to the man the NRA just endorsed to see the reaction:

He also put out a statement, which included this:

Because our leaders are weak, I said this was going to happen – and it is only going to get worse. I am trying to save lives and prevent the next terrorist attack. We can't afford to be politically correct anymore. The terrorist, Omar Mir Saddique Mateen, is the son of an immigrant from Afghanistan who openly published his support for the Afghanistani Taliban and even tried to run for President of Afghanistan. According to Pew, 99% of people in Afghanistan support oppressive Sharia Law. We admit more than 100,000 lifetime migrants from the Middle East each year. Since 9/11, hundreds of migrants and their children have been implicated in terrorism in the United States. Hillary Clinton wants to dramatically increase admissions from the Middle East, bringing in many hundreds of thousands during a first term – and we will have no way to screen them, pay for them, or prevent the second generation from radicalizing.

(Yes, he actually wrote "Afghanistani Taliban" in an official statement.) But as you can see, he still plans to ban Muslims from entering the country. The question is what he plans to do about the Muslims who are here already --- Americans like Omar Mateen or his father, who is a legal immigrant. It's a fair question to ask because he insists that any mass shooting by a Muslim must be met with a draconian solution like a ban or stepped up surveillance, torture and a policy to "take out their families to find out what they know". Since San Bernardino he has consistently asserted that Sayed Farook's family was implicated in the attacks:

(His lurid imagination also led him to indict other people in the neighborhood based on some sketchy early reporting. It didn't stop him from spreading this rumor around for months.) Considering Trump's accusation in his official statement that Mateen's father is Taliban and the implication that he believes in Sharia law, it's fair to say this family would be in a very precarious position right now if Trump were in the White House. Presumably, whatever he did would be met with little resistance from Trump's followers. But don't ask them to allow the FBI to require a background check before someone like Mateen can buy a semi-automatic rifle capable of killing hundreds at a clip. That would be an abdication of fundamental American principles. The idea that we might want to think about the common sense policy of banning the sale of these semi-automatic human killing machines to anyone might as well be message from Mars. In fact, for half the country it makes more sense to ban 1.4 million people from entering the country on the basis of their religion. Would a ban on semi-automatic rifles end Islamic extremism? No. But it won't make it worse, the way that religious bans and calls for torture and killing of suspects family members will. And it would sure make it a lot harder for any of these twisted souls, Muslim or otherwise,  to spray bullets at a room full of first graders or movie goers or gay guys dancing the night away. You can't fix what's in these people's hearts. That is beyond anyone's ken. But you can make it harder for them to act on their hate. Nobody needs an AR-15.

Congress's heartless, intentional silence has become a quiet message of endorsement to would be shooters contemplating mass murder.