"Straight-up 'Lord of the Flies’”: New series "Wrecked" is a funnier, darker "Lost" 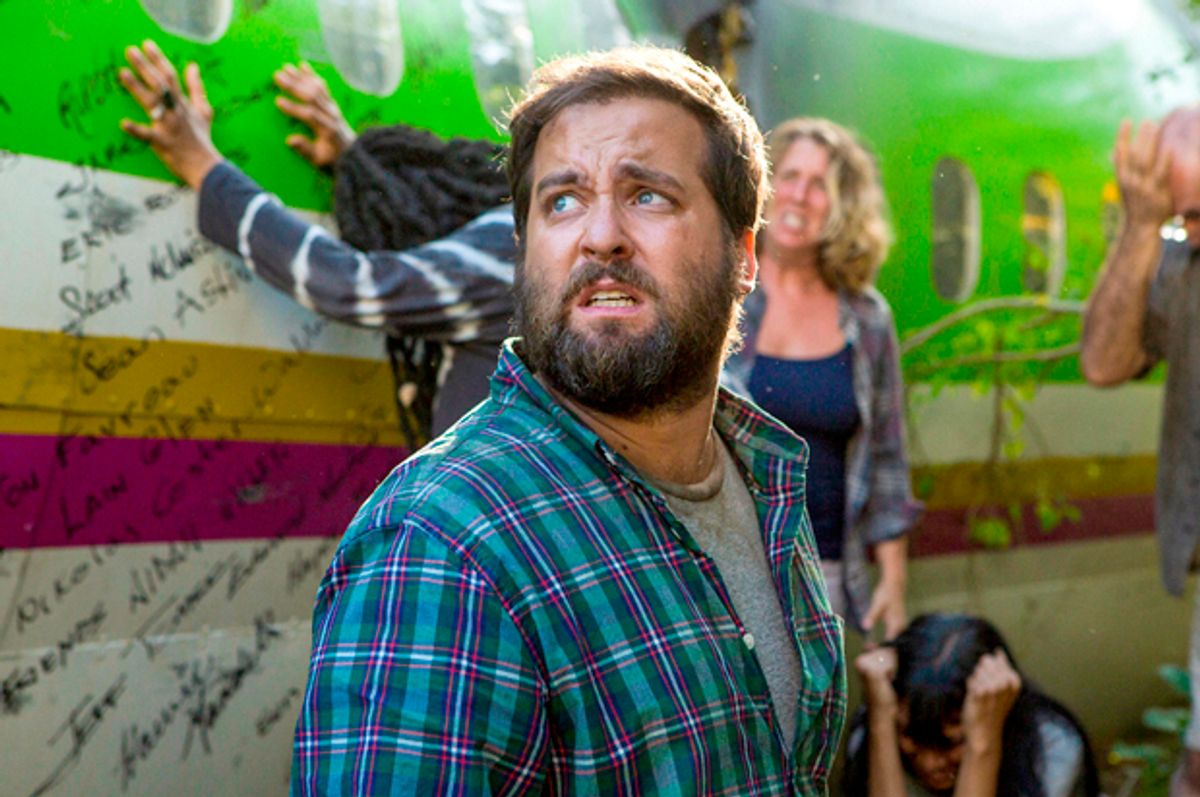 The elevator pitch for the new series “Wrecked” is that it’s a comedic version of “Lost,” which is more or less the case for the first episode or two. But stick around: “Wrecked” gets dark.

The first episode, which airs Tuesday night on TBS, is a bright, energetic take on a plane crashing on a deserted island in the Pacific Ocean shows, with flashes of the darker times to come. Many did not survive the crash, and man do they stink.

“It’s like ‘Lord of the Flies’ in that it’s about a micro-society slowly descending into chaos,” says Zach Cregger, who plays one of the castaways. “It’s got violence and revenge and cannibalism.”

Adds co-star Jessica Lowe: “We have to get rid of the bodies to keep them from spreading disease. When we have this beautiful moment around the campfire, it smells terrible. That’s an example of keeping it grounded but slightly heightened so that it’s not too tragic.”

Cregger and Lowe sat down with Salon to talk about their experience making “Wrecked,” how the series fits into TBS’s post-streaming reboot-in-progress, and how the show balances comedy with the realities of life after a plane crash.

There are a lot of callbacks to “Lost” in the first two episodes, but the show moves into its own space pretty fast. Could you tell that was happening as you were shooting?

Zach Cregger: I never watched “Lost.” I knew that James Scott’s character, the hero who dies in the first episode — I think I can give that away — was a nod to Matthew Fox’s character on “Lost.” Other than that, I wasn’t aware of a lot of those callbacks.

Jessica Lowe: Later in the season, it’s a complete departure from “Lost.” It’s straight up “Lord of the Flies.”

Showrunners Justin and Jordan Shipley are in their mid-20s, and this is their first series. Did you first meet them during auditions?

Lowe: Yes, and it was a total shock. You go into a producer session, and the creators are usually grizzled 40-somethings. We walked in and saw these sweet, fresh-faced babies. I was truly shocked.

Cregger: Jordan was a bagboy at Trader Joe’s when this show came through for them. They wrote this script on spec to have a writing sample to send around, and it got into the right hands. Jordan was bagging groceries, and this show comes through with a great budget. It’s an insane story.

Zach, how many pilots have you written that never made it that far?

Cregger: I’ve written a bunch. I wrote two pilot scripts that got shot but didn’t get picked up, and I wrote more that never got shot. Anytime a show gets greenlit, you’re hitting the jackpot. I hope they’re not spoiled because this isn’t how it usually works.

Everyone on the show has been in pilots that didn’t go forward and shows that didn’t make it past the first season. Did the fact that TBS was in reboot mode make you more nervous about the show’s prospects, or do you always feel uncertain about a pilot?

Lowe: I’m never sure a pilot will even happen until I’m on the plane. I’ve done five pilots that will never be seen. This project was special and has a big team with a funny cast. I always think things are going to fail, but I had a really good feeling about this one.

Do you think “Wrecked” has a tonal consistency with TBS’s other new shows?

Cregger: “Angie Tribeca” is kind of a “Naked Gun,” slapstick-y show, and “The Detour” is more of an adult road trip. “Wrecked” is different than both of those shows, and there’s something commendable and interesting about a network that’s willing to take risks and go in different directions. The new TBS feels much cooler than the old TBS. I sound like a corporate shill, but I’m telling the truth. There had never been a TBS original series before this year where I felt like I was the target audience. It’s a little more mature, a little more thoughtful than before.

This sounds weird to say, but the crash scene in the pilot looks like it was fun to film. Can you talk about shooting that?

Cregger: Oh my God, it was like 130 degrees in that place.

Lowe: It was the hardest I’ve ever laughed on a show. We had this giant fan blowing in our face, and the director James Griffiths would yell, “OK, left! Right!” And they were throwing these shards of fiberglass at us to make them look windblown.

Cregger: We reshot some of those scenes from the original pilot. In the original pilot, Rhys Darby had a dog that was bigger than I am, and it was sitting on his lap in this plane that was 130 degrees. And it wasn’t a trained, show-business dog. It was just somebody’s young, aggressive, giant dog crawling all over Rhys. He was so miserable with this dog barking in his face. It was the hardest I had ever laughed in my life.

Was that an airplane set that shows use for scenes like that?

Cregger: No, it was an actual airplane in a hanger. We drove two hours from San Juan to this military airport and shot in a plane.

What were your sets like in Puerto Rico? Did you shoot everything outside?

Lowe: We shot almost everything on the beach. The first week, a big wave took one of our cameras.

Cregger: We also had to shoot with part of the fuselage out at sea one day, which was a huge ordeal. Some of the actors got destroyed by mosquitos. It was a fun shoot, but it was brutal.

Did flying back and forth from Puerto Rico to Los Angeles feel any different after seeing a crashed plane on the beach for weeks on end?

Lowe: People will ask me on flights what I do, and it’s really awkward to tell them about the show.

Jess, when you and I talked last fall at Funny or Die before you started shooting “Wrecked,” you were making a show for Snapchat. Are you still pretty active on Snapchat?

Given that “Wrecked” is a younger skewing show, is there going to be a big video, social media component?

Lowe: We just had an event that TBS threw for us with social media influencers. We had a big party on the beach, and that night we had a DJ spinning music out of the cockpit of a plane. The hashtag is #GetWrecked, and TBS asked people to hold their posts until closer to the premiere.

The show walks a pretty fine line between satire and the reality of being on a deserted island. There’s funny bits like a character named Curt Turdhole, but there’s also dead bodies in the first episode. Was there a sense of keeping a balance of those two things?

Cregger: You have to keep one foot on the ground, or the comedy won’t land. Most of the funny moments come because they’re grounded by this horrible circumstance.

There’s a scene in the fourth or fifth episode, Zach, where you’re crapping in the woods and another of the castaways won’t leave you alone. That’s not the sort of thing that happened on “Gilligan’s Island.”

Cregger: There are scenes later of guys having to take care of another bodily function, so I’m very excited about my family watching that.

Would that be a bodily function of the “Something About Mary” variety?

Cregger: Yes, it would. I like the beginning of the season, but I’m excited to get to the back half of the season. The show gets really, really dark.

Lowe: In such a crowded space of shows, I think this one stands out because it has elements of action and adventure. In the back half of the season things really go bananas, and it’s really great that TBS and the Shipleys would go so dark at the end.

Are you in production yet on a second season?

Lowe: Not yet, but we’re crossing our fingers.