The discussion we must have: Whether it's a terrorist, a sociopath or a stalker — their access to guns is our biggest threat 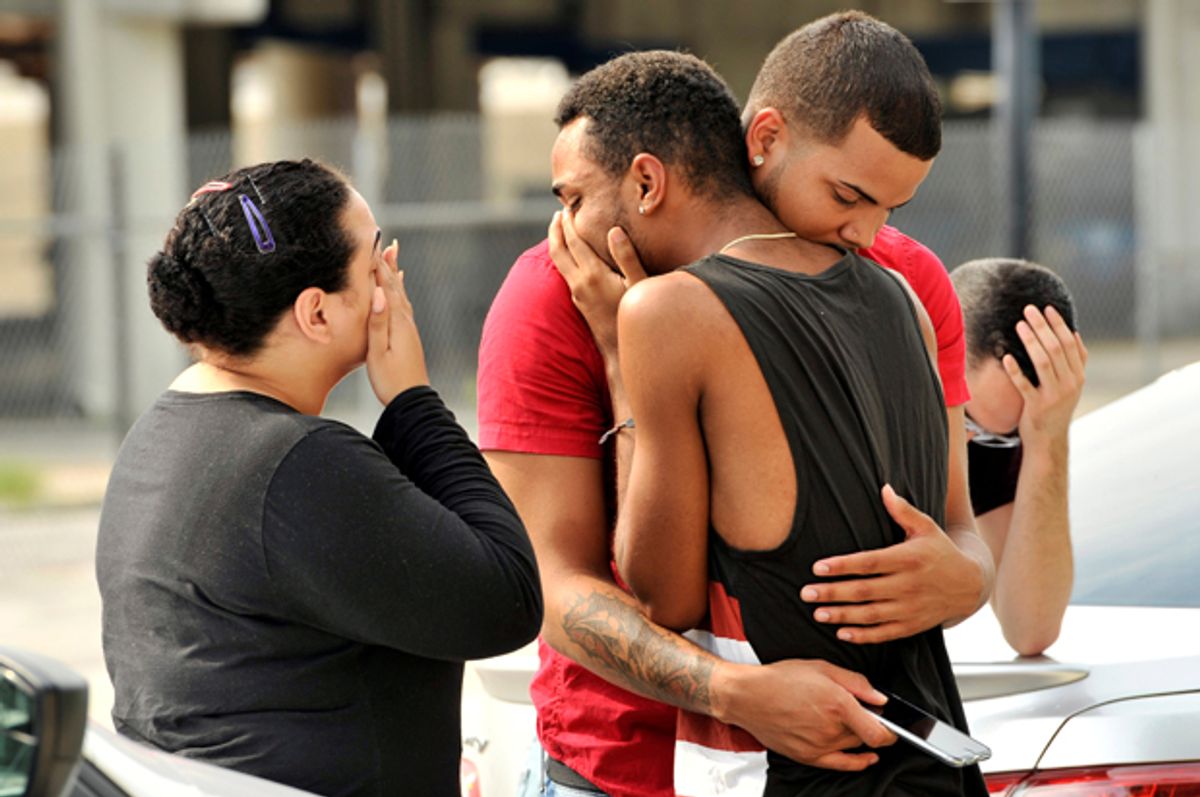 Friends and family members embrace outside the Orlando Police Headquarters during the investigation of a shooting at the Pulse night club, Orlando, Florida, June 12, 2016. (Reuters/Steve Nesius)
--

Two straight days we woke up to news of horrific shootings in Orlando.

The slaying of more than 50 in a club on Sunday by a man who pledged allegiance to Isis and the murder of Christina Grimmie the day before  left me too depressed and unsettled to be angry. When you wake up two straight mornings to such tragedies, numbness is going to midwife those first two emotions and cloud out the third.

Two years ago I was working as a copywriter for NBC Digital, where I was assigned to produce website content for “The Voice.” I never met Christina Grimmie, but doing my job required that I watch every single second of Season 6 of the show. And because I saw every moment of her screen time, and because she made it all the way to the final episode, I knew her in the way that fans feel they know and like someone on television. Her name probably had not crossed my mind between the end of Season 6 and Saturday morning, when I read about her murder. Grimmie, 22, was gunned down after performing at an Orlando venue by a young man who walked up to her after the show and opened fire. No one as yet knows why, but so far authorities do not believe she knew her killer, Kevin Loidl. This young man had a problem and, like so many people in this country, he thought a gun held the solution.

Sunday morning I woke up to news of another shooting in Orlando, one that dwarfs the killing of Christina Grimmie in scope and horror. Omar Mateen, an American-born child of Afghani immigrants, shot 103 people, killing 50 of them.

It has happened many times before, but it still seems unfathomable that anyone can have such bottomless contempt for human life as to shoot one person in cold blood, let alone 103. It seems unfathomable that anyone can kill another human being – or 50 other human beings – for any reason, no matter how much he needs to twist his ideology to justify it, or how much anger he is carrying around.

But at heart, the two Orlando shootings are not so different in their motivations. Both shooters were young men. Both were angry enough about something that many of us might carry around, but are not driven to murder over – a shunning by a minor celebrity, a religious or personal aversion to homosexuality, a failed marriage.

And in the end, both men looked at guns and saw the solution. America is not the only country where people do that, but it is far and away the only one among what we have long called First World nations – those industrialized democracies that like to pretend they are more civilized, whatever that means in this context. Alone among those countries, it is Americans who have simple access to AR-15-like weapons that can fire off 30 bullets in under 10 seconds. It is Americans who fetishize these weapons and our right to own as many of them as we want. It is Americans who, more than anyone else, turn to guns when we are angry or scared or both.

And yet, it feels completely hopeless to yell at our leaders about guns right now, to demand – again, and probably fruitlessly – that our elected representatives in the states or in Congress do something, anything, about them. The response, or more accurately, the lack of response to this shooting in terms of gun regulations or more mental health services or more resources to find and identify people in our society who are swirling down the drain, is as predictable as the sunrise. And even if someone had taken away Omar Mateen’s guns sooner – he apparently has a history of domestic violence against his ex-wife, though as of now there is no word on whether authorities were ever aware of it – he would have easily been able to get his hands on more illegally. There are too many guns in circulation and too many angry and scared people in this country who look at them as a solution instead of a problem.

Nor does it feel worthwhile to bother parsing motivations, separating and assigning them to neat little categories, as people are doing on television and social media right now and will continue to do for weeks or months more. Was Mateen a Muslim jihadist who pledged his loyalty to ISIS in a 911 call just before he started shooting? Was he a guy whose anti-gay animus was more personally than religiously motivated, to the extent that one can separate out the two, and who finally snapped? Was it Islamic terrorism committed as an act of revenge against or resistance to our country’s never-ending wars in Muslim countries? Or was it an anti-LGBT hate crime driven by religious animus against gay people, which has been a particularly potent force for hate in our society, and has been much in the news lately with the fight over transgender bathroom laws, even if the fomenters of that hate were Christian leaders and not Muslims?

These are important questions to many people. I find them totally uninteresting. There was an American who was angry about something. He had access to a gun that could rapidly fire lots and lots of bullets as fast as he could pull the trigger. Whatever he was angry about was a problem of paramount importance in his mind, and like millions of his fellow Americans, he saw that gun and the violence he could commit with it as the solution. Mateen and Loibl were not the first Americans to come to that conclusion, and they will not be the last.

I have written many times about guns and the people who love them, often in a mocking and snarling tone, because I find America’s gun fetishization so absurd. But it is not going away, even though it is a bigger barrier to any kind of regulation than the sheer number of guns floating around the country and the logistical impossibility of accounting for them all. Doing anything about guns and the epidemic of gun violence in this country requires that we recognize that and find a way to change the dialogue around us. It requires that we recognize the psychological and physical and economic toll guns take on us, and decide whether it is worth the ongoing love affair with the damn things.