The system is failing: Donald Trump's rise and the erosion of the rule of law 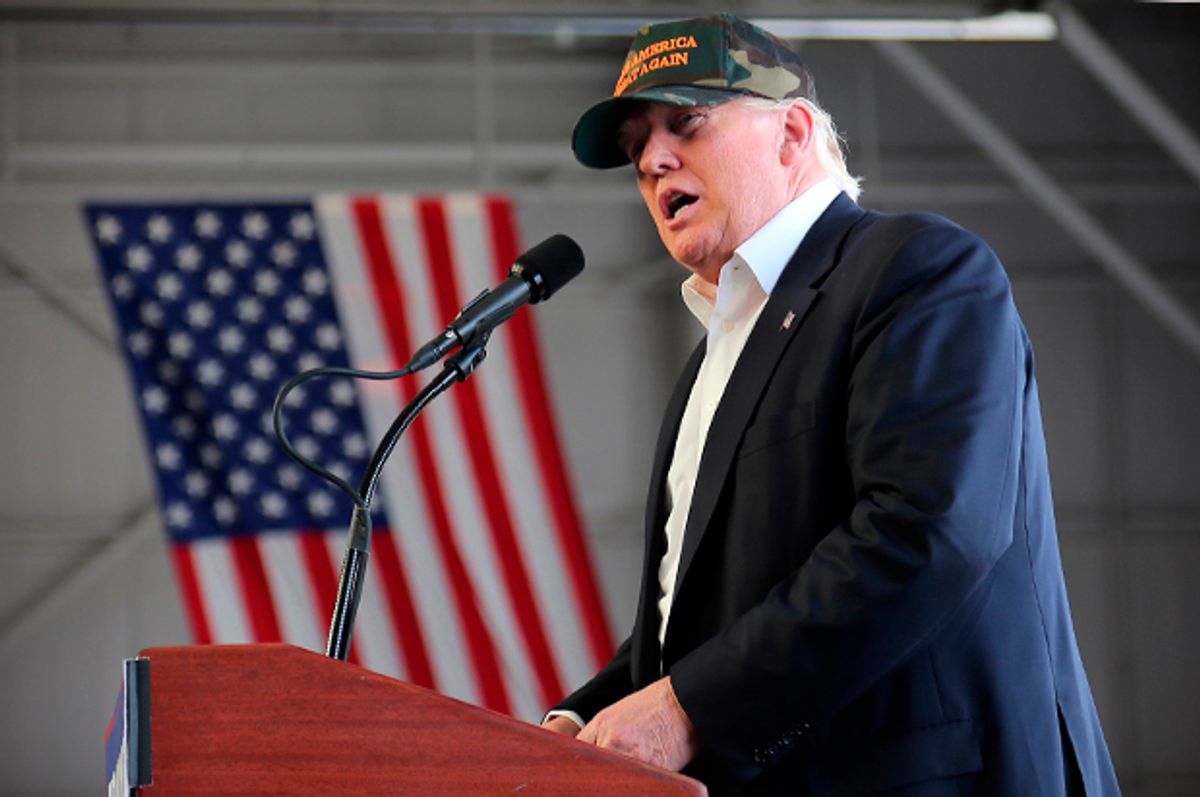 Recently The New York Times wrote in a menacing headline “Donald Trump Could Threaten U.S. Rule of Law, Scholars Say.” Of course, this alarmist warning from the perch of the protected elite suggests this country is currently operating under the rule of law and the Constitution.

It must be great where they live.

Just as the media and the elite failed to see Trump and his throng coming, they fail to grasp that his rise to power is a sign of the erosion of the rule of law and our collective faith in all our systems, including the justice system.

Throughout history, the rise of "strong men" like Trump comes with a clarion call for the restoration of law and order. It is not the portent of its future demise, but a concrete sign it has already collapsed.

Trump’s rise to power comes on the heels of decades of decline of our critical institutions. Internal corruption scandals have blown up in the church, the rarefied halls of higher education, corporate boardrooms, state capitals, even our nation’s capital.

Stories like the criminal conviction of former House Speaker Dennis Hastert, a “serial child molester," for using hush money to silence his victims, has just become part of the background noise populated by the latest antics of former New York Gov. Eliot Spitzer.

Convicted public officials at the local, county, state and federal level  go on to have second careers as consultants. Ever since President Bill Clinton pulled it off, elected officials have learned you can live with scandal, like a chronic illness. It doesn’t have to be a professional death sentence.

Shame is a Victorian convention.

We live in a time where th  higher up you are in the ruling hierarchy, the less likely you will actually be held accountable for anything, no matter how spectacular your failure.  Jump a turnstile you get tackled, pocket an entire economy and its velvet rope treatment all the way.

It doesn’t matter what arena, the bigger your screw up the more likely nobody in power will say anything. It can be the bankers who collapsed Wall Street or the architects of the war on terror.

Case in point, for a generation we have been prosecuting a costly sprawling global war on terrorism that has actually proliferated terror, not contained it. Yet, our leaders consoled us that at least "by fighting them over there" we kept them at bay from striking here in our homeland.

And then there’s the civilian carnage of San Bernardino and Orlando. So, do we see the media going back to the war on terror cheerleaders and confronting them with the latest real-world evidence their strategy is failing?

This across the board disconnect between actions and consequences has the public clamoring for some kind of accountability.

Yet, systemic corruption is only part of it.

Here in the U.S., the erosion of the rule of law, and any semblance of righteous equity, has been well underway for decades. How else do you explain the through line between slavery, Jim Crow and today's mass incarceration of a generation of men of color that was turned into a multi-billion dollar business at the expense of African-American families and communities?

The response from our mainstream press and our political parlor, exemplified by Joe Scarborough, is to note this, as if it were merely a rounding error. "Shame about that’ is the collective retort to stats from the NAACP that “African Americans now constitute nearly 1 million of the total 2.3 million incarcerated population and that they are incarcerated at nearly six times the rate of whites.”

According to the Sentencing Project, a non-profit advocacy group, odds are one in three that an African-American man born in 2001 will end up being incarcerated at some point in his life. For Latino men, the odds are one in five and for white males it's just one in 17.

And, as well documented, this high rate of incarceration for African-American men that was driven by the war on drugs, has produced a situation where “five times as many whites are using drugs as African Americans, yet African Americans are sent to prison for drug offenses at 10 times the rate of Whites,” according to the NAACP.

As a Duke University psychiatrist told Time magazine, public perceptions about drug use among African-Americans is just entirely at odds with the research.

“Our goal is to alert people to the burden of drug problems and also to how some of our concern about who has these problems may not be true,” says Dr. Dan Blazer, senior author of a study on the topic, and a psychiatry professor at Duke University. “There’s a perception among many individuals that African Americans as a group — regardless of socioeconomic status — tend to abuse or use drugs at higher rate and this [does not support] that.”

But this unfair criminalization of an entire race is just one example where  the HMS America has been floating adrift, untethered from the rule of law and the adherence to her Constitution for decades now.

Consider the irony that The New York Times turned to Sen. John McCain (Keating Five fame) to offer the sanguine reassurance that the very robustness of our “institutions of government” would  “restrain someone who seeks to exceed their constitutional obligations.”

McCain cited the existence of the Supreme Court and the free press as the bulwarks  still strong enough to prevent unconstitutional acts.

But clearly these bulwarks of the republic are impotent to compel McCain and his colleagues to measure up to their Constitutional duty and weigh in on the ever-expanding U.S. global war on terror as the framers intended.

Instead, they're happy to just let it drone on, even as it accidentally takes out the occasional hospital or wedding party, without requiring  the President seek their sign-off.

Yet, even in these chaotic times, there are a few patriots still willing to exercise the kind of leadership that puts something at risk so that the Constitution and Republic might yet endure.

Consider Army Captain Michael Smith, who served in Afghanistan and is now deployed in Kuwait on Operation Inherent Resolve, the campaign against the Islamic State. As NPR has reported, Smith took President Obama to U.S. District Court for the District of Columbia last month.

To Captain Smith it matters that the war is illegal because it lacks congressional authorization and violates the 1973 War Powers Act.

Maybe I’ll write his name in for president.