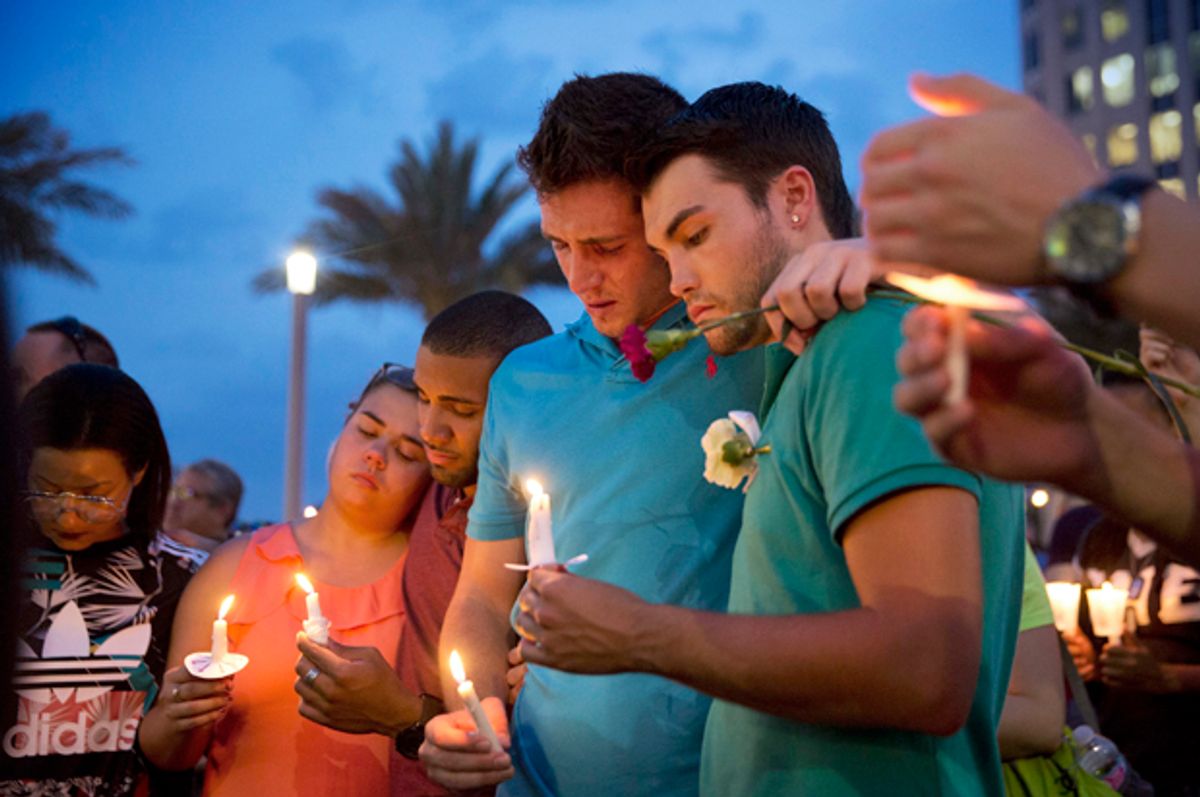 A candlelight vigil for the victims of a mass shooting at the Pulse nightclub, June 13, 2016, in Orlando, Fla. (AP/David Goldman)
--

Tuesday, June 14 is World Blood Donor Day. As the World Health Organization notes in its timely message, "Blood transfusion saves lives and improves health, but many patients requiring transfusion do not have timely access to safe blood."  Yet as this weekend's deadly mass shooting in Orlando has made abundantly, painfully clear, America's guidelines for blood donors are woefully restrictive. And they have highlighted a policy in which, after a devastating attack that targeted the gay community and left 49 people dead and 53 wounded, gay and bisexual men are still severely curtailed from participation. Or as The Advocate heartbreakingly puts it, "While the husbands of men wounded in Sunday's Orlando nightclub shooting are crying and praying, they can't easily offer their spouses the one thing so many others can: their blood."

There was a time when such extreme caution around a particular population of potential blood donors made a degree of sense. In the very earliest days of the AIDS crisis, the ways in which HIV could be transmitted were still being explored. By 1983, according to a history of "HIV and the Blood Supply," "AIDS was occurring in transfusion recipients who did not belong to any known high-risk group." That year, the FDA issued a lifetime ban on blood donation from any man who'd had intercourse with a another man since 1977. At the time, there was not yet even a working test to identity HIV in the blood and plasma.

A lot has changed since then. And understandably, over the past few years there's been a growing demand for the FDA to come join the rest of us here in the 21st century. Three years ago, the FDA was still affirming its policy on behavior based restriction, explicitly putting bisexual and gay men in the same category as "intravenous drug abusers and commercial sex workers." A defiant wave of National Gay Blood Drives — combined with what the Red Cross described in 2014 as "one of the worst" blood shortages it had ever endured — pushed the issue even more to the forefront, and just six months ago, the FDA eased its restrictions. It now has lifted the lifetime ban on men who've had sex with other men, but still refuses to accept men who've had male to male sex in the past year.

Again, let me remind you — there's a test for HIV. We've had it since the EIGHTIES. It's true that the test can't detect a very recent infection of HIV, and it's also true that if someone really wants to lie, he can — in 2008, a "repeat blood donor" Missouri man tested positive for HIV — and was found to have been the cause of HIV infection in a kidney transplant patient.

But none of that makes the FDA's near capricious limits any more sensible. And  in the meantime, as writer Mike Darling observed in 2013, "A gay man is considered more of a threat to the blood supply than a straight man who was treated for Chlamydia, syphilis, gonorrhea, venereal warts, and genital herpes within the past year." And men who aren't celibate are still shut out of performing a service to their own communities -- and to their own boyfriends and husbands -- in times of unimaginable crisis.