Letting Trump and the GOP self-destruct: Hillary and Democrats have the right strategy by laying low 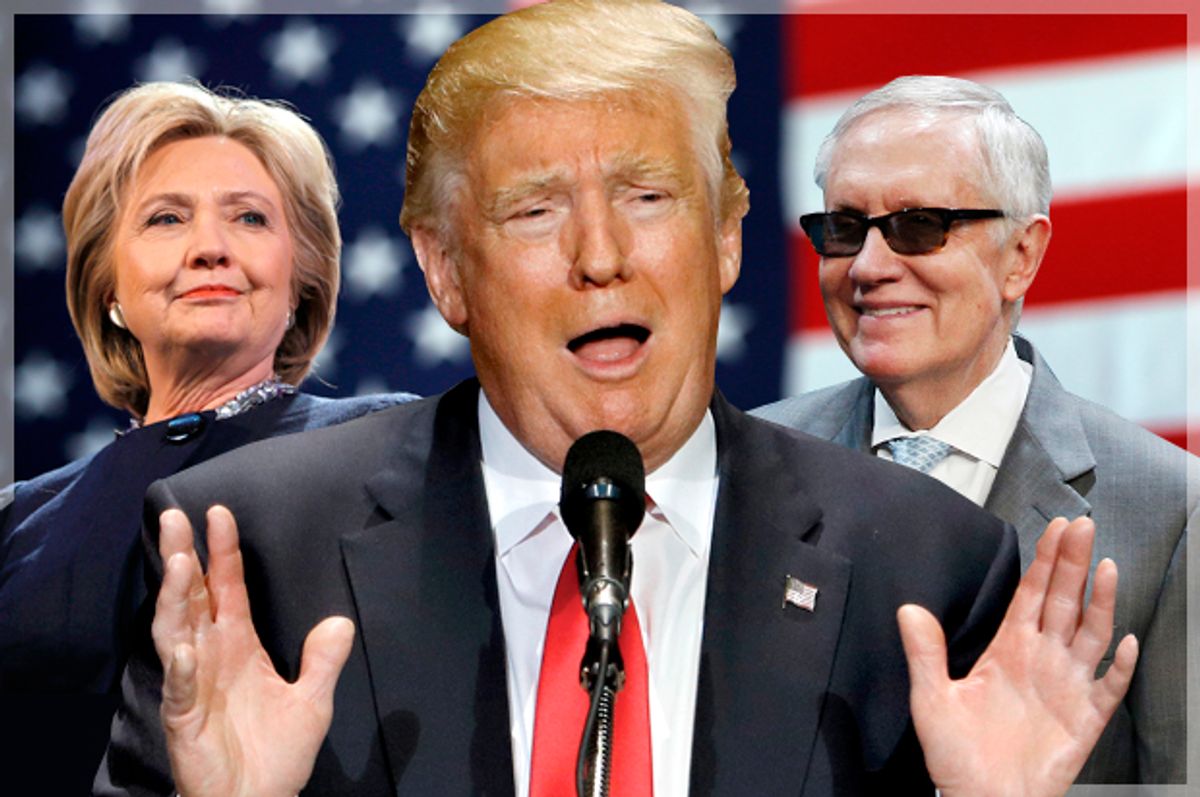 Two weeks ago, I wrote that Hillary Clinton and the Democrats could not afford to take anything for granted this year. Clinton, I argued, is too conventional, too focus-grouped. Her fear of unscripted moments has hindered her ability to connect emotionally with voters. She's an unnatural politician whose penchant for moderation is a vulnerability in this political climate.

To be fair, Clinton has been on the ugly end of Republican attacks for decades – a little guardedness is pardonable. But a play-it-safe approach seemed unnecessarily risky against an omnipresent juggernaut like Trump. The Republican nominee's campaign depends upon free media. In many ways, what Trump says or does with his airtime is irrelevant – the point is to be seen and heard. He can lie and distort with impunity; his supporters don't care and he dominates headlines all the same.

With that in mind, I suggested Clinton's plan to lay low and let surrogates do her bidding was a bad idea, and that she ought to steal the spotlight from Trump whenever and wherever she can. The same, I reasoned, was true for Democrats and down-ballot races.

Well, I was wrong.

Democrats still shouldn't take anything for granted, but I no longer believe there's any reason to compete with Trump for airtime. If we've learned anything in the last couple of weeks, it's that Trump will never morph into a sane, pragmatic candidate. He was never going to conform to political norms, but one assumed he would tone it down a bit as we approached November. Instead, he's quadruple downed on his racist comments about a Mexican-American judge and, more recently, accused President Obama of being a Muslim Manchurian candidate who may or may not be complicit in the recent terror attacks in Orlando.

Now that Trump is speaking to a general electorate, he's paying a higher price for his racist drivel. Indeed, the latest NBC News/SurveyMonkey poll finds Hillary Clinton now leading Donald Trump nationally by eight points (49 percent to 41 percent). This gap will grow as Democrats unify and the Republican nominee continues unraveling in public. Even the political press is challenging Trump in ways that appear to have stunted his momentum.

According to a Politico report, Senate Minority Leader Harry Reid is now encouraging Democratic senate candidates to sit back and watch Trump discredit himself and everyone associated with him, including GOP candidates who've endorsed him. It's a time-tested strategy: When your enemy is imploding, let him. And that's what Democrats are doing.

Calling it a “shock and blah campaign,” Politico reporter Burgess Everett writes: “The blah comes from the Democratic candidates themselves...They're intentionally playing it safe and boring, figuring their elections will mostly be a referendum on Trump and that animosity toward the real estate magnate will put them over the top in key swing states.”

To the extent that Democrats are attacking at all, they're keeping it simple. Every interview, every question, and every speech returns to a common theme: Look who's at the top of the Republican ticket? Is this what the GOP stands for? Is this a candidate Republicans are willing to co-sign? “If there was ever a national election,” said Dem. Senator Chuck Schumer, “This is it.” Trump's campaign is a dumpster fire riding a wave of nativist angst. Why not make every race on the ballot a referendum on him?

What works for Democratic senate candidates will also work for Hillary Clinton. There are obvious differences between senate races and a presidential contest, but the general strategy ought to work in both domains. Clinton will have to face the cameras and engage much more than down-ballot candidates. However, if this is who Trump is going to be, then merely looking and sounding like an adult will be enough for Clinton.