Coming out saves lives: The deadly potential of internalized homophobia is all too real

Living a life of secrecy and self-loathing can lead to deteriorating mental health and yes, violence against others 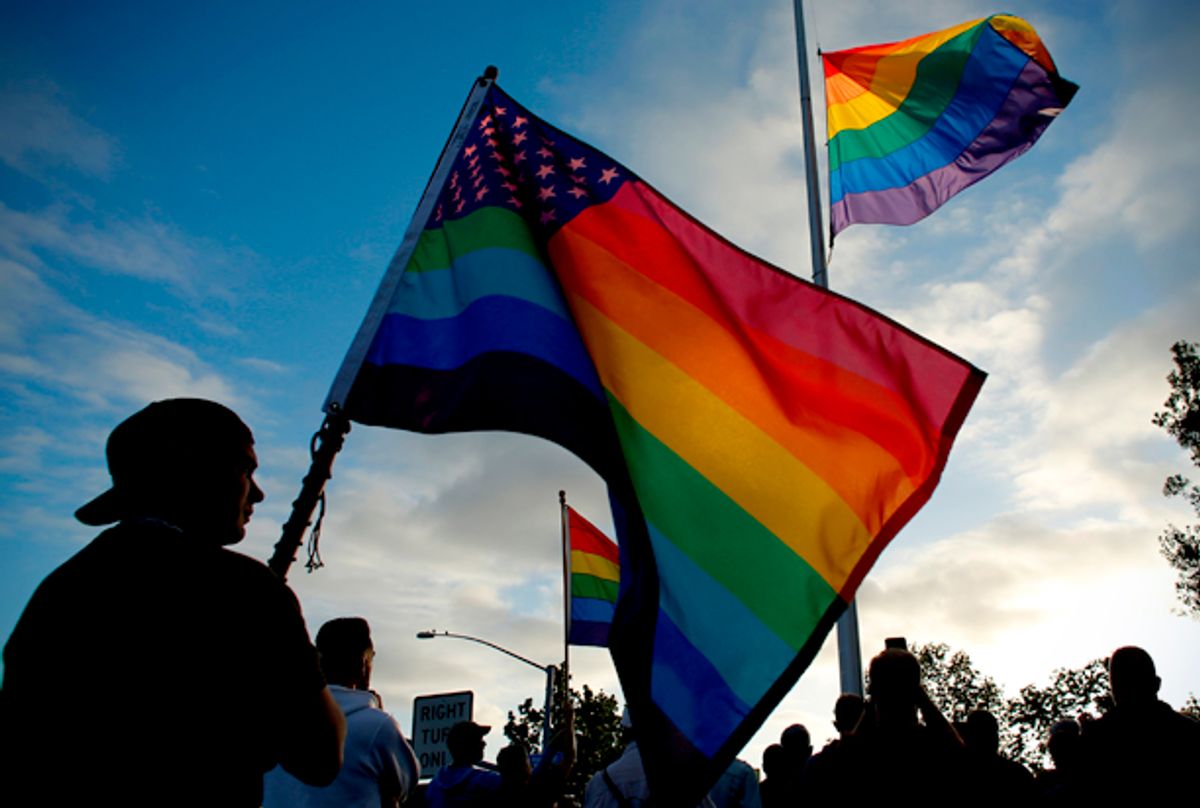 Omar Mateen was the guy at the bar, drinking alone in the corner. Those who describe him as a regular at Pulse, a nightclub located in Orlando, Florida, say that he was prone to making a scene. Ty Smith, who saw him there frequently, told the Orlando Sentinel, that “he would get so drunk he was loud and belligerent.” Patrons remember him not as violent but kind of pathetic, a gloomy character prone to long rants about his father—that is, when he wasn’t offering to buy other men drinks.

Mateen wasn’t just the saddest guy to ever hold a martini. He may have also been gay.

Reports suggest that Mateen, married with a wife and young son, had profiles posted on several hookup websites that cater to gay and bisexual men, including Grindr and Jack’d. (Neither company has been able to confirm if he used their service.) Mateen didn’t go home with the men he chatted with. He was the kind of guy who would only say “Hi,” lurking but never really engaging. More than one man who claims to have chatted with Mateen describes his behavior as “creepy.” Cord Cedeno, who also was a regular at Pulse, told MSNBC that he had to block Mateen on the app. The 29-year-old was wearing a dress shirt and tie in his profile photo.

On Saturday night, that bar erupted in gunfire. Mateen, carrying a SIG Sauer MCX, the kind of semi-automatic, high-capacity assault-type rifle that has become an emblem of American violence, killed 49 people, wounding 53. Six of those shot remain in critical condition.

Seddique Mateen, the shooter’s father, denies that his son’s sexuality had anything to do with the crime, nor does he believe that his son had homosexual leanings. “He wasn’t gay,” he told the Advocate. “I know 90 percent, 95 percent.” Mateen’s ex-wife, Sitora Yusufiy, disputes that claim, stating that his father not only suspected that his son was gay but routinely berated him for it, yelling at Omar repeatedly in front of Dias. Seddique, though, looks at the bloodshed as the ultimate proof of his son’s heterosexuality. “If he was gay, why would he do something like this?” Mateen asked an interview with The Palm Beach Post.

The fact that Omar Mateen was responsible for unspeakable atrocities against the LGBT community is not, however, evidence that he could not have been gay. Internalized homophobia is a brutal, deadly force, one that is responsible some of the worst anti-gay violence in our nation’s history. When UpStairs Lounge caught fire in 1972, killing 32 people, the arsonist was not a stranger to the establishment. He’d been kicked out of the New Orleans gay bar the same evening.

When it comes to the gay community, some of the most profound hate grows at home.

Dionte Greene of Ferguson, Missouri was murdered two years ago by a man he began chatting with online. According to a report from the Guardian, the assailant was initially ambivalent about the encounter; he was in the closet and reticent about risking exposure by meeting in person. “But something changed,” the Guardian’s Zach Stafford writes, “and the ‘trade’ agreed to meet up that night.” The encounter would end with Greene dead in his car, shot in the face by his attacker. He was just 22.

Gay hookup apps and dating websites have made it easier for men struggling with self-loathing to meet up with men they intend to harm. In Saudi Arabia and Egypt, Grindr issues warnings to users that the person they’re chatting with “may be posing as LGBT to entrap you.”

This, though, is not a modern phenomenon. Although Jeffrey Dahmer and John Wayne Gacy are often described as “gay killers,” what drove them to murder innocent people was both a desire for other men and a fear of those very sexual impulses. As a 2011 report from the Wisconsin Gazette argues, Dahmer’s 15 young male victims were not only targets of the killer’s own “internalized homophobia” but also the virulent bigotry in the state’s police department.

The police were notified when 14-year-old Konerak Sinthasomphone was trying to escape Dahmer, drugged and “running naked and bleeding down a street.” Dahmer told authorities the boy was drunk and that the two were having a “lovers’ quarrel.”

The police declined to do a background check on Dahmer or get involved. They even helped the serial killer usher his victim back home. That was not because they trusted Dahmer or were concerned for Sinthasomphone’s well-being. “It was later revealed in police transcripts that while Dahmer was killing the boy, the responding officers were making homophobic jokes and talking about getting ‘deloused’ after coming into contact with gays,” the Gazette reports.

Ted Haggard didn’t eat people. Haggard, an evangelical pastor who formerly preached anti-gay hate from his pulpit, was exposed in 2006 for leading a double life: He was accused of using methamphetamines with a male prostitute whose services he frequently solicited over a three-year span. In the documentary “Jesus Camp,” Haggard stated that his views on queer people were a no-brainer: “We don’t have to debate what we should think about homosexual behavior. It’s written in the Bible!”

“I think I was partially so vehement because of my own war,” Haggard would later say on the subject.

The anti-gay conservative barricading his closet with Old Testament-style hate is one of the oldest clichés in the book, but it’s a cliché because it is so often true. These cases are often anecdotal, but they are many—from Randy Boehning to former New York City mayor Ed Koch, whose long-standing sexuality rumors even made it into his CNN obituary as part of criticism of his handling of the AIDS crisis.

As an Idaho Senator, Larry Craig frequently legislated against the rights of the LGBT community—voting against including sexual orientation in hate crime laws twice (in 2000 and 2002) and workplace protections for LGBT employees. He also supported an amendment to the state constitution in 2006 that would define marriage as between a man and a woman.

A year after voting to ban same-sex unions in Idaho, Craig was caught in an airport bathroom attempting to solicit sex from the man in the stall next to him, who happened to be an undercover police officer.

It’s always the ones who say they have nothing to hide who have the most buried away.

The connection between outward virulent homophobia and living in the closet was supported by a 2012 study from Richard and William Ryan. The researchers showed that men who identify as “highly straight” were disproportionately likely to “indicate some level of same-sex attraction.” The Ryans compared their findings to what Freud called the “reaction formation,” which they describe as “the angry battle against the outward symbol of feelings that are inwardly being stifled.” (A 2015 study on internalized homophobia came to similar conclusions.)

In the case of Mateen, these stifled feelings were compounded by his family life, including his Muslim father’s conservative religious views on LGBT people. Seddique Mateen has referred to homosexuality in interviews as “not an issue that humans should deal with.” He continued, “God will punish those involved in homosexuality.”

Media reports have focused on the red herring of Omar Mateen’s pledged allegiance to ISIS, even though Matten apparently didn’t know the difference between the Islamic State, Al-Qaeda, and Hezbollah. An extreme fundamentalist interpretation of the Qu’ran may have played a part, but his moral education was informed as much by internalized stigma as it was religion. Mateen’s father reports that shortly before the shooting, his son became outraged after witnessing same-sex affection in public. “They were kissing each other and touching each other, and he said: ‘Look at that. In front of my son, they are doing that,’” he said.

It’s difficult to speculate what was going on his mind when he saw others enjoying the love he denied himself. Did he think about a dream deferred, as Langston Hughes once wrote? We don’t, however, really need to speculate; we have research. Numerous studies have shown that living in the closet can be extremely detrimental to one’s mental health, leading to an increased risk for anxiety, depression, harming yourself, or even harming others.

Harvey Milk once argued that it was important for LGBT people to come out—because in doing so, we give others a chance to know us. It’s far more difficult to legislate against people who are your friends, neighbors, and family members. In the wake of the Orlando shooting, an overwhelming amount of people have been opening up about their sexuality on sites like Facebook and Twitter—or posting their stories to the LGBT subreddit. Former child actor and author Mara Wilson, known for her roles in “Matilda” and “Mrs. Doubtfire,” came out as queer in a series of tweets.

Following a week of unimaginable grief and tragedy, coming out has a completely different meaning: It potentially makes the world a safer place.