Dark times ahead in Litchfield: "Orange Is the New Black" returns with its most challenging season yet 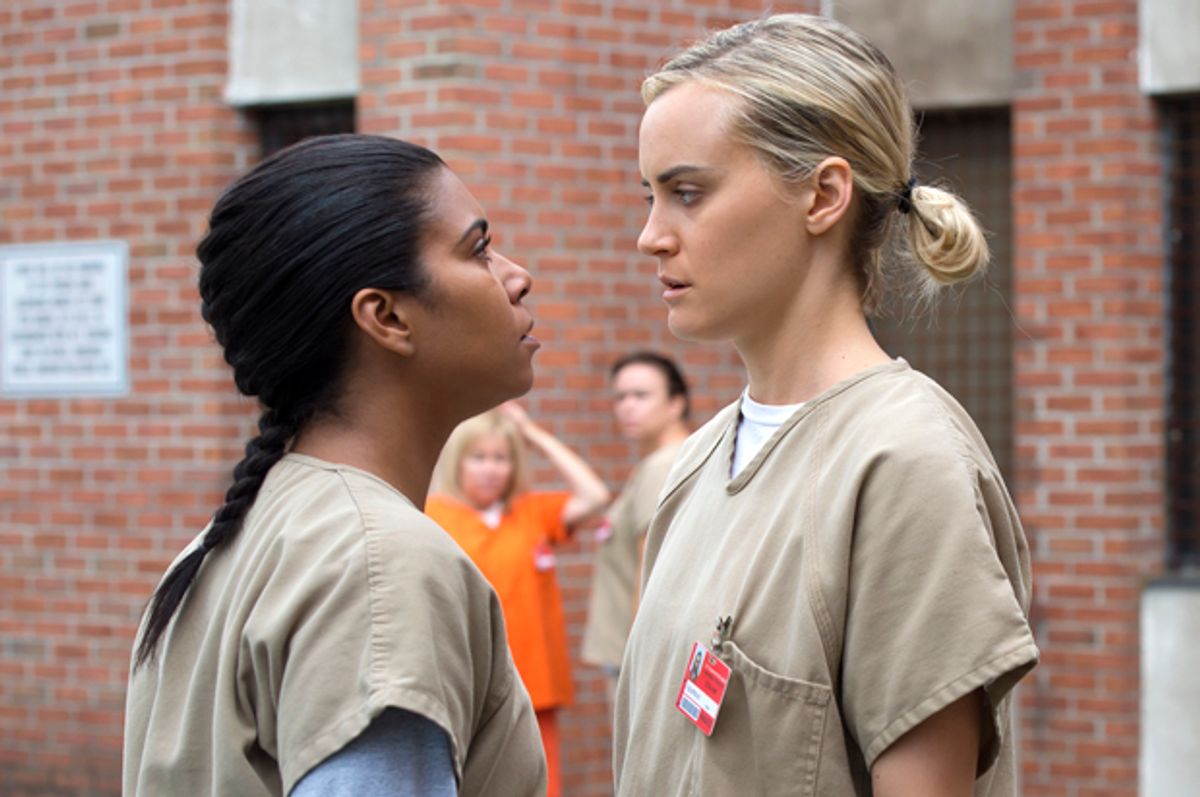 Nobody in their right mind wants to go to prison. But if you absolutely had to do time in your choice of fictional lockup, you’d be sane to choose a prison like “Orange Is the New Black’s” Litchfield Penitentiary.

Life inside Litchfield’s minimum security “camp” looks damn fun at times, especially in comparison to the clinks featured in HBO’s “Oz” or Fox’s far more ridiculous “Prison Break.” Compared to actual prisons – those violent, depressing boxes on display in MSNBC’s “Lockup,” Spike’s “Jail,” or A&E’s “60 Days In” – it might as well be a day spa.

This is not to forget the fact that the place is crumbling around the women serving their sentences there, that it nearly closed, and has seen its share of violence. But Litchfield’s inmates often achieve moments of transcendence too, magical circumstances like the mass jail break in season three’s finale. A hole in the fence surrounding the facility inspires the inmates to joyfully slam through en masse, disregarding the feckless guards who fail to stop their stampeding toward a nearby lake.

Their goal was not escape but rather to steal a few moments of pleasure. Together they laugh and splash, all personal and tribal tensions washing away for few minutes under the sun.

Black Cindy (Adrienne Moore) used the lake to receive the ritual of tevilah, completing her conversion to Judaism. Poussey (Samira Wiley) and Soso (Kimiko Glenn), two outsiders, found one another and floated together. Suzanne, also known as “Crazy Eyes,” (Uzo Aduba) discovers she’s the object of a crush, which is a first – usually, it’s the other way around.

Elsewhere, meanwhile, Alex Vause (Laura Prepon) was being strangled by a hitman, and 100 new prisoners, women not used to such a convivial atmosphere behind bars, were arriving on buses.

Each joyful interlude in Litchfield is purchased by several slops of messy, harsh reality, and that balancing is part of what makes “Orange Is the New Black” feel genuine, if not completely realistic. That sense of honest connection with the drama’s characters and their stories lead many of us to blow through new episodes as quickly as possible.

But the decidedly different emotional space explored in season four, particularly in comparison to previous seasons, could make some viewers take a little more time with it. This new season is more challenging to experience than it ever was, bigger and messier.

This is not to imply that season four is joyless. There’s plenty of absurdity to be found in a place with zero privacy, where maxi-pads are suddenly rare items of value and where, say, the freshly converted Cindy is thrust into close quarters with a devout African American Muslim. And Litchfield is still home of conspiracy theorist Lolly (Lori Petty), who builds a cardboard time machine in the laundry room that becomes a very popular getaway.

Above all of this, the prison’s new corporate overlords are speeding up efforts to increase their bottom line, which means more bodies in the prison bunks without any corresponding increase in resources to manage and care for them.

Naturally, tempers flare and new alliances arise: Moments after everyone returns from the lake, Dayanara’s mother Aledia (Elizabeth Rodriguez ) takes one look at the situation and sums up the situation perfectly: “It’s sardine time, bitches. We a for-profit prison now. We ain’t people no more. We bulk items.”

Up to this point, “Orange Is the New Black’s” phenomenal success has been rooted in its effective usage of Litchfield as a closed society consisting of tribes, “families” who maintain peace by adhering to an established set of rules. This is a not a series built around the standard seasonal arc with linking subplots; rather, its engine is fueled by vivid diverse personalities, and the intimacy with which they connect to one another and to the viewer.

The size of “Orange’s” ensemble demands that approach. Netflix lists 19 actors in the main cast on its season four informational press release—19 stories the writers must service so we can better relate to what these women are doing and where they’re going. That number doesn’t include the names of a number of familiar faces and key new players.

As such, fans flip through each season as if it’s a beloved album of family photos, savoring each character’s life developments as if they’re slideshows. If you think about it, that’s the typical concept of how doing time works: in one-day, one-hour, one-minute frames.

When “Orange” began, series creator Jenji Kohan used Piper Chapman (Taylor Schilling) to guide us through Litchfield by bungling her way through every interaction. A WASPy graduate of Smith, Piper soon learned to exploit her crisp elocution and prim manners to wheedle special treatment out of correctional officers like the pathetic, misogynistic Sam Healy (Michael Harney) or Joe Caputo (Nick Sandow), who were partly charmed by her ladylike presentation, and partly just wanted to bang her.

Piper was never more interesting than the characters who surrounded her; the fact that they orbited her like bees circle a flower was an uncomfortable flaw in those opening episodes.

But Kohan and her writers have been gently sidelining Schilling’s character since the end of season one. In this fourth season, as much as Piper still wants to believe she’s the center of Litchfield’s universe – “I’m gangsta. Like, with an ‘A’ at the end,” she hilariously informs a fellow inmate in the premiere -- her white girl problems are blessedly less central to the tale than they’ve ever been.

Yet it’s Piper’s egomania and greed that sparks a significantly detrimental transformation in Litchfield’s heretofore friendly ecosystem. If you didn’t hate her before, you just might now.

“Orange Is the New Black” has always been an ensemble dramedy, but this season’s grimmer tone allows the writers to definitively feature the other actors more prominently, beyond simply servicing the audience favorites like Taystee (Danielle Brooks), Dayanara (Dascha Polanco), Crazy Eyes and Poussey with expository flashbacks.

As the inmates desperately searched for something to believe in last season, Caputo was frantically doing what he could to prevent the prison from shutting down. To save it, he facilitated its privatization, and the company that took over, MCC, proved itself to be more concerned about the bottom line than caring for the prison population. Litchfield’s seasoned guards were the company’s first casualties.

MCC’s reaction to a hate crime committed against transgender prisoner Sophia Burset (Laverne Cox) heralded this new way of handling problems: It placed her in solitary, one of the worst fates a prisoner can endure. In this corporate culture, it’s easier to disappear an issue than to solve it.

Worse developments arise immediately. A new cadre of guards from the max, led by the uncompromising Desi Piscatella (Brad William Henke), created a charged, tense atmosphere. Soon after, MCC hires several armed forces veterans who take advantage of lax managerial oversight to dehumanize and degrade the women for their entertainment.

Immune from all of this is Litchfield’s celebrity inmate, lifestyle maven Judy King (Blair Brown). Corporate’s concern over keeping her safe and comfortable grants her special perks that grow increasingly ridiculous.

Fortunately Judy is so beloved, famous and rich that the other inmates are content to even get a glimpse or an audience with her; celebrity is still something of an inoculant against woe here. The only person who doesn’t swoon at her feet is Red (Kate Mulgrew), once the prison’s top matriarch and now dethroned by MCC’s invasion.

This new “upstairs/downstairs” dynamic spurs another a power shift: there are now far more Latino prisoners than black or white, and with more hardcore prisoners joining Litchfield, the place’s overall sense of caring for one other decreases with each passing day.

Other series have touched upon discussions of white privilege and the Black Lives Matter movement; in season four we see these concepts play out in real time as the new guards institute invasive, exploitative practices that break down Litchfield’s fabric.

Caputo and the less seasoned guards, then, are caught between this clash of the new order and the old ways. Caputo has long been obsessed with being a good guy, and he wants to leave a legacy of doing right by the women and men in his care. Problem is, toeing the company line wins him more perks like company travel and fine suits. As he cares less, he grows careless.

Thus the fourth season also becomes an interesting study in the destructiveness that corporate hegemony inflicts upon a flawed- if-relatively stable community.

Interestingly, this season of “Orange” also brings the clashes roiling the outside world -- conversations about race, class and economic inequality -- inside the prison walls. When a maltreated underclass has had enough, and its collective rage boils over, chaos is sure to follow…and on its heels, tragedy.

How effectively “Orange Is the New Black” explores these conversations is questionable, and mining this territory comes at the cost of developing the stories in which we’ve become invested. Perhaps due to the sheer size of the cast, the smaller stories within the larger conflicts receive less focus, and few of the newer characters, particularly a trio of white supremacists, are written thinly as tissue.

But these new episodes also prove there’s room for evolution in this series, particularly demonstrated by Pennsatucky (Taryn Manning)’s efforts to process an assault endured last season and her attempts to adopt a measure of self-respect.

It would be easier for “Orange is the New Black” to time hump its ways back to that first season, when many viewers were a bit more naïve about the prison system, and the myriad ways that human beings are treated as both chattel and cattle. Doing so, however, would make the show feel less brave and special.

Though this season ends on a darker, uncertain note that could make sentimental viewers wish we could all return to that sunny lake where anything seemed possible, there’s no question that Litchfield, and the show itself, still retains a measure of magic.