The AR-15 has to go: Sorry, Jon Stokes, but your toy isn't more important than people's lives

How is it that defenses of the AR-15, from enthusiasts and the NRA, end up reading like reasons to ban the gun? 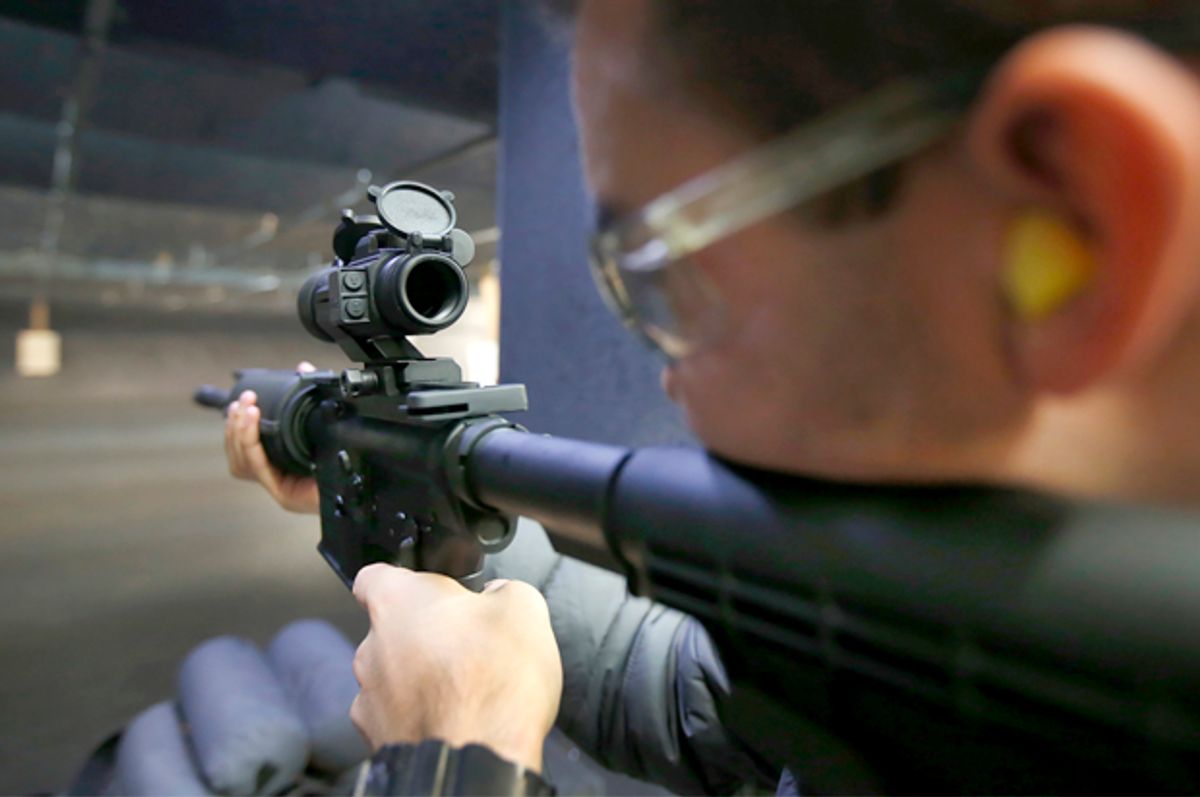 Meet Jon Stokes: Former editor at Wired, founder of Ars Technica, and a man who really, really loves his AR-15. It's a gun he hastens to explain is "technically a Sig Sauer MCX," in case you were worried that his piece at Medium defending his beloved weapon would be anything but a tone-deaf temper tantrum by a man who appears to love things more than people.

It's a little unclear why Stokes felt this week, of all weeks was the proper time to write his engorged tribute to his favorite toy. I realize that he really wants the world to know that his precious is imbued with awesome stopping power, but the grim fact of the matter is that the news cycle this week has done more to show off the dazzling kill abilities of the AR-15 than anything Stokes could write. If you are in doubt, here is a point-by-point comparison.

"This is all part of the reason why I, a civilian, 'need' a military-grade combat weapon," Stokes explains. "I don’t want to shoot and miss; I don’t want the gun to jam because it’s dirty or cold; and I don’t want to hit my target and then have it run off into the woods and die lost and wounded because I didn’t 'bring enough gun'."

“I look over, and he shoots the girl next to me,” Angel Colon, who barely survived the attack, told reporters. "And I’m just there laying down, and I’m thinking: ‘I’m next. I’m dead.’ So I don’t know how, but by the glory of God, he shoots toward my head but it hits my hand, and then he shoots me again and it hits the side of my hip. I had no reaction. I was just prepared to just stay there, laying down so he won’t know that I’m alive.”

"So cops and civilians 'need' an AR-15 because that one gun can be adapted to an infinite variety of sporting, hunting, and use-of-force scenarios by an amateur with a few simple tools," Stokes waxes on, dazzled by how cool his toy is. "An AR-15 owner doesn’t have to buy and maintain a separate gun for each application, nor does she need a professional gunsmith to make modifications and customizations. In this respect, the AR-15 is basically a giant lego kit for grownups."

From The New York Times description of Omar Mateen's application of the "giant lego kit for grownups" over this weekend:

Then the gunman was in the bathroom. He laughed.

“I just hear one solid gunshot, and you see the boy, just completely, you saw the life leave him.”

He started shooting at the stall. Two shots pierced Mr. Casiano. Another cut down a young woman who had been standing next to him. People begged him to stop, to spare them, trying to assure him they hadn’t seen his face. He reached his gun over the stall wall and shot into the cluster of people.

As the screaming died down, people slumped to the floor. Some were playing dead. Others were not playing.

"To return to the Sig MCX that was used in Orlando, the 'AR-15ness' of this gun is debatable — it takes many of the same accessories as an AR, and it fits on an AR lower, but unlike a normal AR it has a folding stock and a piston-driven operating system," Stokes explains, offended that you know-nothings don't understand the beauty and intricacy of his true love's form. "Because of this, the MCX is the perfect example of the degree to which the 'AR-15' is more of a loose collection of standards than a specific collection of parts. Its very existence is emblematic of the adaptability that’s a big part of the AR family’s appeal."

While the Orlando shooting victims did not probably pay much attention to the folding stock and piston-driven operating system, you can't say the Sig Sauer MCX (sorry, wouldn't want to offend the gun by calling it by the wrong name) failed to impress them.

“The people around me were getting shot. In my mind I kept thinking, ‘I’m going to get shot, but regardless of whether I get shot, I have to get out,’ ” she said.

McCoy ducked and ran, jumping over or moving past about 20 people who were lying on the floor of the club. She made it outside to the patio.

She wasn’t sure whether she had been shot but quickly realized she hadn’t. She saw that a man had been shot in the leg. She ripped off her top and used it as a tourniquet. A woman who had been shot in the arm was clearly in shock. McCoy applied pressure to the wound and told the woman that the bullet didn’t hit any organs. Phones were ringing and text message notifications were chiming from people trying to find friends or reassure loved ones that they were all right. Patrons tore down a wooden wall that enclosed the patio so that people could escape.

"It’s also the case that, contrary to what you saw in First Blood, adrenaline-fueled humans are hard to kill, even with a rifle," Stokes explains to the little-brains. "The more fast followup shots you can get on-target, the better your chances of scoring a hit that will stop the threat."

Stokes isn't wrong that the AR-15 or Sig Sauer or whatever he's wanking about sure is great at "scoring a hit" on "adrenaline-fueled humans" that might otherwise be "hard to kill". We all got evidence of that over the weekend.

As Naulings tried to lead them to a door down a small hallway, they got separated in the darkness and chaos as people rushed to find an exit.

"As I'm looking behind me and still moving, a girl gets shot right behind me, and she falls on the floor and people trample over her like she's nothing. Because they're so in a panic," Naulings explained.

Adrenaline-fueled humans, being, as Stokes notes, hard to kill, so many of them did escape. But only a third made it all the way out without being hit with bullets. One of those was Demetrice Naulings's friend, Eddie Justice, who died, despite Naulings's efforts to save him.

Stokes goes on and on and on in this vein, and even included a follow-up, which is even more outrage that people don't show enough respect for his favorite toy.  But you get the picture. He loves his semi-automatic assault rifle very much, not just despite its power to mow down a room full of people at a moment's notice, but quite clearly because of it. That is an awesome power and Stokes likes having it. As he notes, another "a few million other non-crazy Americans" also like it, though it is up for debate whether or not it's "crazy" to desire that kind of killing power so fiercely.

God knows the NRA is well aware that the customer base for these guns are people like Stokes, whose power fantasies overwhelm not just their common sense but sense of decorum and sensitivity.

In the days after the shooting, the NRA released a video highlighting the power of the AR-15 and encouraging people to buy one. The video doesn't even try to hide the fact that they're using the Orlando shooting as a marketing opportunity, suggesting the gun is ideal for self-defense against "terrorism."

But while the ostensible pitch is self-defense, it's also hard to escape the sense that they marketing pitch is building on the fact that the nation just got a full eyeball of what the AR-15 is capable of doing: Mowing down dozens of people in the space of minutes.

After all, they know full well that their customer base is people like Stokes, who doesn't even really bother to hide that he includes "mass shooting capabilities" in  his assessment of what makes this gun so cool.

"The rifle’s popularity is almost certainly the main reason why mass shooters increasingly reach for it when they go on a rampage," Stokes writes. "Think about it: if you’re planning to shoot up a room full of people, are you going to reach for a rare, exotic weapon that you have little experience with, or will you select the familiar option that’s easy to train with and that you have plenty of practice time behind? The answer, for anybody who shoots, is the latter."

It speaks volumes about how all sense of reason has escaped the pro-gun lobby that they think that "capable of destroying a room full of people in minutes" is a defense of a gun, instead of an obvious reason why the damn thing should be banned immediately.