"Rough and raw and strange": The Felice Brothers on their new album, Dylan comparisons and making "a very modest living" at music

Salon speaks to James Felice about the upstate NY band's ragged and exciting new album, "Life in the Dark" 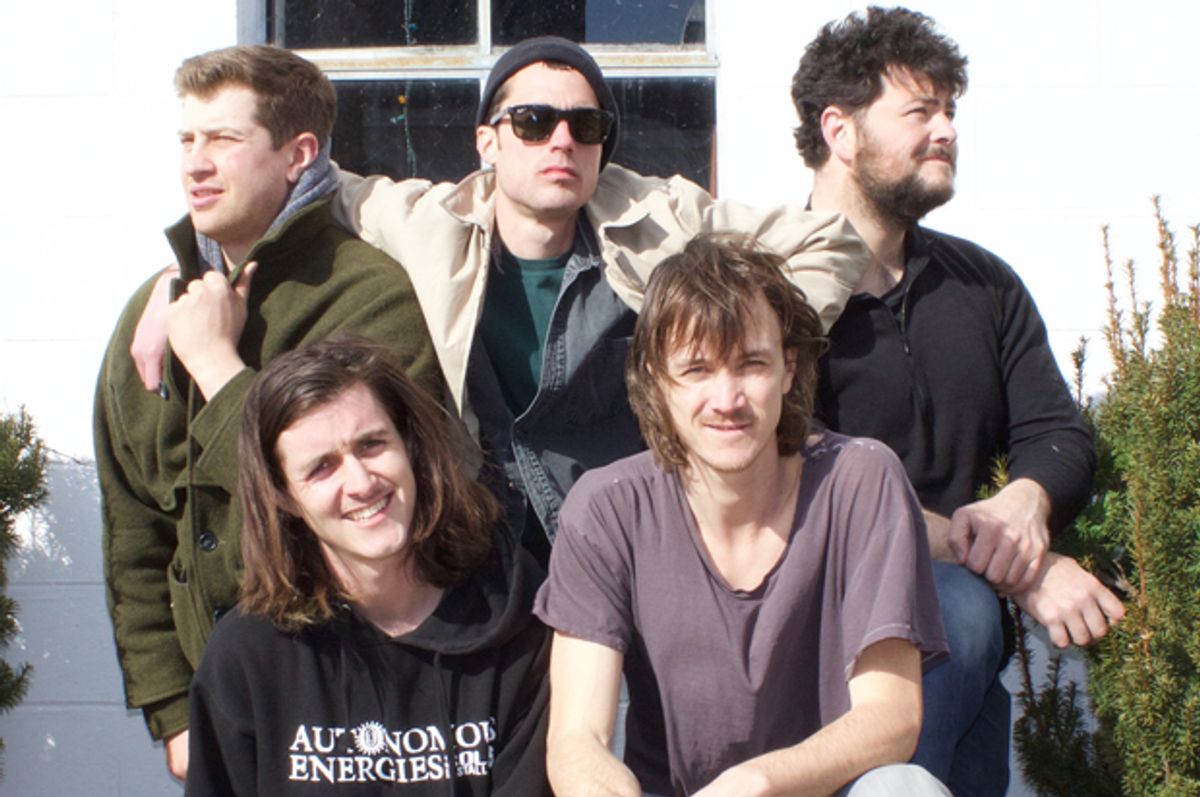 There are a lot of bands playing acoustic guitars and oddball folk instruments these days, but few of them make music as consistently memorable and varied as The Felice Brothers do. Raised in the Catskill Mountains, not far from where Bob Dylan recovered from his motorcycle crash and recorded “The Basement Tapes,” the group moved to New York, where they busked in the subway and developed an urban temperament.

The band’s records have been consistently strong, and their new one, “Life in the Dark,” which Yep Roc releases next Friday, keeps the quality high: Opening with the raucous, accordion-driven “Aerosol Ball,” it includes a hooky number called “Plunder” and closes with the melancholy “Sell the House.” Somehow, the group seems perfectly at home with each style: They never seem to be faking it.

We spoke to James Felice – who handles much of the musical side of the band and plays accordion and piano – from his home near the Hudson River in Kingston, New York. The interview has been lightly edited for clarity.

Let’s talk about the record first: Part of what strikes me is that the album is loose, a little off-balance, a little scruffy. Is that something you try for, or something you don’t try for that just happens?

I think it’s the result of the way we recorded this record, which was very quickly, with no budget, by ourselves. We were listening back to what we recorded when we first started – we weren’t sure whether we were making an album or demos; we just threw up some mics – and we loved it. We loved that it was rough and raw and strange and ragged. We knew that the songs were so good that it didn’t really matter – we could have cleaned it up and brought it to a real studio. But we thought what we were doing in that room had something to it.

You did this in a barn or something?

In a garage. Some friends of ours own a farm, and there’s a garage bay, so we did it in there.

Either everything benefits, or everything loses out when the accordion's on. Some of it was out of necessity: I was recording the band the same time we were playing live, and sometimes I had a piano that was farther from the computer than I needed to be when I needed to hit play and stuff. So I played the accordion instead.

The band is known as being rustic and folky, but I think punk rock has been an inspiration as well. Was that an inspiration at the beginning, or did it show up later? Does it still matter to you guys?

I think so – I think from the beginning we saw ourselves, at least at the beginning, as more punk than folk. Punk rock with more acoustic instruments. But we grew up listening to a lot of folk music – I listened to more folk growing up.

I don’t know what our aesthetic was. We didn’t know what we were doing, and we didn’t care. We just wanted to play music no matter what. So that’s what we did. I think that’s punk in a way, for sure.

From the beginning – and it’s true again of the new record – you’ve been compared to The Band and Dylan’s “Basement Tapes.” I know it drove you crazy for a while – does it still?

I think we’re over it! It must be true if it’s been 10 years and people are still saying it. I remember when we made our first record, and were compared to The Band, I had never even heard The Band’s records! So I was surprised. But then we started listening to The Band’s records and said, “Yeah, these guys do sound a lot like us!”

I mean, I still haven’t listened to “The Basement Tapes” all the way through. I just never got around to it. But I love The Band, I love those musicians – they recorded music in the same place where we grew up. I have a lot of respect for those guys.

So it doesn’t drive me crazy anymore. I think for a while it did. No one wants to be compared to anything. Everyone wants to think they’re the first person to do anything. But you realize after a while that that’s just not the case.

I feel like we’re off on our own; because we live out in the middle of nowhere, we don’t interact too much with anyone else. We’ve played shows with Dawes and Rawlings and all those guys, here and there. But we live in upstate New York – we’re pretty isolated. On a musical level, I guess we’re all cut from the same cloth, one way or the other.

I know at least some of the guys in the band are interested in American history. Does the recent political craziness remind you of any other historical eras? Does it interest you?

It’s definitely interested me – I’ve become fully entranced by the whole thing. Since right before the primaries started, I became really interested in politics. Who’s that crazy populist lunatic from Louisiana – Huey Long? I’ve read about him.

You can look at Donald Trump and see all kinds of terrible reflections in him, or the worst part of our past and of Europe’s past.

Does the extremism in the race seem funny to you, or scary, or some mix of both?

At first it was funny – I was very entertained by the entire Republican primary race. It was hilarious. Trump was the worst of them by far – and when he won, it was funny for a minute. But now it’s definitely becoming concerning. And I become infuriated when I hear him speak… It hurts my head. I was just thinking about this this morning – it makes me mad to think about him.

He does have a funny delivery, doesn’t he? He speaks in a few words at a time, repeats the same few words – “It’s gonna be beautiful! Wonderful! Great!”

His vocabulary is minuscule, what he says is idiotic… I know more about history than he does – and I don’t know that much. It drives me bonkers. The elevated language of an Obama is such an interesting thing. I have a lot of respect for educated people: I’m not really one, I never really went to college. But I love reading well-written political thought. I love reading Teddy Roosevelt, his speeches, Lincoln, all those guys.

To actually read what Trump says – it’s mind boggling, it’s childish and inane the way he comes across… I don’t like the guy, I gotta say.

Let’s close with music. Some musicians this week have complained about YouTube and streaming. Your band goes back about a decade, so you started recording post-Napster, in a period where record stores were disappearing and album sales falling off. What kind of impact has the Web had on you? Do you ever wish you’d been in a band in an earlier era?

I do sometimes wish that people bought our records. It was a more lucrative profession to be in.

I don’t know if we would be a band if there was no such thing as the Internet, because we basically needed it to get started – to spread the word. I remember when we had MySpace. We’d spend hours – we would sneak into this computer lab at the college we lived next to, and we would friend people on MySpace, or like them, or something, for the Felice Brothers page. We’d go to Ryan Adams’ page, and like-minded artists', for hours: We got a lot of fans that way. And booking shows, communicating with other people, and getting our music out there was because of the Internet.

But we don’t really make any money selling music. There’s five adult men in the band, and we make a very modest living. We still make a living, which is awesome, but we don’t make any money from selling CDs – we make all of our money from touring, and the occasional getting a song on a TV show sorta thing.

So the Internet helped you establish yourself, but made it harder, in some ways, to keep going.

I think it’s allowed a lot more bands to get out there, but not quite as many seem to be thriving. It’s nice to imagine being in the ’70s again.