Words matter: Trump's taking a dangerous path with his demonization of Muslims and other groups 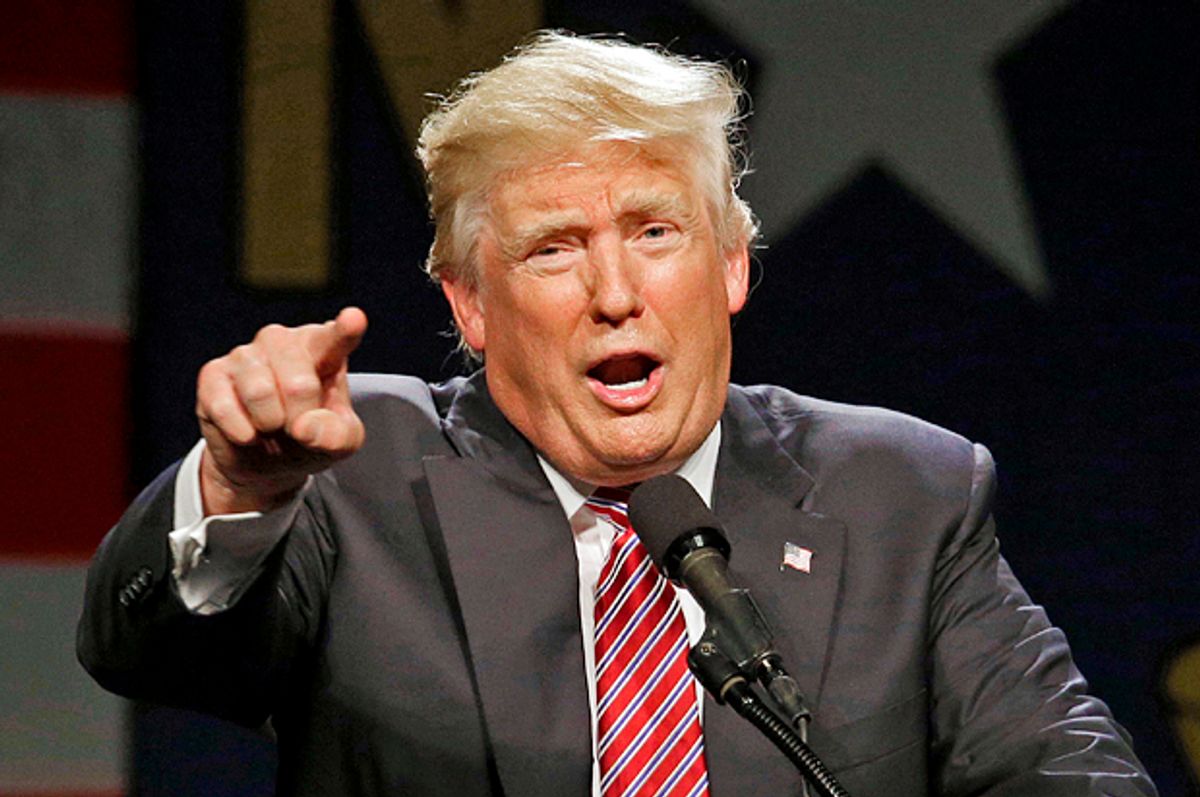 Shortly after last weekend’s tragic mass shooting at the Pulse dance club in Orlando by a homophobic Islamic terrorist, Donald Trump, the presumptive GOP nominee, quickly doubled down on rhetoric that had prompted numerous commentators to call the billionaire demagogue a fascist earlier this year. Even though the terrorist, Omar Mateen, was an American citizen born in New York, Trump once again called for a ban on Muslims entering the country, while fear-mongering about refugees and the screening process in a rambling speech full of blatant and egregious lies.

As I noted on Tuesday, Trump’s irrational and impulsive response to the shooting will only help the Islamic extremists who practice a form of theocratic fascism themselves — by alienating the world’s 1.6 billion Muslims, the majority of whom strongly reject violence and terrorism. Like the Islamic State, Trump accepts and promotes the “clash of civilizations” narrative, and he is playing right into the terrorist organization’s hands.

Trump (and Republicans) seem determined to learn absolutely nothing from the latest attack, not least the need for common sense gun control measures that would help prevent someone like Omar Mateen from buying guns — particularly assault weapons that serve only one purpose: to kill.

Instead, Trump is peddling the same asinine policies that he has been touting over the past year; policies that have a strong emotional appeal, but are widely rejected as absurd and foolish by most experts. Throughout his campaign, Trump has frequently submitted plans that were obviously thought up on the spur-of-the-moment, usually in response to a major news event. The most notorious knee-jerk policy was his aforementioned Muslims ban, which the billionaire thought up shortly after the San Bernardino shooting. After slightly backtracking on this plan last month and claiming it was just a “suggestion,” the billionaire is now aggressively promoting it again and congratulating himself after Orlando.

Trump’s impulsive need to put forward a major plan of action whenever something happens in the news, without any due consideration for whether the policy is legal or constitutional or even practical (indeed, Trump seems unable to consider whether one of his brilliant ideas would actually exacerbate problems) brings to mind what the late novelist and professor Umberto Eco called the “cult of action for action’s sake” in his 1995 essay “Ur-Fascism.”

In this frenzied mindset, critical “thinking is a form of emasculation,” while action is “beautiful in itself,” and “must be taken before, or without, any previous reflection.” Naturally, “distrust of the intellectual world has always been a symptom of Ur-Fascism.”

In the same essay, Eco goes on to list various properties (14 in total) of Ur-Fascism (or “Eternal Fascism”), many of which correspond with the Trump campaign and the “alt-right” movement that has formed around it. While Eco notes that different fascist movements do not share every feature, they do share a “family resemblance,” a concept first popularized by Ludwig Wittgenstein. The novelist defines eternal fascism as a “fuzzy totalitarianism, a collage of different philosophical and political ideas, a beehive of contradictions” (it is almost as if he were describing Trump’s politics).

The most apparent themes of the Trump campaign have been nationalism, xenophobia, the scapegoating of religious minorities (i.e. Muslims), the rejection of diversity, and the anti-intellectual backlash against the “politically correct” liberal elite, which tends to mean experts (e.g. climate scientists), professionals, and academics. Above all, any kind of cultural differences or political disagreements are seen as treasonous or “un-American,” which arises from what Eco calls the “fear of difference.”

“In modern culture the scientific community praises disagreement as a way to improve knowledge. For Ur-Fascism, disagreement is treason,” he writes. “Besides, disagreement is a sign of diversity. Ur-Fascism grows up and seeks for consensus by exploiting and exacerbating the natural fear of difference. The first appeal of a fascist or prematurely fascist movement is an appeal against the intruders. Thus Ur-Fascism is racist by definition.”

The intruders and enemies are everywhere in Trump’s paranoid worldview. The “criminal” and “rapist” Mexicans are stealing American jobs, the world’s 1.6 billion Muslims are resolute on killing Americans and infidels, the foreigners (e.g. Chinese) are laughing at us and ripping us off in trade deals. In the Trumpian perspective, every single problem that America faces can be explained by some insidious outsiders who are determined to humiliate America’s proud heritage and history of “winning.” Which leads us to another feature of Ur-Fascism: social frustration.

“One of the most typical features of the historical fascism was the appeal to a frustrated middle class, a class suffering from an economic crisis or feelings of political humiliation, and frightened by the pressure of lower social groups.”

Sadly, many members of the white working (and middle) class have been particularly susceptible to Trump’s demagoguery, especially if they are straight males (according to a recent Bloomberg poll, a whopping 63 percent of women say they could never vote for Trump). While it’s true that a great deal of these people have been negatively impacted by globalization, and have valid grievances when it comes to trade deals like NAFTA and the TPP, the Trumpist rage seems to be motivated more by accelerating equality for women, people of color, and the LGBT community, as well as the diminishing privilege that white males have long had in society.

“The only ones who can provide an identity to the nation are its enemies. Thus at the root of the Ur-Fascist psychology there is the obsession with a plot, possibly an international one. The followers must feel besieged. The easiest way to solve the plot is the appeal to xenophobia. But the plot must also come from the inside: Jews are usually the best target because they have the advantage of being at the same time inside and outside.”

For Donald and his legions, it is the Muslims, Mexicans and Chinese who are cunningly plotting against us on a global scale.

Fascism is ultimately more of a pathology than an ideology, engendered by destructive passions, fueled by resentment, bitterness and fear. The Trump movement has revitalized a dormant impulse in American politics, one that is as prone to paranoia as it is to violence and bigotry. And while it seems unlikely that Trump will win in November, the neo-fascist movement that he has breathed new life into is just as unlikely to go away after 2016.