AUDIO: “It’s unbelievable that you would welcome them and wish them a ‘blessed Ramadan.’ Are you sick?" 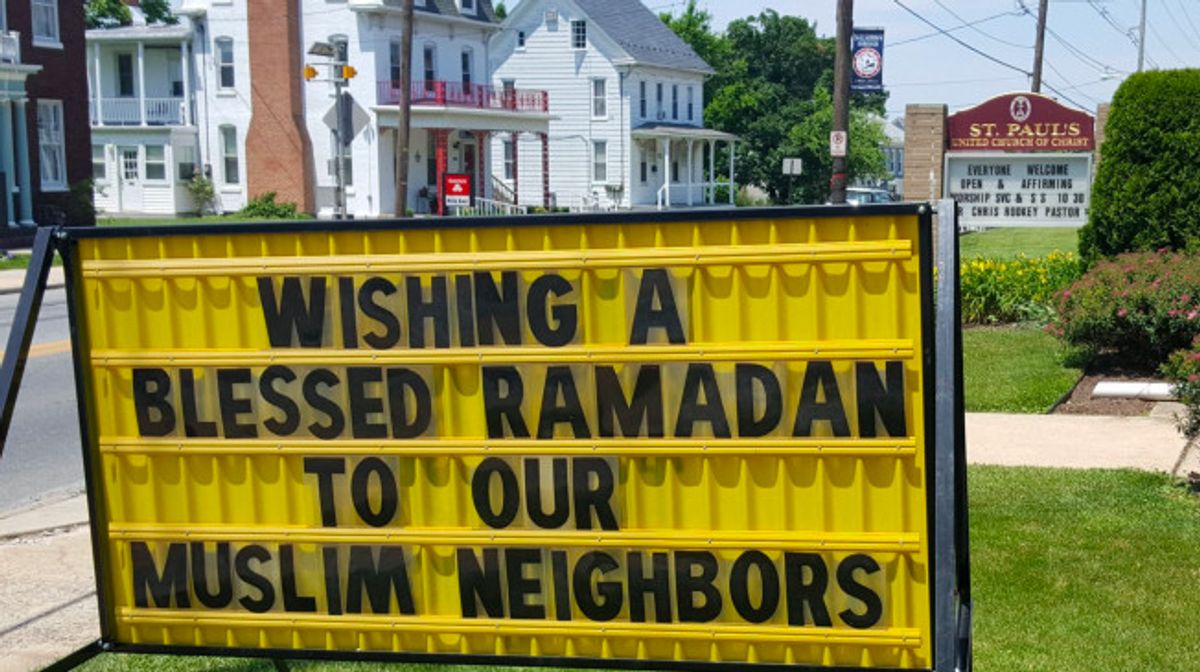 The pastor of a small church in Pennsylvania was attacked by a Donald Trump delegate to the Republican convention who was incensed by a sign "wishing a blessed Ramadan to our Muslim neighbors."

Rev. Christopher Rodkey's of St. Paul's United Church of Christ received a threatening voicemail over the weekend from a Trump delegate who berated the pastor for daring to speak positively about what he described as a “godless” and “pagan” religion.

"Pastor, I got your telephone number off the church's voicemail," Matthew Jansen, Trump delegate and Spring Grove Area district board member, began in one of at least two voicemails he left the Dallastown pastor over the weekend.

“It’s unbelievable that you would welcome them and wish them a ‘blessed Ramadan.’ Are you sick? Is there something wrong with you?” Jansen asked the pastor in a yelling rant, calling the sign "despicable."

Jansen made good on his threat, posting a picture of the St. Paul's Church sign as well as the phone number to the church on Twitter:

While it doesn't look like Jansen's call to arms has reached Coulter (yet), his followers have reportedly continued to harass the church throughout the weekend.

After the church's pastor identified the source of the original threatening call (Jansen did not leave his name or contact information in the first voicemail), he went public. The pastor published the recording of Jansen's berating voicemail, contacted the Spring Grove Area School District and wrote an op-ed for the local paper reaffirming his solidarity with the Muslim community:

At first, I thought, ironically, he is spreading the message of tolerance. But then the phone started ringing. I had to disconnect the phone and answering machine at church. As I write this, five days later, we’re still getting calls.

Yes, Mr. Jansen had encouraged people to harass a local congregation for speaking words of tolerance.

A look into Mr. Jansen’s Twitter account is helpful in terms of context; the profanity can’t really be shared in the newspaper. Muslims, here called “Mohammedeans” pejoratively, are “invaders” and “need to be arrested and deported NOW!”  The “damned” Muslims are pedophiles, terrorists and welfare-grabbing “parasites.”  Trivial and flippant concern about “race baiting” and women’s rights. Empty — I assume — threats to riot at the RNC convention. Same-sex parents are “disgusting and wrong.”

From a school board member!

And this is just some of what’s been tweeted since June 1.

The cowardly and frightened message, veiled as belligerent alpha-male baiting left on my phone’s voicemail, makes a whole lot of sense knowing the context from where it comes. His Twitter directly represents the very definition of islamophobia as a fear.

But what concerns me most is that this is who York County has selected to represent at the Republican National Convention. This is who a local school district has elected on a school board: someone who hates Muslims, despises gays and calls some parents “disgusting and wrong.”

"This isn't about me and him or the church and him. When I saw what was on his Twitter page, that's what alarmed me, and he continued to put things on there. That's between him and school board," Rev. Rodkey told the York Daily News. “This is a church that is interested in religious tolerance."

Still, Jansen continued to defend his harassment campaign in the face of public outing.

St. Paul's sign "was over the top as far, as I was concerned," Jansen told the York Daily News over the weekend, adding that he believed the message to be "blasphemous."

But by Monday morning, Jansen had posted a message on Twitter saying, "I do apologize for venting to the church. I was out of line."

Jansen, for his part, offered a pray to a Muslim organization: