The damage has been done: As Trump barrels toward defeat, he's dragging the GOP to the extreme right on race

If Trump is following in Goldwater's footsteps, he will lose the election, but win over Republicans ideologically 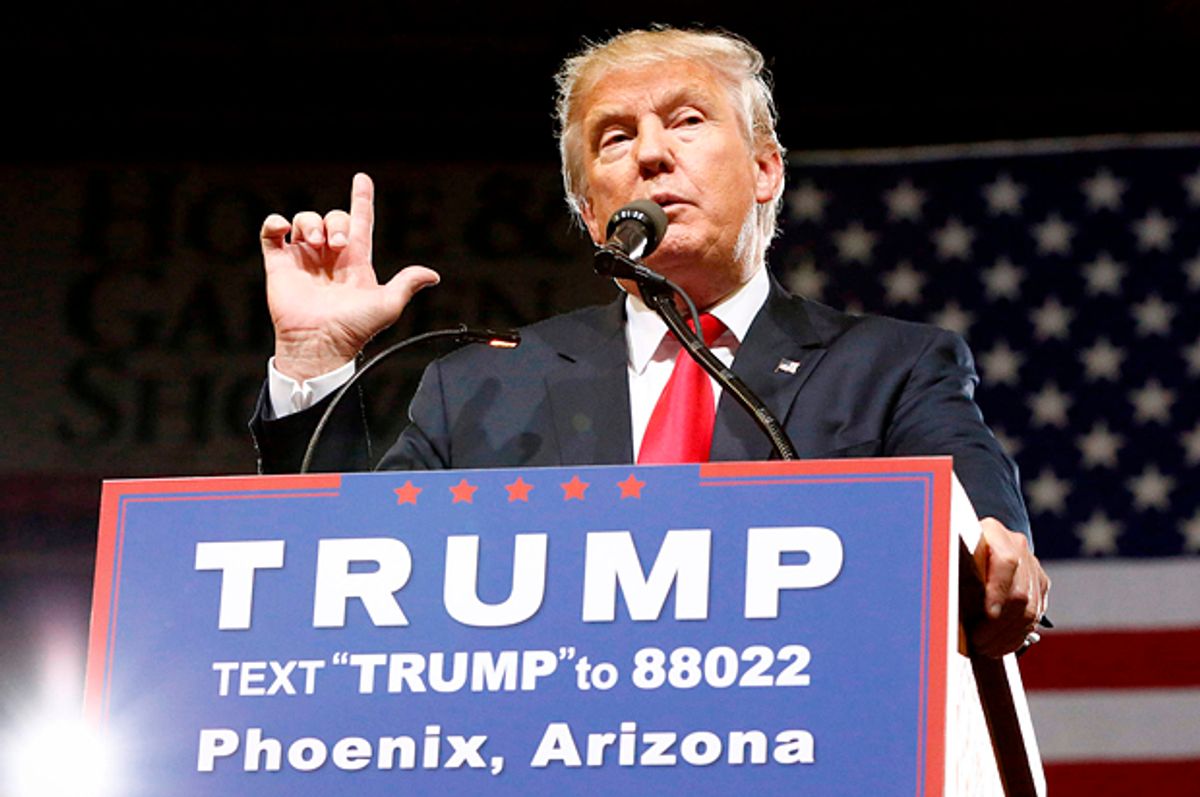 Barring some kind of miraculous turnaround, it appears that the Donald Trump campaign is not just a failure, but a bona fide catastrophe.

New FEC filings show that Hillary Clinton has over 30 times as much money as he does, a situation that is unlikely to change, as reports suggest Trump is unwilling to do the boring work of fundraising. The campaign fired Corey Lewandowski as campaign manager, the kind of high profile panic reaction that tends to dissuade would-be donors even more. His campaign has a staff of 70 people, compared to the 700 currently in Clinton's employ.

The Trump campaign is, as Jonathan Chait likes to call it, a garbage fire. More than that, there's indications that, like most Trump endeavors before it, it's a scam. Trump's M.O., as reporting on everything from Trump University to his casino investments shows, is to dazzle gullible people into giving him money with a bunch of lies, and then to take the money and run, leaving his victims holding the bag.

The same philosophy seems to be underpinning the Trump campaign. He has repeatedly told flat-out lies in order to trick would-be donors into thinking his campaign is healthy, such as claiming on May 29th that "my campaign has perhaps more cash than any campaign in the history of politics" and, even after the FEC report came out, swearing on Fox News that "I have a lot of cash." And, no surprise, he's redirected at least $6 million back to his own companies,

But even though Trump's campaign lands somewhere between a disaster and a grift, there is every reason to continue to worried about the dangers of the Trump campaign. No, not because he's going to win — that's increasingly hard to imagine, as he's well behind Clinton and has no real resources to catch up — but because he's laying down groundwork for future Republicans, who might be a lot more successful at using his campaign of white nationalist grievance.

We've seen this sort of thing before. In 1964, Barry Goldwater ran a campaign harnessing white grievance at desegregation. The campaign was famously a disaster, garnering less than 40 percent of the vote and only 52 electoral college votes. The obvious conclusion to make, at the time, would have been that racial resentment is a bad campaign strategy, something better left to the dustbin of history for Republicans who want to win future campaigns.

But what happened was that, instead of dumping the racial resentment angle, Republicans decided to go about it a different way. The plan was to keep the racism, but swaddle it in a thicker coat of plausible deniability. In 1968, what that meant, for Richard Nixon, was dropping more overt defenses of legal segregation and turning instead to more coded appeals to racism.

As Lee Atwater famously noted in a 1981 interview with political scientist Alexander Lamis:

You start out in 1954 by saying, “Nigger, nigger, nigger.” By 1968 you can’t say “nigger”—that hurts you, backfires. So you say stuff like, uh, forced busing, states’ rights, and all that stuff, and you’re getting so abstract. Now, you’re talking about cutting taxes, and all these things you’re talking about are totally economic things and a byproduct of them is, blacks get hurt worse than whites.… “We want to cut this,” is much more abstract than even the busing thing, uh, and a hell of a lot more abstract than “Nigger, nigger.”

Which is, of course, an apt description of how the Republican party went about things. Coding the racism in this way made it more socially palatable. Nixon's "law and order" campaign played on white fears of black violence, all without saying so directly and he was able to win in a landslide, even with George Wallace playing the spoiler and sucking votes away on the right. Ronald Reagan built on that strategy, using rhetoric about "welfare queens" and "states rights" to signal racial attitudes, all without being too overt about it.

There's no reason to think that this kind of thing can't happen in some form again. Yes, Trump will lose in November. But the fact that he got this far in the first place, beating out seasoned politicians in a primary, will matter. Trump managed to get the Republican presidential nomination with an incompetent staff, no real fundraising prowess, and a candidate who is so narcissistic that it makes other politicians look like the humble servants they always claim to be.

He did it with one simple trick: Being racist as all get-out, which clearly wins big with the Republican base. Other Republicans, watching this go down, may very well be wondering how far you could get if you took Trump's message, cleaned it up a bit, and put real organizational power behind it, instead of motley crew of hangers-on and your own children.

After all, that's exactly what Nixon and Reagan did: Take the more overt racism fueling the Goldwater campaign, pretty up the rhetoric a bit, and win big.

There's already indications that even as he's going to lose, Trump's rampage is tugging the Republicans rightward on the racism issue. Paul Ryan called Trump's rhetoric "textbook" racism, but then continued to support Trump anyway. Overt racism used to be a deal breaker, but no more, I guess.

You see this process with the Republican obsession with magic words, too. Sure, Republicans were accusing President Obama of being afraid to say "radical Islam" before Trump, but he took it to the next level, implying that it's because Obama is working for ISIS.

Now, most Republicans won't go there, but Trump has opened a door. Now the accusations that Obama is somehow concealing something by not using magic words have grown more serious, with Paul Ryan openly accusing Obama of trying to "downplay and distract from the threat of radical Islamist extremism." It's the same accusation as Trump's, that Obama is, for some dark reason, trying to hide the truth of the world. It's just prettied  up a little more, to sound a little less like a conspiracy theory, and therefore this talking point has more mainstream traction.

Now, there's good reason to believe that this strategy may not work as well as it did in the past. The country is more racially diverse than it used to be. About 40% of white people voted for Obama, and if those voters were open to voting for a black president, odds are most won't be interested in racist appeals, even if they are more coded than what Trump is offering.

But the fact remains that the Republican voting base sent a strong message to the party: They love racist appeals so much that they are willing to overlook the fact that they are coming from an orange-hued clown that is too lazy to do even the bare minimum to run a presidential campaign. The party will probably hear that and try to find a way to meet the base's desires, but in a way that's more elegant and professional than what Donald Trump is offering.