Lives are on the line: The smearing of LGBTs by the right is more than disturbing — it's dangerous 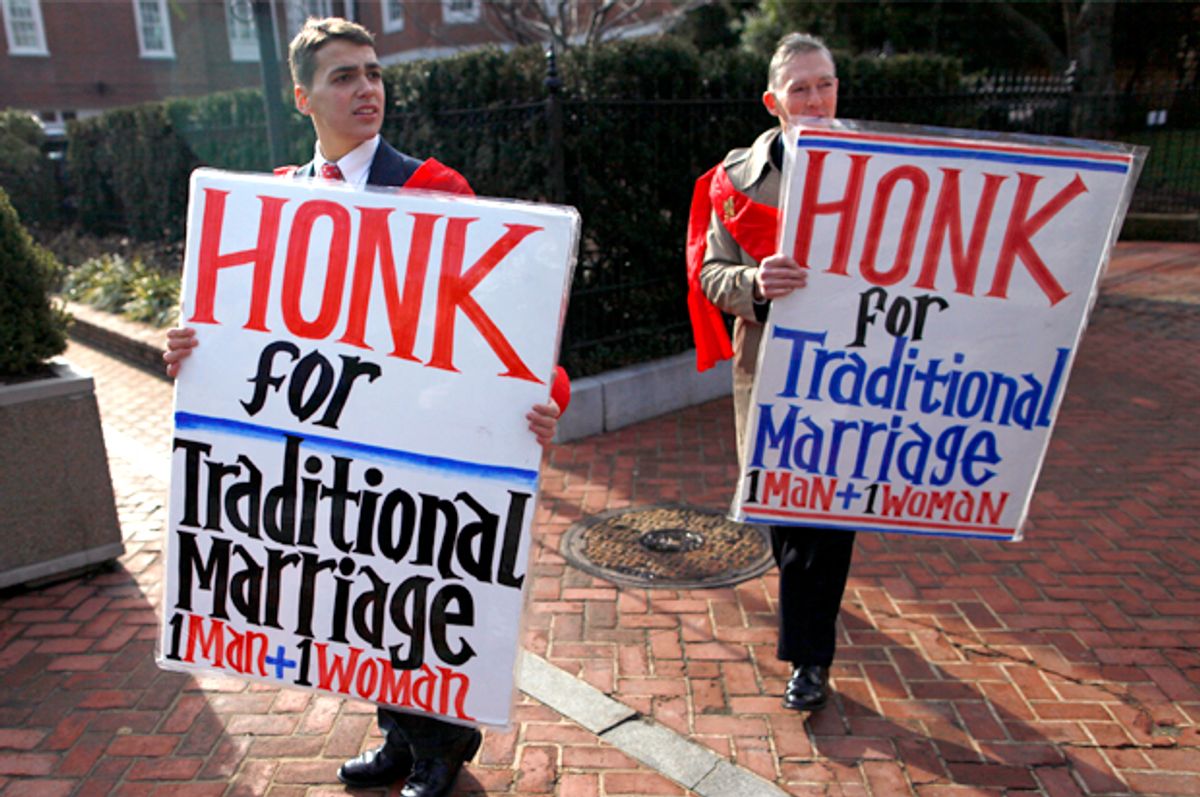 How ironic. The architect of North Carolina's anti-transgender "bathroom bill,” which took away the right of transgender people to use the restroom that matches their gender identity, compared LGBT rights activists with the Taliban. Just last week, the killer in the latest major attack on the LGBT community, which left 49 people dead in Orlando, Florida, may have proclaimed his allegiance to ISIS on calls with the police. Some have wondered if the killer used ISIS as a cover for a different motivation involving a possible struggle with his own sexual identity, but the massacre was terrorism against LGBT people, regardless of motive.

Emails obtained by the Charlotte Business Journal display the nasty views of North Carolina State Rep. Dan Bishop (R), the primary sponsor of the “bathroom bill.” In response to a constituent message telling him not to “cave in to the Politically Correct Taliban” and to coordinate “bathroom bills” with other states, Bishop replied, “I LOVE that idea. Taliban. Love that too. Not giving up. Ever.”

“As someone who grew up in Rep. Bishop’s district, it’s deeply disturbing to see such blatant animosity from someone who is supposed to represent all constituents in his district, including LGBTQ people,” said Matt Hirschy, Director of Advancement at Equality North Carolina, in a press release. “Based on these outrageous exchanges, it seems clear that pulling back the curtain on legislators' true intent will reveal the despicable nature and motivation of this legislation.”

North Carolina’s House Bill 2 also banned any local discrimination protections for LGBT people and revoked the ability of anyone to sue under state employment non-discrimination laws. And, just for fun, the GOP threw in a provision that prevents municipalities from raising the minimum wage, perhaps intended to soften the blow that businesses operating the state are feeling because of a bigoted law that discriminates against employees and customers.

Hundreds of businesses have come out against the bill, although many that did have given large political donations to conservative groups that helped elect some of the bill’s sponsors, many more who voted for it and the desperate governor who signed it, hoping to score points with his Republican base in his tough reelection bid this year. PayPal canceled plans to bring 400 jobs to Charlotte because of the hateful law.

But the North Carolina GOP has dug its heels in. Just this week, the state party hired anti-LGBT religious fanatic Kami Mueller, who comes from the main group lobbying for HB2, as its spokeswoman.

Bishop’s comments are nothing new among the anti-LGBT community. Bryan Fischer of the American Family Association, an anti-LGBT hate group according to Southern Poverty Law Center, also compared gay people to the Taliban, equating gay sex with domestic terrorism. “If open homosexuals are allowed into the United States military, the Taliban won't need to plant dirty needles to infect our soldiers with HIV,” he wrote. “Our own soldiers will take care of that for them.” Fischer, who was scheduled to join Ted Cruz at a Mississippi campaign rally until the Texas senator reportedly got sick and canceled the event, has also blamed gays for Adolf Hitler and the Holocaust.

Tony Perkins of the Family Research Council, which cheered the North Carolina law and is considered an anti-LGBT hate group by the Southern Poverty Law Center, has also compared LGBT right activists with terrorists. As support for the Defense of Marriage Act waned, Perkins said on his radio show that terrorism is “a strike against the general populace simply to spread fear and intimidation so that they can disrupt and destabilize the system of government. That's what the homosexuals are doing here to the legal system.”

Outspoken conservative blogger and radio host Erick Erickson compared LGBT rights activists with the Charlie Hebdo killers. In a 2015 radio program, he said, "One group [LGBT rights activists] destroys the livelihoods of those who dare to mock or dissent and the other [actual terrorists] took their lives, but both are doing it to drive debate from the public square..."

Former U.S. Senator and presidential candidate and lifelong bigot Rick Santorum was angry when the Massachusetts Supreme Court legalized same-sex marriage in 2004. “This is an issue just like 9/11,” he stated. “We didn't decide we wanted to fight the war on terrorism because we wanted to. It was brought to us.”

And we must not count out who funds the hate groups. For example, close Koch brothers ally and wealthy mega-donor Art Pope of North Carolina has backed LGBT hate groups including the Family Research Council and its North Carolina affiliate, the N.C. Family Policy Council, with almost $1.5 million since the late 1990s.

America may have finally enacted marriage equality, though it took far longer than it did many other comparable countries, but LGBT people are still under attack. Politicians, anti-LGBT activists and talking heads who continue spitting anti-LGBT bigotry have blood on their hands. They create a climate in which gay and trans people are constantly at risk. LGBT people are now the most likely to be subjected to hate crimes than those of any other group in America, with trans women of color in the most danger. Because of this same climate concocted by bigots, 41 percent of transgender and nonconforming people have attempted suicide.

The bigots are right: The world is full of terror. But LGBT people are its victims.