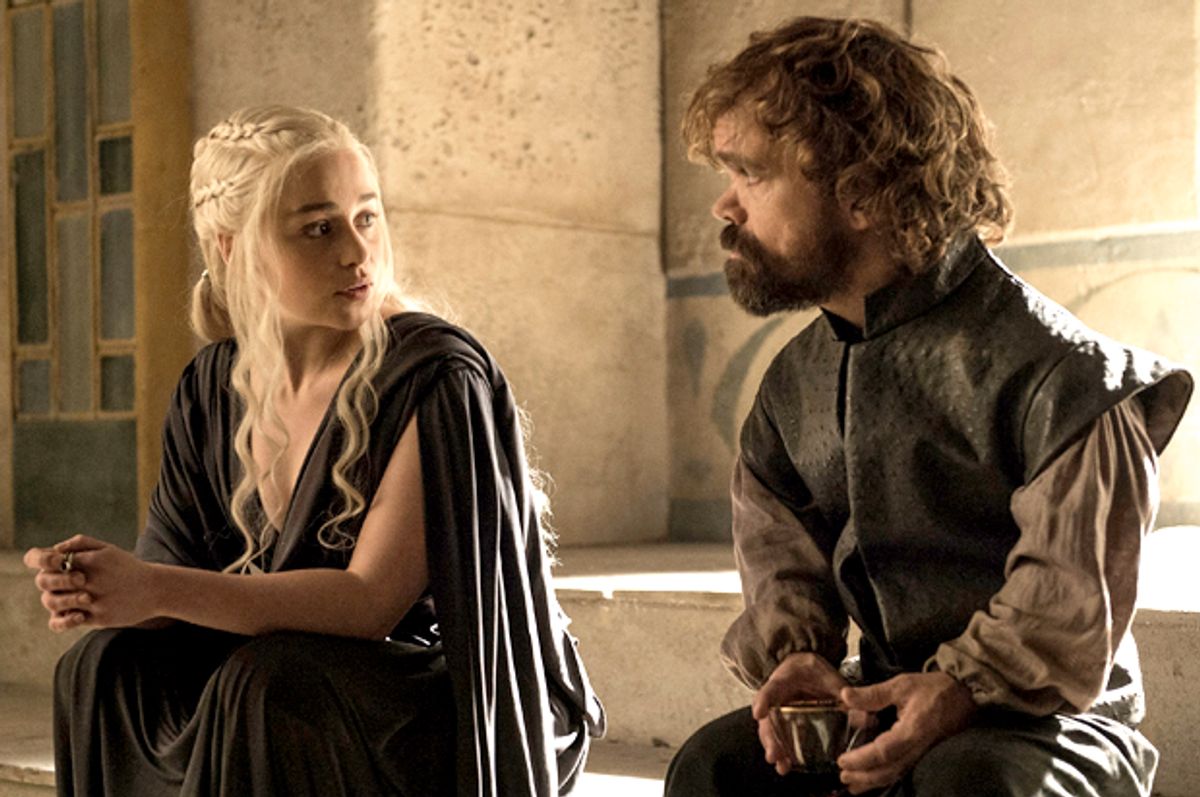 Emilia Clarke and Peter Dinklage in "Game of Thrones" (HBO)
--

Warning: Massive spoilers ahead for the season 6 finale.

One of the reasons that “Game of Thrones” has continued to move viewers—even when it savages our hearts—is that it so poignantly and, yes, often brutally, reflects certain fundamental truths about life, whether we’re traveling by horseback or waiting for our Uber to arrive: No matter how smart we are, how brave, loyal or loving, we are living under the shadow of the sword of Damocles; no matter how shrewd and deft we’ve been in playing the game, we will always be vulnerable, ever-exposed to the whims and desires of other people. These themes have been evident throughout the show’s six seasons—from the tragic gallantry of Ned Stark to the timid, deposed princess Daenerys learning that she can’t be burned; from Robb Stark’s doomed love for a woman who isn’t his bethrothed to Jon Snow’s unforeseen bond with the Wildling king—but they crystallized with a blinding clarity this season. Starting with the confluence of events that brought Davos and Melisandre to Castle Black to resurrect our newly-crowned King in the North, the only man who fully appreciates the menace of the White Walkers, and concluding with the eruption of wildfire that decimates one of Westeros’ oldest houses and puts a bitter-hearted woman on the Iron Throne.

The moments that begin Cersei’s ascension to the throne are virtuoso pieces of film-making. The episode opens with Cersei, Tommen, Margaery, and the High Sparrow donning the vestments of their power: jewelry, crown, and holy robes. These garments, and all that they signify, have become these characters’ identities—noblewoman, ruler, holy man—and these identities will lead to their downfalls. The silence and stillness instills a pervasive dread, heightened by the decision to use warped, discordant camera angles, creating sweeping aerial views that shrink and narrow as the High Sparrow steps in front of the penitent Loras Tyrell, who must recite a litany of his “sins” before renouncing his name, his claim to Highgarden, and his potential to father children (effectively ending the Tyrell name) in front of his father and sister.

It’s clear that he has been coached to repent by his sister Margaery—who has also, apparently, negotiated a deal for her brother’s life with the High Sparrow. “You mutilated him! That’s not what we agreed to,” she cries in rage as the Sparrows sink their blade into Loras’ forehead. There is a brilliant close-up of blood falling in little beads near Loras’ bare, dirty toe—for all of her cunning and resolve, this is the best that Margaery can do for her beloved sibling. I’ve written before about how Margaery is one of the most intelligent, resourceful characters on "Game of Thrones," and the show seems to acknowledge that in her final moments (Natalie Dormer’s line reading of “forget about the bloody gods!” feels both cathartic and funny). She is the only one who realizes that Cersei’s absence isn’t just the inflated brattishness of a pampered noblewoman but an honest-to-the-Seven-Gods portent of doom. She tries to help her wounded brother to the door, begs and yells for everyone to get out, now—but it’s too late. An explosion of green heat rips through the sept, incinerating everyone. Until Chekov’s wildfire was unleashed, Margaery maneuvered through a life-and-death struggle with zealots as best she could; her plans would have ensured her and Loras’ survival, at the very least. Sadly, her cleverness, formidable as it was, was still no armor against Cersei’s blazing rage.

Cersei claims her vengeance, firebombing all of the Sparrows (and taking out the “younger, more beautiful queen” who she believed would replace her), waterboarding the Septa with wine and enjoying a “Breaking Bad” moment of reverse confession before she leaves the Mountain to torture her, and taking the power that her cold, patrician father and battering lout of a husband would have never allowed her, but it carries a terrible cost when her last surviving child, Tommen, takes a calm step out of a high window. Earlier this season, her brother Jaime extolled Cersei’s ferocity as a mother; and Cersei herself once told Sansa Stark that children could give purpose to even the saddest, bleakest life—and now even though Cersei has emerged victorious, she is without her children (and, based on Jaime’s look of deep consternation during her coronation, without him as well).

All that careful plotting and that iron will still can’t overcome the power of prophecy—Tommen’s death fulfills one key part of Maggy the Frog’s prediction that all of Cersei’s children will die before her; and Daenerys Targaryen, whose armies of Unsullied, Dothraki, and Ironborn (not to mention three large dragons) are sailing toward Westeros, seems like the real “younger, more beautiful” queen who will make Cersei’s rule a very short one. Which raises the question of that last part of the prophecy, the “little brother” who will, in the end, murder her. Jaime would still be the most dramatically satisfying choice—his hands around her white throat would be an immaculate pathos; however, it could just as easily be Tyrion, the exiled Lannister who, through happenstance and cunning ended up as the Hand of the Queen for the Mother of Dragons. Tyrion’s scenes with Dany offer a bit of respite from the breathless intensity of this episode: There’s a wry, lived-in quality to the way that Emilia Clarke and Peter Dinklage play off of each other: His laconic energy as the sarcastic strategist who “drinks and knows things” perfectly balances her nascent demagoguery.

Tyrion tells his queen that he has come to believe in nothing, except for her. And this concept of belief—in gods, in ways of life, in family names, and above all, in people—has been a powerful through-line throughout the season. Jon Snow remembers Stark family affairs in far happier times: The true-born sitting at the front table, and him, cared-for, yes, but a bastard nonetheless, sitting at the back. So it is a genuinely moving moment—and a genuine movement forward for both characters—when Sansa tells him that, even though she is the Lady of Winterfell, he is still a Stark, “at least to me.” And when Ser Davos confronts Melisandre for sacrificing Shireen, she claims she did so at the behest of her god, the same god who resurrected Jon and (with the perfect timing of the Knights of the Vale) helped him win Winterfell, leaving Jon with a crucial decision: Act as Ned would and uphold the law of the land, or let a child murderer sit on his council because she can, as she promises, use her magic to help him in the war to come.

All of Jon’s military training, and everything he learned at the knee of his father-figure, Ned Stark, still can’t prepare him for a decision of that magnitude—and he will have to make more of these life-altering, potentially life-ending decisions as the new King in the North. The scene in which all of the lords of the North raise their swords to Jon, hailing him as their king, essentially legitimizing him as a Stark, moved me to tears—it’s one of the rare scenes in the entirety of the series in which a good thing happens to a good character. However, it only happens because Lyanna, pixie firebrand of House Mormont, stood up for the cause of Northern unity with a passion and vigor that managed to move the other houses (houses that, as she points out, would not ally with Jon’s call to war, even though they suffered intensely under Ramsay’s rule)—and because Sansa Stark does not petition to be named Queen in the North, a title she clearly wants, but is leery of, thanks to Littlefinger’s nudging her to claim it.

The rise of the Starks this season has moved the arc of justice forward—it has happened as the other old houses of Westeros have turned to ash (Cersei may be queen, but she and her siblings are the last Lannisters); and it has brought an end to the rampant cruelty of House Bolton. Perhaps this is why the Red Wedding has been mentioned so frequently, and so overtly—as a reminder that the Starks’ re-emergence is truly miraculous, given the breadth and depth of the machinations against them. The deaths of the Boltons and Arya’s sadistic revenge-killings of Walder Frey and sons have provided a feeling of, if not finality (nothing like the Red Wedding could ever be forgotten), then at least closure to the Starks’ greatest ache. Arya isn’t content with simply slitting Walder Frey’s veiny old throat—she wants him to know that she is a Stark, and that the last thing he will see as he dies, is the smiling face of his victims’ kin.

So, beyond Queen Cersei, first of her name, and the Night’s King, who is the great threat in the great game now? The sight of Dany’s fleet advancing on Westeros in undoubtedly spectacular—and in the battle of the despots, I’d toss my lot in with a dragon queen over a lioness any day—but it does present a fresh threat to Westerosi characters we actually love, like the Starks. This makes the episode’s big reveal (a reveal that is, I suspect, even more precious to book readers) that Jon Snow is the son of Lyanna Stark and Rhaegar Targaryen, even more significant as we head into season seven (and, lamentably, the series’ final stretch of episodes). The story of Jon’s true parentage only underscores the power of the arbitrary, the ways in which forces beyond reason or control determine not only the course of any one person’s life, but also the lives of an entire realm. The union of Lyanna and Rhaegar started the first war, and the fragility of the peace forged after that war lead to—well, everything we’ve seen on the show. As Lyanna whispers her famous plea to Ned (“promise me”) I can’t help but marvel at the scope of suffering caused by a handsome young prince’s first besotted glance a lovely young maiden. Then the camera closes in on the dark-eyed baby’s slightly befuddled little face, and that face slowly segues into a man’s face, scarred and hardened; and that man, the orphaned child of a doomed love, may be the greatest champion against the greatest evil that Westeros has ever known.