Not keeping the faith: Donald Trump and the conning of evangelical voters

It's politics, not religion: Dobson and other religious leaders have successfully cleansed Trump of his sins 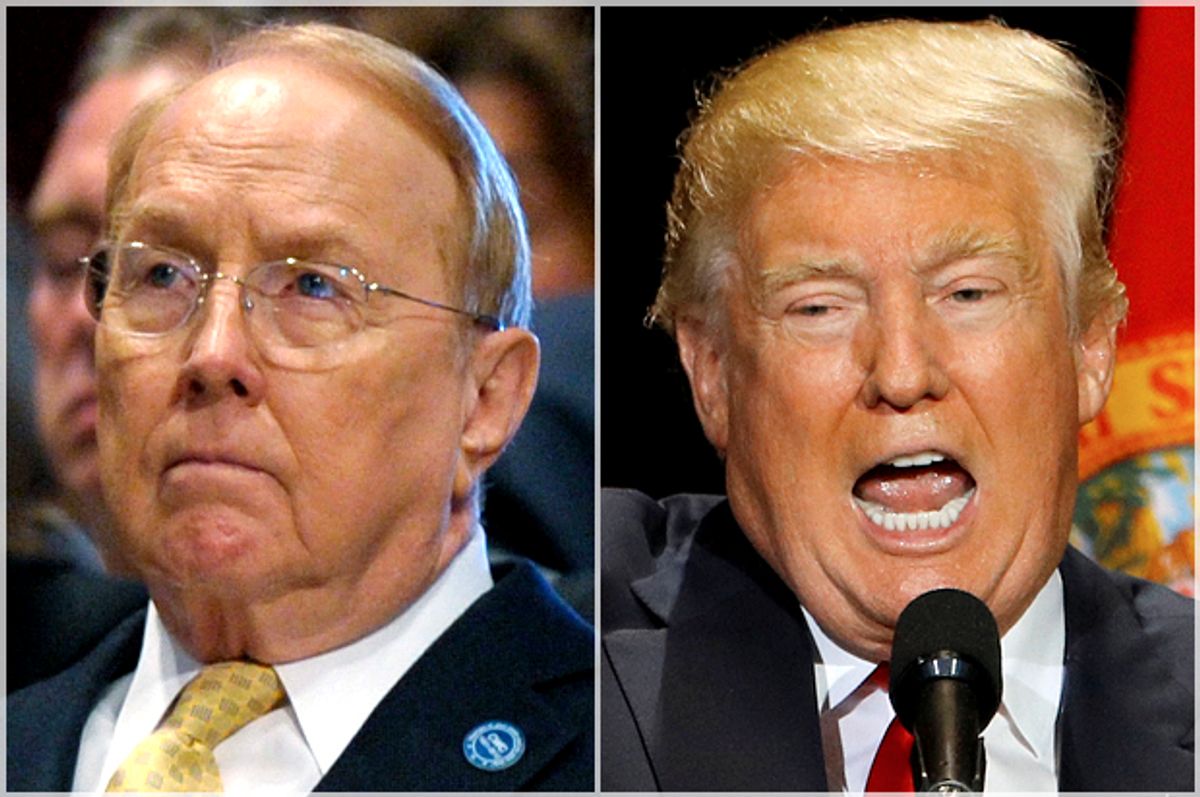 I’ve written quite a bit about Donald Trump’s unexpectedly successful wooing of the religious right in this presidential campaign. After all, we’ve been told for more than three decades now that conservative Christians require that America’s political leaders have the highest personal moral standards and adhere to a strict commitment to traditional values so he wasn’t expected to do well with them. Recall the stirring words of Focus on the Family’s James Dobson back in 1998 during the impeachment scandal:

As it turns out, character DOES matter. You can’t run a family, let alone a country, without it. How foolish to believe that a person who lacks honesty and moral integrity is qualified to lead a nation and the world! Nevertheless, our people continue to say that the President is doing a good job even if they don’t respect him personally. Those two positions are fundamentally incompatible. In the Book of James the question is posed, “Can both fresh water and salt water flow from the same spring” (James 3:11 NIV). The answer is no…

We are facing a profound moral crisis — not only because one man has disgraced us — but because our people no longer recognize the nature of evil. And when a nation reaches that state of depravity — judgment is a certainty.

There was Ralph Reed, formerly of the Christian Coalition and current leader of the Faith and Family:

''Character matters, and the American people are hungry for that message. We care about the conduct of our leaders, and we will not rest until we have leaders of good moral character.”

It’s fair to say that Donald Trump misses the mark on these requirements by a thousand miles.  With his three marriages, his history of public bragging about his sexual exploits and the size of his penis in the national media, and his obvious lack of even rudimentary knowledge of the Bible or any religious teachings, Christian or otherwise, he would seem to be the last person that people of strong faith would find acceptable.

But in the primaries, it became clear that he was drawing many of the voters Ted Cruz had counted on being in his corner. It’s not that Cruz didn’t get evangelical voters, it’s that he was only getting the ones who actually attended church. As it turns out this allegedly vast faction of hardcore conservative Christian true believers wasn’t nearly as big as everyone had been led to believe. Indeed, it turns out that for a lot of people “evangelical” is itself just another cultural signifier like those boots and those pork rinds, a tribal designation rather than a serious adherence to Christian teachings.

That’s not to say that this particular group of self-identified evangelicals don’t believe in anything. They undoubtedly go to church from time to time and think of themselves as Christians. It’s just that they don’t actually live their lives in accordance to the Bible as Christian Right leaders have spent years indoctrinating the public to believe. They’re conservatives the way Donald Trump is conservative --- authoritarian, intolerant and often cruel.They identify with The Donald because of his willingness to “tell it like it is” as they see it and personal morality is irrelevant.

This opinion piece in the New York Times by J.D. Vance explores just how unfortunate that decoupling with the actual church and its teachings has been for many members of the white working class who are so enamored of Trump and his “anti-PC” campaign. He discusses various studies that show kids who attend church regularly “perform better in school, divorce less as adults and commit fewer crimes.” And they are, on the whole, less prejudiced, exposed as they often are to people of other races and shown empathy and generosity by church leaders’ willingness to help people in need. Evangelicals who don’t actually go to church have lost an important stabilizing, social influence.

And he may have hit upon an important reason why this has happened — “the deinstitutionalization of the faith has occurred alongside its politicization.” He says this is one reason why some of these people may be relating to Trump despite the fact that they have very little in common:

While it’s hard to fault people for voting their conscience, this fusion of religion and politics necessarily forces people to look externally. The sometimes tough love of the Christian faith of my childhood demanded a certain amount of self-reflection and, occasionally, self-criticism. While faith need not be monolithic — it can motivate both voting behavior and character development — focus matters. A Christianity constantly looking for political answers to moral and spiritual problems gives believers an excuse to blame other people when they should be looking in the mirror.

But then the Christian Right has long been a political operation rather than a religious movement, hasn’t it?

This brings us to Trump’s most recent “outreach” to the religious right which took place last week in New York when Trump met with a large group of Christian leaders to set their minds at ease about his candidacy. The big news that came out of that was that Trump bizarrely stated that nobody knows if Hillary Clinton has any religious beliefs at all. (They do, of course. She’s a devout Methodist.) But he also sold himself as someone who would protect “religious liberty”---  the latest social conservative buzzword --- with his Supreme Court picks which seemed to thrill the assembled church leaders. Some were so excited by this they lost their bearings a little bit. Cortney O’Brien of Townhall interviewed one of the participants:

Pastor Michael Anthony, who is president of the company Godfactor and founder of the National Week of Repentance, says he witnessed a much different Donald Trump at Tuesday’s evangelical meeting in Times Square...“His posture said it all,” Anthony explained. “He sat the whole time and had his hands to his side for the majority of time. I saw a gentler demeanor here...There was a palpable humility in the room that gets me kind of emotional to talk about it. It was really unique.”

It ended, he said, with the entire room on their knees praying for revival for the country.

“In a very calm, quiet way, with his arms folded, he said, ‘you religious leaders,’ he called us, ‘have every right to speak up and express yourselves, and you don’t. The First Amendment protects that right and yet you don’t.’” Anthony said the room knew he was spot-on. “I think God was speaking through him at that moment, to the church, to tell us why are you being silent about the most important thing about your lives?”

Yes, he actually said that God was speaking through Donald Trump.

At the end of the meeting, Trump released a long list of religious right leaders as his “Evangelical advisory committee” including Richard Land of the Southern Baptist Convention, a man who has been scathing in his criticism of Trump. (He torturously explained that he would agree to serve Hillary Clinton too because that’s what Jesus would do.)

Ralph Reed has been a political operative since the 80s when he and anti-tax zealot Grover Norquist and convicted K-Street  felon Jack Abramoff were junior Reagan revolutionaries together so he knows the game. And this was the best he could come up with:

Number one, I know his children. And you don't raise children who are this phenomenal if you're a person of bad moral character. Secondly, you don't accomplish what he has accomplished in New York City and around the world by not judging people on the content of their character rather than the color of their skin.

But he’s all in with Trump. And James Dobson, who wrote that righteous screed about people no longer recognizing the face of evil back in 1998, spoke with the aforementioned Michael Anthony on the radio and casually asserted that Trump has recently been born again:

Dobson: There are a lot of people ministering to him (Trump) personally…He did accept a relationship with Christ. I know the person who led him to Christ. And that’s fairly recent. I don’t know when it was, but it has not been long. I believe he really made a commitment, but he’s a baby Christian.”

That’s very convenient since it means Trump gets a do-over on all that awful behavior of his.

Not everyone is buying it. This evangelical scholar suggests that the real believing evangelicals are being played:

What happened on Tuesday in New York was the theo-political equivalent of money laundering.  Dobson and his gang are making Trump clean so that he is worthy of evangelical votes.

So, all those white working class types who identify as evangelical but don’t go to church are being seduced by Trump’s crude nationalism and nativism, largely as result of religious leaders politicizing religion and turning it into a vehicle for their own secular power. Now, after years of lectures about morality and personal rectitude in public life,  they’ve sunk so low that they’re actually trying to convince the truly devout weekly church goers that this depraved demagogue is someone they should support.

These people are making the spineless establishment Republicans look like saints by comparison.