The purity of driven work: Bill Cunningham, model for a committed creative life 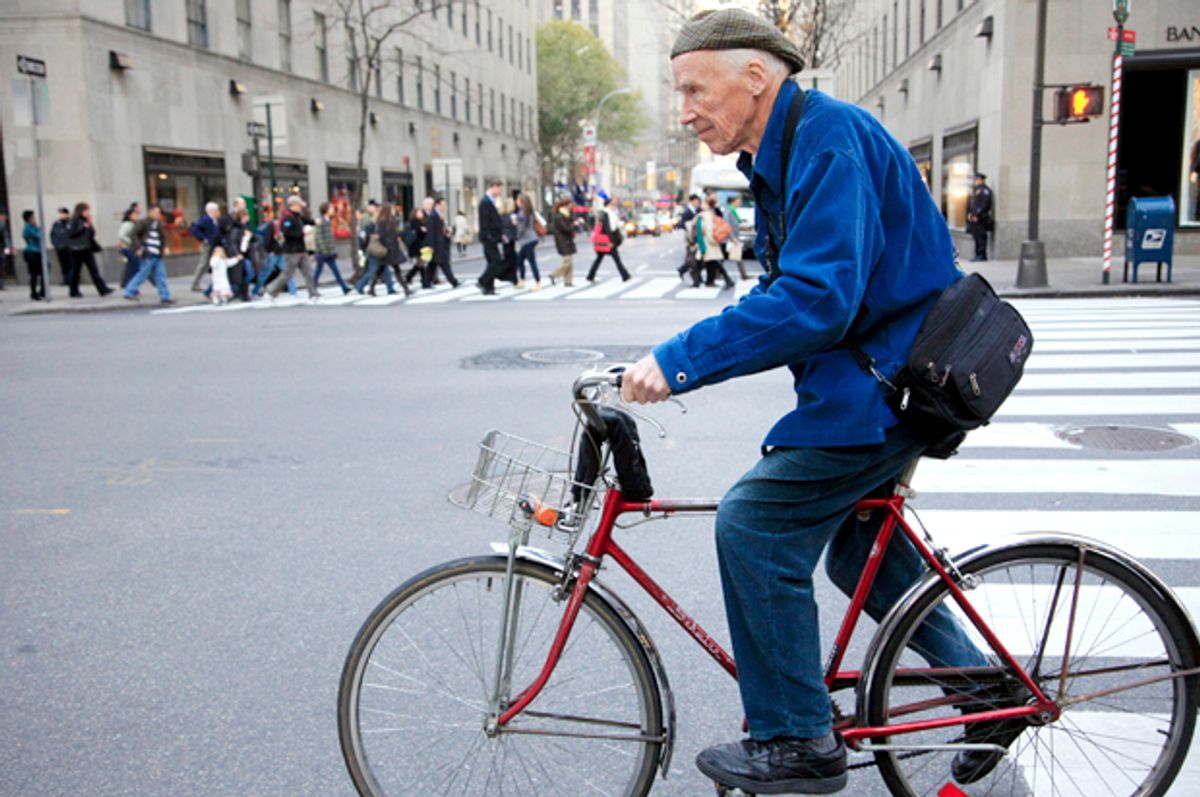 A good friend of mine wears a fedora. He does so without irony, jaunting the hat on his head for runs to the bodega or gambols through the used record shop or sits on the sofa with a book. The fedora is his most enduring sartorial affectation. He is somewhat of a Bohemian, and he was at his most Bohemian several years ago when he lived in New York City. Blond, giraffe-limbed, laser-eyed, my friend is a poet, a painter, a photographer, and I can’t help thinking all that artistic energy must’ve been emanating from him when Bill Cunningham took his picture.

I’m not sure if my friend was wearing the fedora when the legendary New York Times photographer caught him on camera, though I like to think he was. Cunningham, who died yesterday at the age of 87, was a master of sighting the stories daily, out-and-about style told. In a short video about his method, Cunningham said, “I let the street speak to me …You’ve got to stay out there and see what it is.”

“Stay out there and see what it is” might be a perfect epitaph for the man behind the Times’ columns On the Street and Evening Hours. A Harvard dropout who came to New York for a job in advertising, Cunningham’s almost biological response to the aesthetics of clothing led him to open a millinery shop (William J) and work in fashion journalism before he started taking pictures in 1966, what he dubbed “the real beginning” in a 2002 recollection of his life.

That recollection is worth reading and Richard Press’s 2010 documentary "Bill Cunningham New York" is worth watching even if you’re not a fashion blogger (bow down) or a stylista, a New Yorker by zip code or a nascent journalist looking to take a page from Cunningham’s vulgate of decency. His singular eye aside, what makes the photographer a compelling character is not just the subject of his work but his unflagging commitment to it. The way Cunningham lived—industriously, ascetically, single-mindedly—gives us, the people he photographed, something to which we might aspire.

What makes driven, productive people so fascinating? They become for us poles of creative and artistic commitment. They inspire us. They are enviable and brilliant, responsible and ethical. There’s something pure and animal about the resolute, the dedicated. The desire to make and make, to do and do is akin to a long squirreling away of nuts for the inevitable winter.

And yet the worker—no matter how beautiful the work nor how beloved the pursuit—can be antisocial or hermetic, a cousin to the obsessive doomed by repetition-compulsion to march on (in ugly, broad strokes, Freud’s notions of the death drive). A hoarder, a compiler, or as Cunningham self-identified, “a record keeper,” “a collector.”

The glint of madness in the mirror we hold up to compulsive workers’ methods is part of their appeal. The industrious are on their own course, often one to which we ourselves may have aspired. In his review of "Bill Cunningham New York," the himself-prolific Roger Ebert wrote, “Ever since reading Thoreau's Walden, I have been teased by the notion of leading a life with only the bare essentials and peacefulness. I lacked the nerve to find that little cottage and plant those rows of beans. Bill Cunningham lives a life as pure and idealistic as Thoreau's, and he does it in the middle of Manhattan.”

Like any good film, Bill Cunningham’s life—as depicted in Press’s documentary, as memorialized by friends and subjects and colleagues and fan—seemed comprised largely of training scenes. Add to Rocky pounding the Philadelphia pavement and Kevin McAllister booby-trapping his home with Micro Machines the octogenarian cycling about Manhattan, clad not in a gray sweat suit or a puffball cap but his iconic French blue jacket.

The process of preparing for a fight or practicing one’s craft or even doing what one loves rarely feels so heroic in real life as it looks on film, set to music and careening by on the wings of montage. The worker’s tools become signatures, metonyms. As Oscar de la Renta admitted of Cunningham: “I don’t know anything about his life, except his bicycle.”

The industrious fascinate us because of their penchant for distillation. Later in his review of Press’s film, Ebert wrote: “[Cunningham] has invented an occupation he does better than anyone else ever has, he has simplified his life until nothing interferes with that vocation.”

That simplification coupled with an indelible artistic and editorial output tinges the most mundane habits with glamour. We love the drudgery upon which the art, the pleasure, the passion is built: “To make money, I worked at a corner drugstore,” Cunningham wrote in his 2002 reflection. “At lunchtime, I’d stop making hats and run out and deliver lunches to people. At night, I worked as a counterman at Howard Johnson’s. Both jobs provided my meals, and the dimes and nickels of my tips paid for millinery supplies.”

Chores become routines become traits. We cherish Cunningham’s preferred diner breakfast (egg, sausage, cheese) and his utilization of a shared bathroom (“Who the hell wants a kitchen and a bathroom?” he says in the documentary); we admire his monkish slumber amidst filing cabinets of negatives; we revere his abstention from movies and TV for how they complete his character and cement his commitment to “[standing] for two hours without knowing whether somebody [is] coming out … the surprise of finding someone.” We like that “most of [his] pictures are never published”—not for the onslaught of those images—but for what that trove represents about its collector. Think of Prince keeping safe the code for his Paisley Park vault, where rumor suggests there’s enough music to release a new album once a year for the next century.

“I do everything, really, for myself,” wrote Cunningham in 2002. Perhaps what our fondness for productive, creative people like Cunningham and Prince most expresses is our desire to not only live but thrive on a self-determined code, Thoreau at Walden, an Emersonian state of self-reliance.

Perhaps Cunningham’s unwillingness to accept champagne at galas and his reluctance to join the staff of The Times (only for health insurance), like Prince’s close-grip on his catalogue, gives us a glimpse into the economy of lives governed by principles. Cunningham, the man who didn’t recognize Farrah Fawcett (“I never bothered with celebrities unless they were wearing something interesting”), wasn’t concerned with fame, but artistic freedom: “That’s why my files wouldn’t be of value to anyone.”

In his book, "On Writing: A Memoir of the Craft," Stephen King offers his own spin on the well-worn adage “write what you know.” “Write what you like,” says King, “then imbue it with life and make it unique by blending in your own personal knowledge of life, friendship, relationships, sex, and work. Especially work. People love to read about work. God knows why, but they do.”

I’m not sure it’s such a mystery. I believe we’ll continue to revere Cunningham and Prince and other people who die and leave behind not just legacies of work but of working for their lives’ power to model multifaceted, even competing, human ideals: beauty, creativity, responsibility, perseverance, independence, self-possession, integrity. Work ethic doesn’t involve perfect pitch or an eye for patterns. When we see people prospering, blissed-out by their duties, we can say: I want to be like them.

This week also brought the death of filmmaker Paul Cox. Cox’s films, like Cunningham’s photographs, focused not on labeling seismic trends but showing or seeing the value in the small ruptures in our interpersonal plots. In their obituary, The Times quoted an interview with Cox. The director and writer said, “I’m not a filmmaker out of ambition … It’s pure compulsion. I have no option.”

Passion for creation and passion for process are what make the labors of the worker appealing, and passion is what makes the worker’s end—when it comes—such a wallop. If the compulsive worker had the option, the worker wouldn’t quit. It is painful to think of Cunningham having to stop. After all, it was only the other day, in a recent On the Street titled Duality, that his love of fashion was as understatedly gushing, as personable and joyous and succinct as always: “Hey, I never saw it as good as this in the 1950s.”