Trump lashes out at Elizabeth Warren after she joins forces with Hillary Clinton: "I think she is a racist"

Scott Brown and the RNC have now challenged Elizabeth Warren to a DNA test: "We call her Pocahontas for a reason" 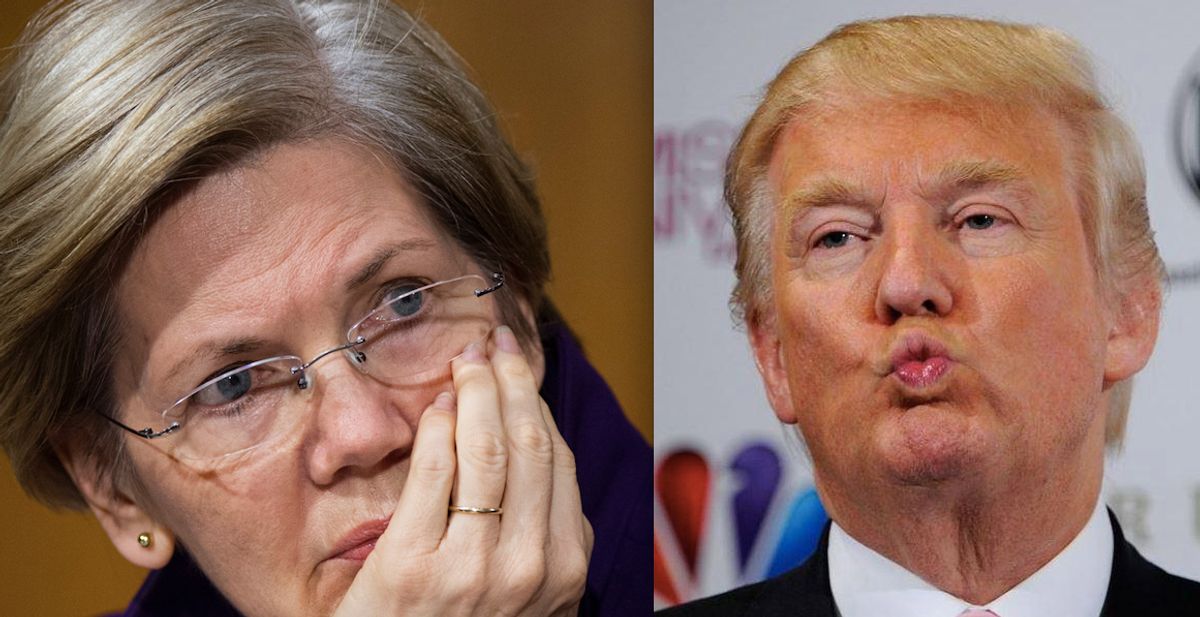 At a raucous rally in Cincinnati, Ohio, Monday, popular progressive Massachusetts Senator Elizabeth Warren laid to rest any doubts about her commitment to defeating Donald Trump after refusing to endorse Hillary Clinton during a protracted Democratic primary battle, forcefully and enthusiastically taking on the presumptive Republican nominee alongside his direct rival.

“Hillary has brains, she has guts, she has thick skin and steady hands, but most of all, she has a good heart. And that's what America needs!” Warren declared, with a beaming Clinton standing beside her in a matching blue pantsuit.

Repeating her riff against Trump that he is a “small, insecure, money grubber," Warren continued to assail the controversial candidate before eventually introducing Clinton.

"You know I could do this all day, but I won't," she half-jokingly insisted.

When Clinton took the mic, she smiled as she admitted that she indeed relishes in Warren's attacks getting under Trump's notorious thin-skin. And boy, has it ever?

Trump initially delivered a more subdued response to the Clinton-Warren tag team after sending out a preemptive attack on Twitter earlier in the day:

His official campaign statement titled "Sellout Warren" was released shortly after the campaign event ended and stayed away from name calling to hit Warren on the issues:

Warren is also campaigning for the author of the Trans-Pacific Partnership, a deal she has routinely slammed ... This is a trade deal that Clinton has expressed support for in over 45 public speeches. Warren’s campaigning for Clinton stands in stark contrast to the liberal ideals she once practiced.

But only moments later, Trump reportedly called NBC News reporter Hallie Jackson and personally unleashed on Warren, repeating his attacks on her claims of Native American heritage. (More on this particular line of attack here.)

"Elizabeth Warren is a total fraud. I know it," Trump told Jackson. "She made up her heritage, which I think is racist. I think she is a racist, actually because what she did was very racist."

"We call her Pocahontas for a reason," Trump insisted.

In a press call following Warren's appearance on the campaign trail Monday, Trump surrogate and former Massachusetts senator Scott Brown, who lost his seat to Warren, suggested she take a DNA test to put Trump's attacks on her heritage to rest: