Holocaust escape tunnel discovery a blow against deniers: "It was dug out by spoons. By people who were shackled around the ankles" 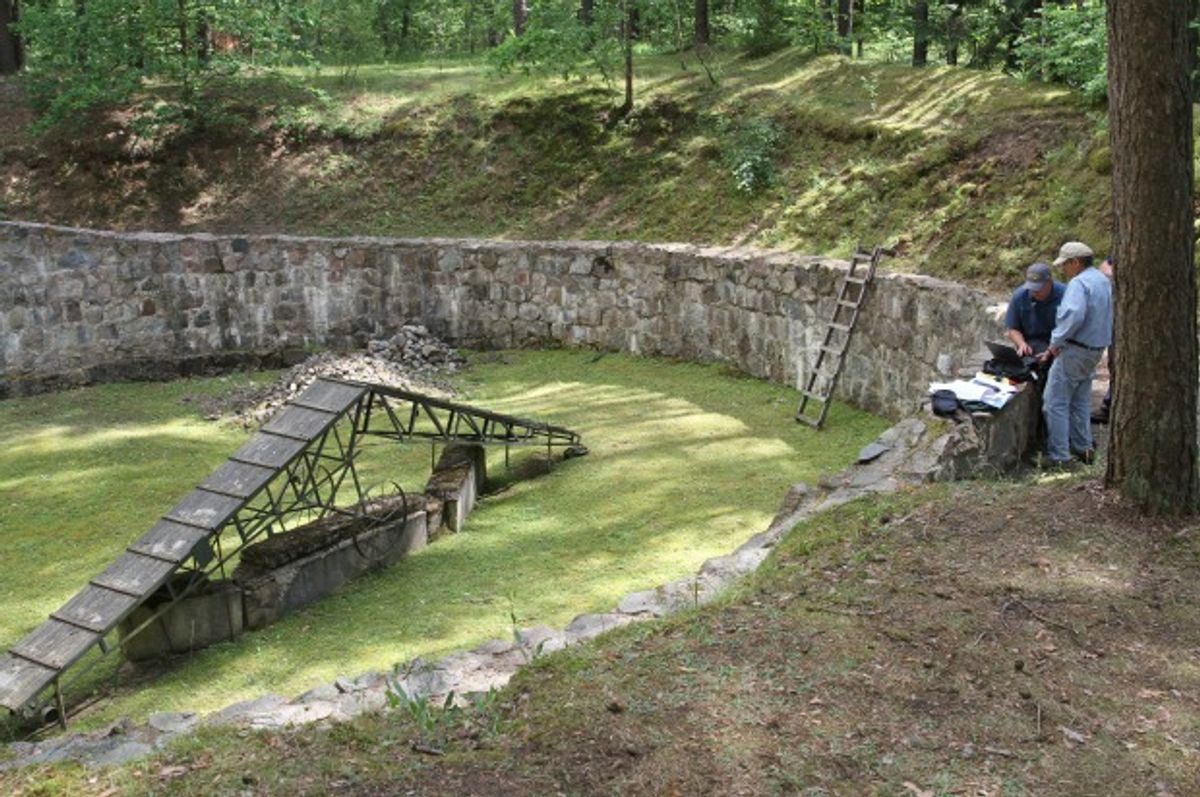 Dr. Richard Freund and Dr. Harry Jol at the lip of the WWII-era pit at Ponar. (Ezra Wolfinger/NOVA)
--

The awful story of the Nazi treatment of European Jews may be most awful in Lithuania, then a part of the Soviet Union in which 95 percent of the Jewish population was killed. But a recent discovery near the nation’s capital, Vilnius, offers a glimmer of something a bit brighter: a tunnel through which a handful of Jews, awaiting execution underground, were able to escape.

The tunnel’s exact location was only confirmed this month, as archeologists investigated near the place where 100,000 people, 70,000 of them Jewish, were killed by the Nazis and their Lithuanian collaborators.

The full story will be told through a NOVA documentary next year on PBS. For now, we spoke to Paula Apsell, a NOVA senior executive producer, at her office at Boston’s WGBH. The interview has been lightly edited for clarity.

So before this month, what did we know or suspect about this Lithuanian tunnel? Did we have hard evidence? Just rumors?

Eleven people actually escaped, and survived the war. We’re trying to hunt down their families, but we haven’t done it yet. But they told the story. Additionally, there was a team in 2004 that located the mouth of the tunnel, which they then for some reason left unmarked.

But as time passed, according to the archeologist Richard Freund, people were starting to say, “Well, maybe it never happened, maybe it was an exaggeration, maybe they tried to escape, and could never make it.” And you know what happens to memory, and with all the Holocaust denial… It fits into that category very well.

So there was a kind of uncertainty around it. It was a story, with an incomplete finding. The fact that this was found by ERT — electrical resistivity tomography — and then confirmed by another technique, GPR — ground penetrating radar…

Before we get into the technical issues, tell us a little about the tunnel — how it was made, what it looks like, how long it took to dig.

Well, it was dug out by spoons. By people who were shackled around the ankles. Which eventually, in order to escape through the forest, they filed off their shackles. I believe it was 100 feet, somewhere between five and nine feet below the surface. One hundred feet doesn’t sound that long, but when you remember that it had to be dug out by hand, and with spoons, which were the only instruments they had, it’s pretty amazing. I believe it took them 76 days to do it.

And you’ve seen the tunnel and the mouth of it yourself. What’s the setting like?

It’s a woods. If you didn’t know there were 100,000 bodies burned there, and buried there, you’d think it was a beautiful and peaceful park. Then you see these circles enclosed by walls. You’d think it was a great setting for family picnics. It’s only when you begin to realize it’s a graveyard…

Before the war, when the Russians controlled Lithuania, they thought this would be a good location for oil and gas exploration, so they dug these pits, and got them all ready to put oil and gas in. But that never happened. And when the Germans decided that they were going to kill all the Jews from Vilnius, plus 30,000 other people — homosexuals and dissidents and undesirables — they thought, “Oh, this is really convenient, what a place, we can store the bodies here.”

This was just the beginning of the Final Solution – they had concentration camps, but they didn’t have the kind of death-camp structure with gassing… The Germans ran this camp, but they had to go out and find Lithuanians to do the killing. They found 150 Lithuanians who were in a riflery alliance, and got them to do the killing, but they could only do 10 killings at one time. They weren’t set up to do the factory-style murder that they later did at Auschwitz and other concentration camps. It was a slow, torturous process. [Jews and others] would come in and be in these processing trenches – which you can see there – and then 10 by 10 by 10, they’d go to get shot. It took a long time to kill 100,000 people.

It’s kind of a horrible story wrapped around a triumphant story, or vice versa.

NOVA is a science series, and archeology is a science… But archeology is now being revolutionized with help of this technology. What it means to me, as a science journalist, is that while memories fade, we have hard evidence in the form [technology], data about exactly where the tunnel is. And that’s something you can never take away.

It presents irrefutable proof at a time where there is so much Holocaust denial, and survivors are dying out. That’s really important…. In 10 years when all the survivors are gone… Man’s inhumanity to man is always hard to fathom.

When I was there, walking around the ghetto in Vilna – that’s Yiddish for Vilnius… Jews made up 35 percent of the population of Vilna. This was a highly prosperous, highly cultured, vibrant society – just like we are. And I’m sure they didn’t have any idea this was coming. In a way it shakes your confidence about the future. It really haunted me when I walked around there.

How will NOVA tell the tale? And what kind of footage do you have?

We haven’t edited yet. But we deal with two sites. One site is the Great Synagogue, which is being excavated by the archeologists. They’ve found what they think are ritual baths… It was a community center.

Then they worked at Ponar, which were the pits, they found a twelfth pit where 7,000 to 10,000 people were buried and burned there, and you can see the ash.

The film will be on the archeological excavation, and on the history. One thing we will try to do is to recreate – take these haunted, empty streets and show how vibrant they were. They called it the Jerusalem of Europe. This wasn’t a dying community.

We’ll also be profiling the archeologists, Richard Freund and Jon Seligman, both of them had relatives in Lithuania. Jon Seligman lost an untold number of people. So this is a really personal mission for them. They are really invested in it, really emotional about it.

Piece by piece, through archeology, this place is being restored. That to me is really touching.