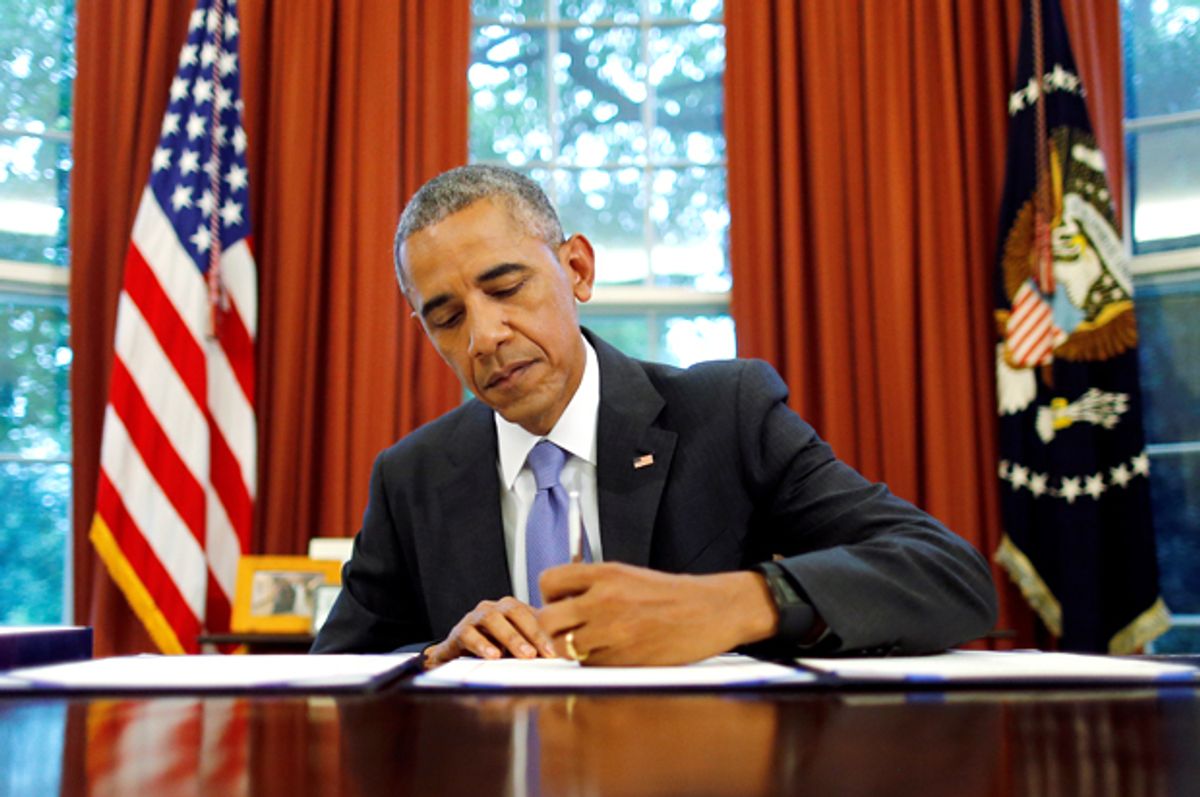 A bipartisan bill signed by President Obama will impose a "colonial" control board on Puerto Rico, critics say.

Sen. Bob Menéndez slammed the legislation as a form of "blatant colonialism" that puts "hedge funds ahead of the people." Bernie Sanders likewise condemned the bill as a "disaster for the people of Puerto Rico" that makes the U.S. the "colonial master" and takes away the Puerto Rican people's democratic rights.

President Obama signed the Puerto Rico Oversight, Management and Economic Stability Act, or PROMESA, on Thursday night, hours before Puerto Rico was obligated to pay $1.9 billion of its $70 billion debt on a July 1 deadline.

PROMESA permits a debt restructuring process, similar to bankruptcy, but at a great cost: In return, the U.S. federal government will impose an unelected control board onto the U.S. territory. This board will control Puerto Rico's finances, yet will consist of people who do not even live on the island.

The control board is likely to impose harsh austerity measures, including big cuts in social services, public institutions and pension funds.

PROMESA already forces the Puerto Rican government to reduce the minimum wage to $4.25 an hour for people under 25, while 45 percent of Puerto Ricans live in poverty and 60 percent of adults are unemployed.

Menéndez, who led the opposition to the bill, and proposed 30 of its 68 amendments, held a four-hour filibuster on the Senate floor on Tuesday. Sanders joined him in the filibuster.

This "is a vote to disenfranchise 3.5 million Americans," Menéndez said. He stressed that, contrary to what the Obama administration and Congress have claimed, the people of Puerto Rico are overwhelmingly against the bill.

Menéndez cited a poll that found that a staggering 69 percent of Puerto Rican voters oppose PROMESA.

On the Senate floor,  Menéndez listed off a long series of negative impacts the bill will have on the U.S. territory:

"It is a vote to authorize an unelected, unchecked and all-powerful control board to determine Puerto Rico’s destiny for a generation or more.

It is a vote to authorize an unelected and all-powerful control board that could close schools, shutter hospitals, and cut senior citizens' pensions to the bone.

It is a vote to force Puerto Rico, without their say, to go $370 million further in debt to pay for this omnipotent control board which they don't even want.

It is a vote to cut the minimum wage down to $4.25 per hour for younger workers in Puerto Rico.

It is a vote to make Puerto Ricans work long overtime hours without fair compensation or protection.

It is a vote to jeopardize collective bargaining agreements.

It is a vote to cut worker benefits and privatize inherent government functions.

It is a vote to place well-heeled hedge funds and creditors ahead of the people.

It is a vote to give the board the power to sell off and commercialize natural  treasures that belong to the people of Puerto Rico.

And at its worst, it is a vote to authorize an unelected, unchecked and all-powerful  control board that determines Puerto Rico's destiny for a generation or more."

Sanders also vociferously opposed the legislation, railing against it on the Senate floor.

In another article, Salon featured a video and transcript of Sanders' powerful Senate speech.

"This is a terrible piece of legislation, setting horrific precedent, and must not be passed," he said, adding, "the United States of America should not treat Puerto Rico as a colony. We cannot and must not take away the democratic rights of the 3.5 million Americans of Puerto Rico and give virtually all power on that island to a seven-member board."

Sanders called the legislation "both a political and economic disaster for the people of Puerto Rico" that "takes away their democratic rights and self-governance and will impose harsh austerity measures, which will make the poorest people in Puerto Rico even poorer."

"The United States must not become a colonial master, which is precisely what this legislation allows," he warned.

Despite the colonial nature of the legislation and its enormous unpopularity among Puerto Ricans themselves, however, the U.S. Congress and Obama administration pushed it through.

PROMESA passed in the House with a bipartisan vote of 297 to 127.

Puerto Rican Gov. Garcia Padilla himself opposes the control board, but signed an executive order after the bill was passed because it allowed the Puerto Rican government to "protect the limited resources available to the agencies listed in these orders and prevents that these can be seized by creditors, leaving Puerto Ricans without basic services," he said in a statement.

The plan is similar to the imposition of unelected city managers on impoverished U.S. cities like Flint, Michigan, which led to extreme water poisoning in a scandal that shook the country. But these managers are appointed by the state’s governor; in the case of Puerto Rico, an ostensibly self-governing U.S. territory, the control board is being imposed from outside.

Puerto Rico has been suffering from a destructive economic crisis since 2006. In his Senate speech, Sanders pointed out that Puerto Rico has lost 20 percent of its jobs in the past decades. Today, roughly 60 percent of Puerto Rico's adult population is either unemployed or has given up looking for work.

Moreover, 58 percent of Puerto Rican children live in poverty, and more than 150 public schools have been shut down in the past five years.

"In the midst of this human suffering and economic turmoil, it is morally repugnant that billionaire hedge fund managers on Wall Street are demanding that Puerto Rico fire teachers, close schools, cut pensions, and lower the minimum wage so that they can reap huge profits off the suffering and misery of the American citizens on that island," Sanders said.

He emphasized: "We have to understand that Puerto Rico's $70 billion in debt is unsustainable and unpayable. That is just a fact."

Some Democrats have admitted that they think the bill is bad, but argued it must be passed as it is the only way for Puerto Rico to be able to restructure its debts and avoid expensive legal fees when creditors take it to court.

Menéndez, however, pointed out that, regardless of PROMESA, bondholders are going to take Puerto Rico to court anyway, and will likely challenge the constitutionality of the bill.

As of Friday, in fact, Gov. Garcia Padilla's authorization was already challenged by a creditor lawsuit filed in a U.S. district court in Manhattan, New York, Reuters reported.

Before he signed the bill, President Obama told reporters, "I want to let the people of Puerto Rico know that although there are still some tough work that we're going to have to do to dig Puerto Rico out of the hole that it's in, this indicates how committed my administration is to making sure that they get the help they need."

The bill is frequently referred to as Puerto Rico Oversight, Management and Economic Stability Act, but, although this is one of its names, given all of the changes to the legislation in Congress, its official name is actually strangely the National Sea Grant College Program Act.

Gov. García Padilla has declared multiple states of emergency in Puerto Rico, including at the country's public pension, which is more than 99 percent underfunded; at the University of Puerto Rico and more, Reuters reported.

In the last year, Puerto Rico defaulted three times on portions of its debt.

Government institutions like Puerto Rico's semi-public power utility, PREPA, announced they will make large payments to their creditors. PREPA said it will make the $415 million payment due on Friday. In the past, PREPA has fought attempts at privatization.

Foreign creditors often call on weak, debt-burdened governments to privatize state assets and open them up to international capital.

Award-winning journalist Juan González and many other experts have expressed outrage at the passage of the "colonial" legislation."

"It’s astonishing to me how so many liberals in this country, who rail about American aggression abroad, are being so silent over this absolute imposition of colonial control by the United States government over the affairs of Puerto Rico," he said on Democracy Now.

González called it "a really dark day for the people of Puerto Rico, who are completely opposed to this bill."

Activists have long said Puerto Rico is already a U.S. colony; this bill only further reinforces this colonial relationship.