The "struggle" is not real: From tiny houses to my own lunch, poverty chic commodifies working-class life 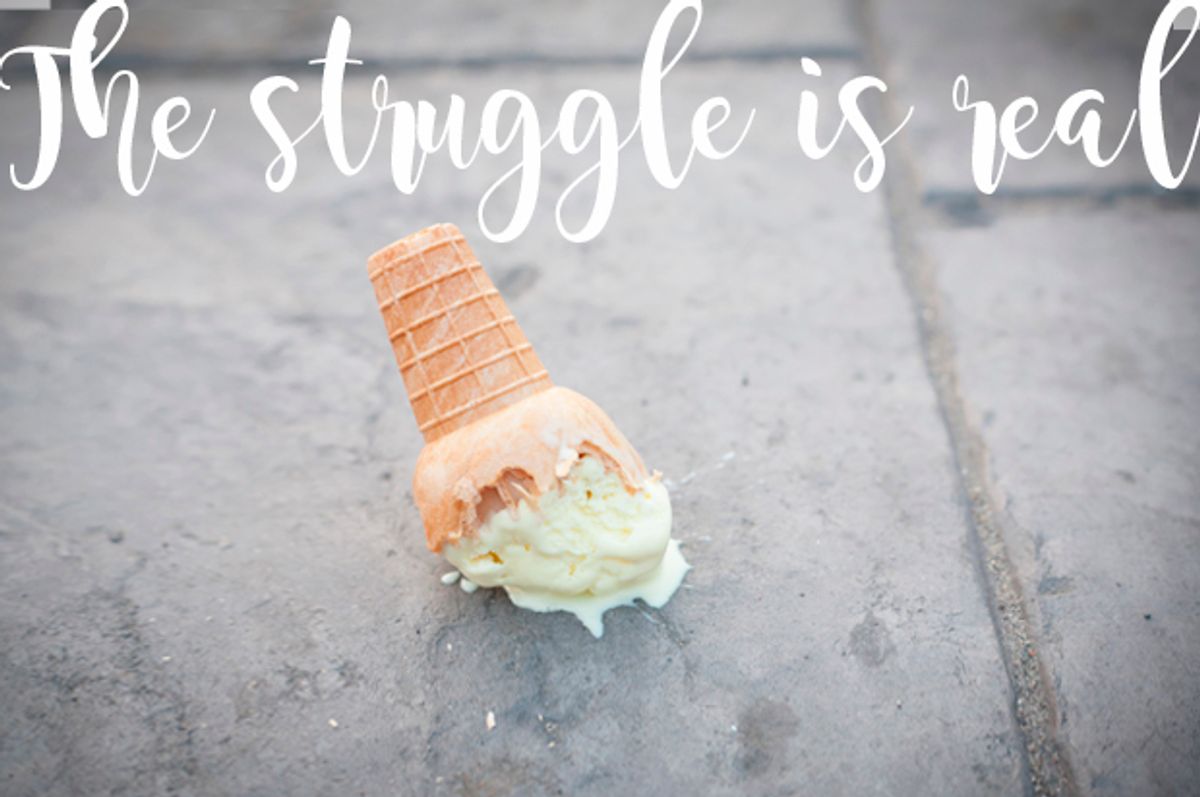 I was returning to my desk with my freshly heated lunch when a coworker passed me. “What is that?” she asked, motioning at my food. “Cornbread, pinto beans, collard greens, canned tomatoes, and chow chow,” I replied excitedly. “That looks like a struggle meal,” she said, crinkling her nose in what appeared to be judgment, disgust, or both.

“‘Struggle meal?’” I asked, unfamiliar with the phrase. “Yeah,” she said. “A struggle meal is what you eat when it’s the last day before you get paid and that’s all you can scrape together. You can’t afford to go get Chipotle,” she giggled. “Or if you do,” she continued, “you can’t get the guacamole, because it’s extra.”

It was an innocent exchange with a coworker, but her words stuck in my craw for weeks.

As a working-class woman who’s managed to secure a few white collar jobs, I’ve come to expect some real differences between me and my coworkers, but this one was new to me. I’ve been acknowledged for having a thick Southern accent, using so-called colloquialisms like “y’all” and “yonder,” and for nearly always bringing, rather than buying, my lunch. But this ostensibly innocuous exchange stung. It hurt because these were the foods my parents, especially my mother, worked hard to make for us when I was growing up. It hurt because those are the foods that sustained me as a child, that I still love eating today. They tie me tangibly to the rural land I left behind for a city I’ll never call home so I could have a better chance at making a living for myself than I would have if I’d stayed in my small hometown (one that, at one point over the years, suffered the highest unemployment rate in the state).

Ultimately, though, it hurt most because the term encompasses yet effectively erases what my parents, and to a lesser extent, I, did — and still do — to survive. We struggle.

Interestingly enough, a phrase that includes what we did — financially struggle — actually erases the lived experiences of people like me and my family whose struggles aren’t limited to being able to access our expendable income for frivolous items like takeout food. From the vantage point of someone whose family grew and killed most of what we ate out of financial necessity, the kind of struggle implied in a “struggle meal” is not a real struggle at all, but more of an irritant or inconvenience.

It goes beyond just this term, though.

The term “struggle meal” seems to me to be related to the phrase-turned-hashtag, “The Struggle Is Real.” For anyone unfamiliar, Urban Dictionary defines “the struggle is real” as “a (generally) ironic saying often used in place of the saying, ‘first world problems.’ With irony, it has a comical effect of dramatizing a non-critical, yet undesirable situation.” Popular iterations of this phrase often relay the “struggle” as running out of shampoo before running out of conditioner, or of having to deny oneself a donut because swimsuit season is approaching. With rampant social problems like inaccessible health care, childhood hunger, and homelessness (just to name a few) existing in the developed world, it’s apparent that there is not enough irony to make the incongruence between the phrase and people’s real struggles to survive funny.

A cursory search for the phrase online reveals not only its ubiquity, but its fundamental ties to affluence and financial stability. There are any number of internet memes and items available for sale, such as coffee mugs, iPhone cases, and hand-lettered art pieces to be displayed in people’s home offices that indicate for whom the “struggle” is real. These items belie, of course, the reality that roughly twenty percent of Americans — nearly 60 million people — lack access to the internet and that another 45 million Americans live below the poverty line. The “real struggle,” as explained by this phrase, is one confined to aesthetics and whimsy, not survival.

It's the linguistic equivalent of the ways mainstream society appropriates and commodifies working class aesthetics, like Mason jars, sweatbands, beards, thrift store clothing, and the like. This troubling trend even spills over into housing, with affluent folks trying on small, mobile houses from the Tiny House Movement as “proof”’ of how enlightened they are, having pared down their possessions to live more simply and happily. The crucial difference in these cases is that those who appropriate the items intrinsic to working class life and survival do so out of choice, rather than necessity.

As accessories, these items symbolize a part of the fend-for-yourself culture — of any race, ethnicity, or region — that has become strangely popular in mainstream society. Using or wearing these working class accessories lends the wearer a kind of can-do credibility that doesn’t come with white collar office attire — a rustic cachet without any of the hassles and struggles that comes with the lifestyle. Likewise, the people who use this language typically appear perfectly self-reliant (yet they are the ones who enjoy class, race, and, in the case of men, gender) privilege that is incongruent with the self-reliance working class people have to utilize in order to survive.

The linguistic appropriation and fetishization of “struggle” and its hashtag is particularly egregious when you stop to think what good it could actually do. Social media is replete with meaningful social activism, yet the terms I’ve identified are a pale facsimile. Utilizing a word that denotes hardship in a way that essentially parodies it is hurtful and offensive to those people whose lives are defined by real struggle; it also functions to neuter the word and divorce it from its power. Herein lies the most dangerous aspect of this linguistic cultural appropriation: it can render words ineffectual and wrest power from the speaker.

Many social theorists have analyzed the relationship between language and social power; perhaps most notably, French sociologist Pierre Bourdieu. He argued that language was not only a means of basic communication, but a means of power as well. To this end, his analyses include word choice, accents, and dialects. One of his most well-known treatises on the subject, "Language and Symbolic Power," explores the implications of the fraught relationship between language and power.

Whenever language is used, Bourdieu argues, speakers utilize their “accumulated linguistic resources” (or accrued knowledge about communication) and adapt their words according to their audience. This means every linguistic exchange, regardless of how minor or major, both relays and reproduces the social structure in which it exists. This is particularly salient in the political realm, because words — written or spoken — help determine action and power.

While hashtags and popular sayings about “struggle” may seem insignificant, they take place in a social context where words both give and deny power to speakers. In this case, taking a word whose very definition is one of difficulty and using it to create a flippant, casual meaning has the cumulative, dangerous effect of altering its original meaning — particularly as this relates to politics and power. This is perhaps most dangerous among the youth, who are most likely to utilize these types of communication and whose accumulated linguistic resources are likely not as sophisticated or fully-developed as older generations.

While cornbread, beans, and collard greens may be considered a “struggle meal” to some, to the people who were raised in families where it was that or not much else, they’re actually considered to be an accomplishment. After all, filling the bellies of you and your family, while consistently struggling to do so, is what helps us make it another day — and that is how many working class people define success.

Brook Bolen is a freelance writer, editor and proofreader. She lives with her husband, daughter and pitbulls in the heart of the Dirty South, and is routinely miffed to discover more people don't count cornbread and beans as their favorite meal. Connect with her @brookbolen