A CNN reporter says the WikiLeaks whistleblower may have attempted suicide. Manning is serving 35 years in prison 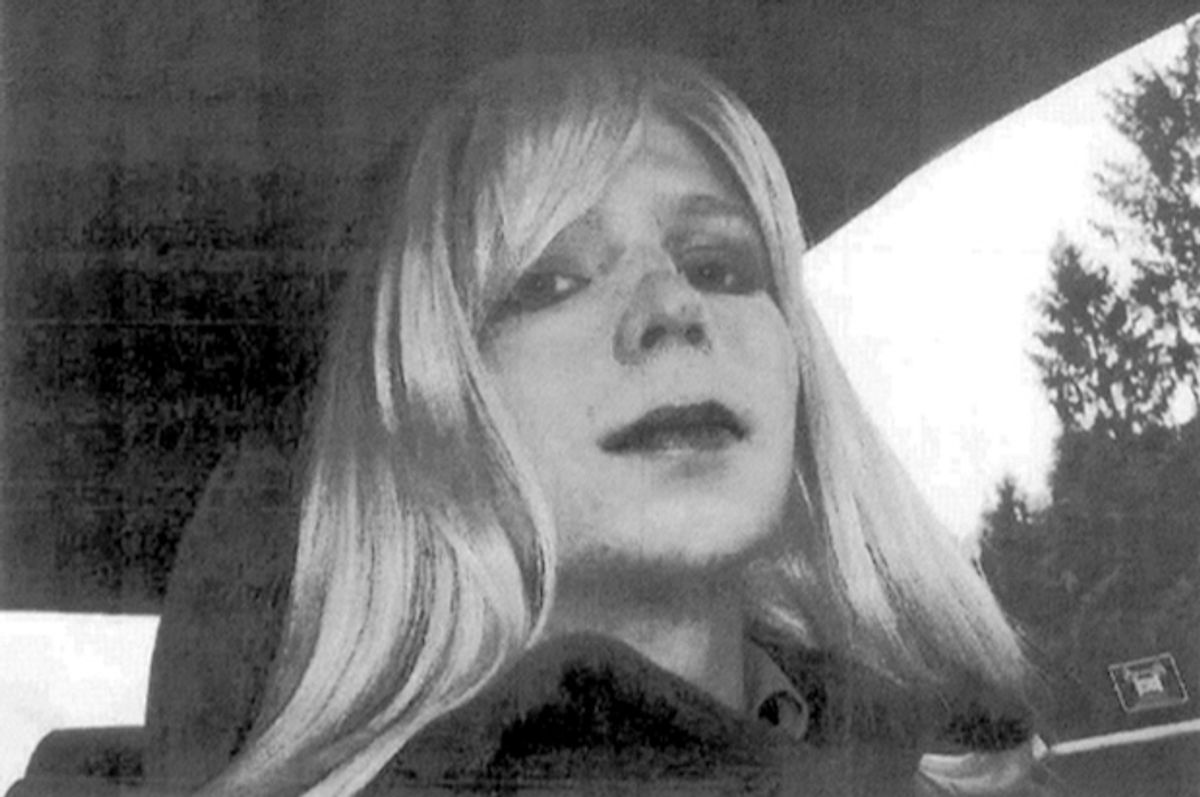 Imprisoned whistleblower Chelsea Manning was rushed to the hospital Tuesday after a suspected suicide attempt, according to several reports.

U.S. Army spokesperson Patrick Seiber confirmed to CNN that Manning was hospitalized "during the early hours of July 5th." An unnamed U.S. official said that this was because of a suspected suicide attempt.

American Civil Liberties Union attorney Chase Strangio said Manning has returned from the hospital, but reports of her alleged suicide attempt are unconfirmed.

TMZ reported that Manning may have attempted to hang herself, according to a source. Prison officials said she has since been released from the hospital and is being monitored.

Manning is being held at the Fort Leavenworth Disciplinary Barracks in Kansas.

Salon reached out to the Fort Leavenworth office. It did not comment on the case, and instead said to contact the U.S. Army Office of the Chief of Public Affairs. This office did not immediately return a request for comment.

A Fort Leavenworth spokesperson told Gawker via email, “Medical treatment of inmates at the United States Disciplinary Barracks is protected under the Health Information Protection Privacy Act (HIPPA). No information regarding their individual treatment can be released without their consent.”

Among the leaked materials were videos that show U.S. pilots massacring more than 100 civilians in Afghanistan and Iraq.

The video of a July 12, 2007 attack in Baghdad shows pilots in two U.S. helicopters killing more than a dozen people, including two Iraqi war correspondents working for Reuters and two children. When this video was released, it generated great controversy in the media.

In another attack, on May 4, 2009 in Granai, Afghanistan, the pilot of a U.S. plane massacred scores of civilians. The Afghan government said 140 civilians were killed in this incident.

Although Manning provided WikiLeaks with video of the Granai massacre, it was never released. WikiLeaks founder Julian Assange says former spokesperson Daniel Domscheit-Berg deleted it, along with thousands of other unpublished documents, when he left the organization. Assange accused Domscheit-Berg of having links to the FBI and CIA.

Manning's leaks led to reforms and inspired huge public debate, yet she was convicted on 21 charges in 2013, at age 25, and was dishonorably discharged and demoted.

After receiving her sentence, Chelsea Manning, formerly known as Bradley Manning, announced that she was transgender and identified as a woman.

Manning said that she had felt she was a woman since childhood. Manning asked to begin hormone therapy in order to transition, but the military did not cooperate. After she filed a lawsuit against the federal government, the U.S. Army approved her hormone therapy in 2015, saying it "is medically appropriate and necessary."

From prison, Manning has been outspoken about political issues. She writes regular columns for The Guardian. Her most recent pieces are about the end of the U.S. military's ban on transgender officers, the Orlando shooting and the government's brutal crackdown on whistleblowers.

The Obama administration has used the Espionage Act to punish whistleblowers who leaked to journalists more than all previous presidents combined.

Manning has written about the long periods of time she has been held "in highly restrictive solitary" confinement. The United Nations special rapporteur on torture, Juan Méndez, condemned the conditions of Manning's imprisonment as “cruel, inhuman and degrading treatment.”

The U.N. has said that solitary confinement for longer than 15 days can amount to torture. Méndez called for it to be banned in most cases, citing scientific studies that show just a few days of isolation can cause lasting mental damage.

An estimated 80,000 to 100,000 U.S. prisoners are held in solitary confinement every day, often for long periods of time.

Manning has the possibility of parole in the eighth year of her 35-year sentence. Press freedom advocates see her as a hero who sacrificed her freedom to inform Americans — and the world — about the crimes being committed by their government.