Former Olympian Oscar Pistorius gets only 6 years for killing his girlfriend, Reeva Steenkamp 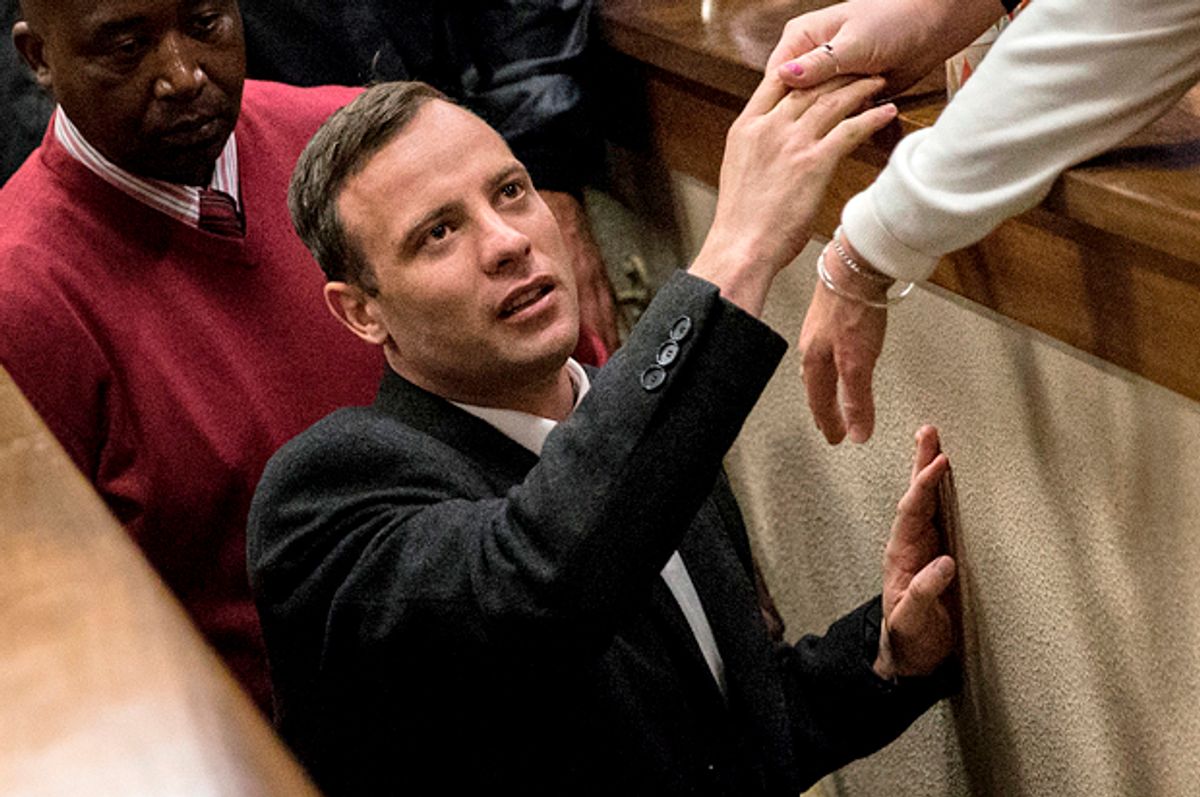 Stop me if you've heard this one before: A woman who's the victim of violence. A man who has the good fortune to be athletically gifted. And a judge who offers him a light sentence and a public expression of sympathetic concern. On Wednesday, the man at the center of the story this time was South African former Olympian and Paralympic gold medalist Oscar Pistorius, as he was handed the delicate punishment of six years in prison for the murder of his girlfriend, model Reeva Steenkamp.

Of this part there is no dispute: On Valentine's Day, 2013, Pistorius, the man who once went by the nickname "Blade Runner," shot and killed Steenkamp though a bathroom door in his Pretoria home. One of the bullets went through her head. Pistorius maintained that he'd mistaken her for an intruder — a not impossible to believe claim in an area known for its high violent crime rate. The U.S. Department of State warns visitors that "Crimes range from petty muggings to ATM scams to armed residential home invasions and murder. These crimes occur with frequency and in all neighborhoods."

Yet the prosecution had argued that Steenkamp's death was no accident, and that she'd died during a domestic dispute. Prior text messages from her to Pistorius revealed that she called him jealous, and that she admitted, "I'm scared of you sometimes and how you snap at me and of how you react to me." A neighbor claimed that she'd heard a woman screaming on the night of shooting. A former girlfriend  gave a tabloid interview in which she claimed, "He used to bite me a lot, pinch me in anger and in fun. I had bruises and scars. It was painful…. I had to hide his gun, I was so scared of him." Yet two years ago, Judge Thokozile Matilda Masipa chalked up Steenkamp's concerns by saying, "Normal relationships are dynamic and unpredictable most of the time, and human beings are fickle" — an assessment that writer Hadley Freeman sagely disputed in The Guardian, noting, "Being scared of someone is not normal."

Pistorius was initially convicted of South Africa's equivalent to manslaughter, a decision that was then reversed to a murder charge. Prosecutors had requested 15 years imprisonment, the country's minimum for a murder conviction. But his defense argued he needed extra leniency, saying, "He suffers from an anxiety disorder. We know that... when he was on his stumps, his balance was seriously compromised, and without anything he won't be able to defend himself…. The accused can never resume his career. The accused has punished himself and will punish himself for the rest of his life far more than any court of law can punish him."

So just leave the punishment to the killer, he'll handle it from here.

In handing down a sentence for less than half the usual bare minimum, Judge Masipa cited "mitigating" factors and said, "I am of the view that a long-term imprisonment will not serve justice… It must be one of the most difficult things for any accused to have to face the victims of his crime and to apologize… He’s a fallen hero who has lost his career and is ruined financially. The worst is that having taken the life of a fellow human being in the manner that he did, he cannot be at peace." Reminder: He shot a woman in the head.

Masipa's argument is a similar rationalization to the one heard just recently, when California Judge Aaron Persky went easy on former Stanford student and swimmer Brock Turner in his sexual assault case, granting him six months in county jail and probation for violating an unconscious fellow student. Perksy explained, "A prison sentence would have a severe impact on him."

It took an emotional and widely shared statement from Turner's victim to remind the world that the person Turner's actions had the real severe impact on was the woman he chose to assault.

Pistorius is likewise not a "hero" nor a victim of "difficult things." He's a convicted killer. And if anyone wants to talk of human suffering and what it's like to not know peace, the person to think of is not a golden athlete but the woman he killed, and the people who loved her. Her family couldn't even have an open casket funeral for her.  As a close friend of Steenkamp's told the BBC, "There's no closure. We couldn't even view her body in the coffin."