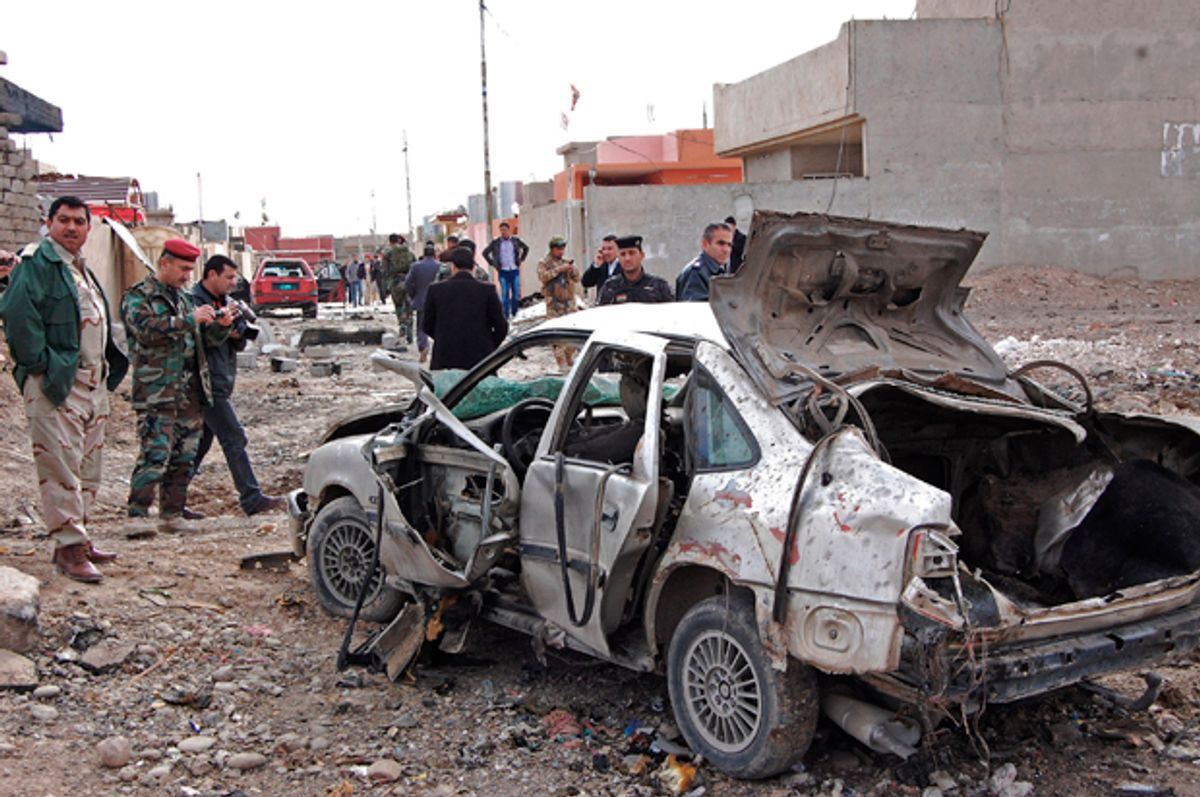 Iraqi security forces inspect the scene of a car bomb attack outside the northern city of Mosul, Iraq, Jan. 16, 2012. (AP)
--

Al-Qaeda was weak before the U.S.-led, U.K.-backed war in Iraq. Top British intelligence officials, however, repeatedly cautioned that a foreign military invasion of Iraq would strengthen extremist groups like al-Qaeda, and bring more into the country.

Prime Minister Tony Blair had been informed of this threat numerous times before 2003, but he ignored the warnings and supported the war effort anyway.

These revelations are among the findings of the Chilcot report, the nickname for the British government's massive, 2.6 million-word Iraq Inquiry, which concluded that the U.S.-led, U.K.-backed invasion of Iraq was neither justified nor necessary.

Intelligence agencies knew before the war that dictator Saddam Hussein did not pose a threat to Western countries, the Chilcot report shows, but an invasion of Iraq threatened to empower Islamist militants that actually did pose a threat.

In fact, the inquiry documents how the U.K.'s Joint Intelligence Committee clearly and persistently warned the Blair administration in the months leading up to the war that, in the words of the Chilcot report, "an invasion of Iraq was expected to increase the threat to the UK and UK interests from Al Qaida and its affiliates."

As a result of the destructive war, al-Qaeda metastasized throughout Iraq and the greater Middle East.

"Between 2003 and 2009, events in Iraq had undermined regional stability, including by allowing Al Qaida space in which to operate and unsecured borders across which its members might move," the report adds.

Prime Minister Blair admitted in October 2015 that the invasion of Iraq that he co-led gave birth to ISIS, a genocidal fascist group that still controls swaths of the war-torn country. Yet, in the early 2000s, Blair was actively ignoring intelligence that foreshadowed the rise of groups like ISIS.

Ignoring the real threat while exaggerating another

In October 2002, the Joint Intelligence Committee, or JIC, concluded that "the greatest terrorist threat in the event of military action against Iraq will come from Al Qaida and other Islamic extremists," the Chilcot report emphasizes.

Throughout the next several months leading up to the war, the JIC, the government office that advises the prime minister and directs and oversees the U.K.'s national intelligence agencies, reiterated this warning.

"Al Qaida and associated groups will continue to represent by far the greatest terrorist threat to Western interests, and that threat will be heightened by military action against Iraq," the JIC stressed months before the war began.

At this same time, nevertheless, Blair was rebuking this intelligence and instead arguing that the greatest threat was Saddam Hussein.

John Chilcot, a senior politician who sits on the British government’s Privy Council advisory board and who was appointed as chair of the Iraq Inquiry, implied in his public statement on the report that Blair was exaggerating a non-existent threat while denying the real one.

“There was no imminent threat from Saddam Hussein,” Chilcot stated bluntly. He cited a March 2003 speech in the House of Commons in which Prime Minister Blair insisted that the possibility of extremist groups getting their hands on Hussein's supposed "weapons of mass destruction" was "a real and present danger to Britain and its national security."

"Blair had been warned, however, that military action would increase the threat from Al Qaida to the UK and to UK interests," Chilcot pointed out.

Moreover, before he made these remarks, Blair "had also been warned that an invasion might lead to Iraq’s weapons and capabilities being transferred into the hands of terrorists."

The Iraq Inquiry makes it clear that Saddam Hussein did not in fact have WMDs. "Iraq’s programmes to develop and produce chemical, biological and nuclear weapons had been dismantled," the report notes.

Also highlighted in the report is the fact that "there was no evidence of links between Iraq and Al Qaida," although the U.S. and U.K. implied this to sell the war to the public.

In November 2001, the JIC reported that Saddam Hussein had in fact "refused to permit any Al Qaida presence in Iraq," the Iraq Inquiry points out.

The JIC said there was no evidence that Osama bin Laden's "organisation has ever had a presence in Iraq," and noted supposed evidence of contact between Iraq and Osama bin Laden was “fragmentary and uncorroborated.”

Practical co-operation between Iraq and Al Qaida was “unlikely because of mutual mistrust," the British intelligence office added. There was "no credible evidence of covert transfers of WMD-related technology and expertise to terrorist groups."

Chilcot said unambiguously, "It is now clear that policy on Iraq was made on the basis of flawed intelligence and assessments." He specified that the British government’s judgments about Iraq’s weapons capabilities "were presented with a certainty that was not justified."

Endangering instead of protecting

Even if the WMD intelligence had been correct, however, the Chilcot report shows that the American and British governments were actually compounding the threats to their citizens, not protecting them, by invading Iraq.

The Iraq Inquiry's 150-page executive summary has an entire section titled "The predicted increase in the threat to the UK as a result of military action in Iraq." It shows how the Blair administration ignored the warnings of its own top intelligence officials.

On Feb. 10, 2003, the JIC reiterated its previous warnings in a new report, the inquiry indicates. "The broader threat from Islamist terrorists will also increase in the event of war, reflecting intensified anti-US/anti-Western sentiment in the Muslim world, including among Muslim communities in the West," the intelligence office warned.

"And there is a risk that the transfer of CB [chemical and biological] material or expertise, during or in the aftermath of conflict, will enhance Al Qaida’s capabilities," the JIC added.

On Feb. 11, the JIC followed up, informing the British government that Osama bin Laden had issued a call for Muslims everywhere to take up arms in defense of Iraq. On Feb. 16, the JIC noted that bin Laden had another call for “compulsory jihad” by Muslims against the West.

A Feb. 19 JIC report predicted that these threats from Islamist extremists were likely to continue, and to grow.

Labour Party lawmaker Tam Dalyell asked Prime Minister Blair in a debate in the House of Commons in March 2003, "What could be more calculated to act as a recruiting sergeant for a young generation throughout the Islamic and Arab world than putting 600 cruise missiles... on to Baghdad and Iraq?"

Blair, the leader of Dalyell's own party, pushed back. "Unless we take action against them, they will grow. That is why we should act," he insisted. The opposite happened.

Once again, in March, just days before the U.S. and U.K. launched their invasion, the JIC was still warning Prime Minister BLair "that the threat from Al Qaida would increase at the onset of military action against Iraq," the Chilcot report notes.

The Iraq Inquiry asked Blair if he had read the February JIC report and whether he considered it when deciding to take military action.

"I was aware of the JIC Assessment of 10 February that the Al Qaida threat to the UK would increase," Blair replied. "But I took the view then and take the same view now that to have backed down because of the threat of terrorism would be completely wrong."

This was not the first time that the British prime minister had acknowledged the warnings of the JIC. Blair responded to the intelligence office's Feb. 10 report in a response he issued later in 2003.

"One of the most difficult aspects of this is that there was obviously a danger that in attacking Iraq you ended up provoking the very thing you were trying to avoid," Blair told the Intelligence and Security Committee.

"On the other hand I think you had to ask the question, ‘Could you really, as a result of that fear, leave the possibility that in time developed into a nexus between terrorism and WMD in an event?'" he continued.

Blair's remarks were reported in the British media at the time. Relaying the argument of the health secretary in an article titled "Blair 'right to over-ride terror warnings,'" the BBC reported that the "prime minister was right to 'exercise his judgement' and take Britain to war with Iraq despite warnings that it could increase the risk of terrorists getting weapons of mass destruction."