No transparency in Washington: How Senate members get away with burying campaign finances

Senators are going through policy loopholes to hide finance reports, and Mitch McConnell is helping them do it 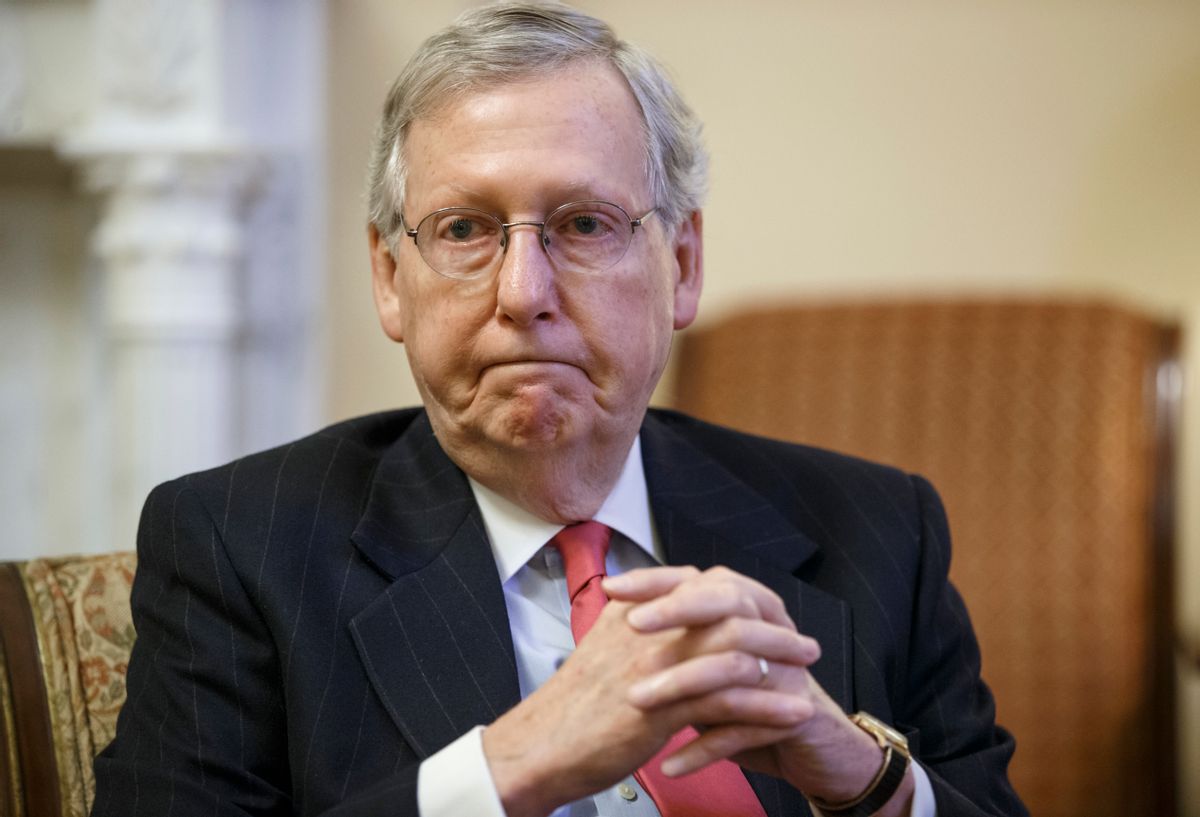 FILE -In this Dec. 17, 2014 file photo, Sen. Mitch McConnell, R-Ky., talks about his agenda for a GOP-controlled Congress during an interview with The Associated Press on Capitol Hill in Washington. McConnell faces a nearly impossible task this election year: protecting Senate Republicans from the political upheaval of Donald Trump’s presidential campaign. Trump’s polar opposite in almost every way, the close-mouthed, uncharismatic 74-year-old finally got his dream job just last year and is trying to keep it, even if a Trump backlash provokes a Democratic tidal wave in November. (AP Photo/J. Scott Applewhite, File)
--

Last week, the books closed on the second quarter of fundraising for this year’s congressional candidates. On July 15, the latest campaign finance reports are due at the Federal Election Commission, giving the latest update on the money behind some of the people who want to represent us.

Why just “some?” Because, unlike candidates for every other federal office, those running for the 34 Senate seats up for election this year don’t have to file their forms electronically.

Yes, it’s true: In this, the 16th year of the 21st century, members and would-be members of the U.S. Congress’s upper chamber continue to send their campaign finance forms to the authorities on paper using the U.S. mail.

It’s egregiously inefficient, not to mention unecological, as the reports that have to be printed out generally run thousands of pages. It delays disclosure, and it costs taxpayers nearly $700,000 a year.

It has also produced rare bipartisan consensus on at least one campaign-finance reform bill: 45 members of the Senate, including such senior Republicans as Thad Cochran of Mississippi, Susan Collins of Maine, Rob Portman of Ohio and Chuck Grassley of Iowa, have signed on as cosponsors of the Senate Campaign Disclosure Parity Act, which would require Senate candidates, like candidates for the House and the White House, to file campaign finance disclosure forms electronically.

Despite this and despite the endorsement of the Federal Election Commission, an agency whose three Democratic and three Republican commissioners usually can’t agree on anything, the legislation — “a no-brainer,” in the words of its author, Sen. Jon Tester — has been languishing in legislative limbo for more than a decade. “None, zippo, none,” Tester says when asked if there has been any action on his latest version of the bill, introduced early last year. Pressed to say why, Tester gives a two-word answer.

McConnell, a Kentucky Republican, has been a fierce opponent of laws limiting campaign contributions and expanding campaign finance transparency since long before he became the Senate’s majority leader. But his opposition to this bill, which is backed by so many members of his own party and which hits the favorite GOP goals of increasing government efficiency and reducing government spending, remains mysterious. Tester said that McConnell has in the past put a hold on the bill, a parliamentary maneuver senators can use to discourage action on a measure. We’ve contacted McConnell’s office to request an explanation, but have not yet heard back.

In a budget document filed this year with Congress, the FEC recommends the Senate require e-filing and adds why: "Mandatory electronic filing for Senate reports will create considerable cost savings and will result in easier, more efficient dissemination of data."

Unlike the electronic reports filed by House candidates, presidential candidates and a wide range of campaign committees — which can be downloaded within minutes of filing — Senate reports only have to be postmarked by the filing deadline, the FEC notes. They are mailed to the Secretary of the Senate, where staffers must then scan the reports — again, often thousands of pages — for transmission to the FEC, where it then can take up to 30 days to integrate them into searchable databases. Estimated cost is “at least $681,000 per year” for the FEC’s processing costs alone, the agency told Congress.

This isn’t the 1950s, Tester notes dryly. “We have the ability now to file electronically, save money, save work and let people know immediately who gave what to whom.”

In some ways, Tester seems an unlikely campaign finance reformer. As chairman of the Democratic Senatorial Campaign Committee, he’s one of his party’s top fundraisers this cycle, and a very successful one at that. As of its latest filing, the DSCC had raked in more than $88 million for the 2016 cycle, putting Tester nearly $20 million ahead of the counterpart at the National Republican Senatorial Committee, Sen. Roger Wicker (a Mississippi Republican who has co-sponsored Tester’s e-filing bill).

Yet Tester, a pro-gun Democrat who has won two hotly contested (and, for Montana, high-dollar) elections in a coal state, says he yearns for shorter campaigns and less time calling wealthy potential donors. “People think I spend more time on the phone than I do,” he said. “But even spending a minute a day on this stuff is a minute less than you spend doing policy or thinking about the farm.”

As the last part of that remark suggests, Tester, who will turn 60 next month, definitely does not fit the standard Inside-the-Beltway mold. He still raises grains, peas and beans on a tract of land that has been in his family for generations. Lest the organic farmer label make you think granola and Birkenstocks, Tester sports a flat-top haircut (the elaborately mustachioed barber who buzzes it for $8 was featured in not one but two of the senator’s campaign ads). And for trips back to Washington, he and his wife — his high-school sweetheart, Sharla — pack a valise filled with meat they butchered themselves. “Then we know what we’re eating, he told NPR last year.

Tester started his public career in the town of Big Sandy, which despite its name boasted a population of 598 in the last census. A high-school music teacher (he switched from saxophone to trumpet after losing three fingers in an accident at the family butcher shop as a youngster) before becoming a full-time farmer, Tester served 10 years on the local school board before being elected to the state Senate.

He traces his views on the unhealthy influence of money on politics to the populist tradition of his home state, which enacted ultra-strict limits on campaign contributions after an 1899 vote-buying scandal, only to see those limits thrown out by the Supreme Court after the 2010 decision in Citizens United v. FEC.

Although he says doesn't "know [if] it will drive people to vote a certain way at the polls,” Tester supports campaign finance reform because “it’s the right thing to do.”

“People want to know what their elected officials are doing, and I don’t think we should be ashamed of what we are doing,” he says. “I think we ought to tell people. And if they don’t like it, they can tell us. It’s a good system.”