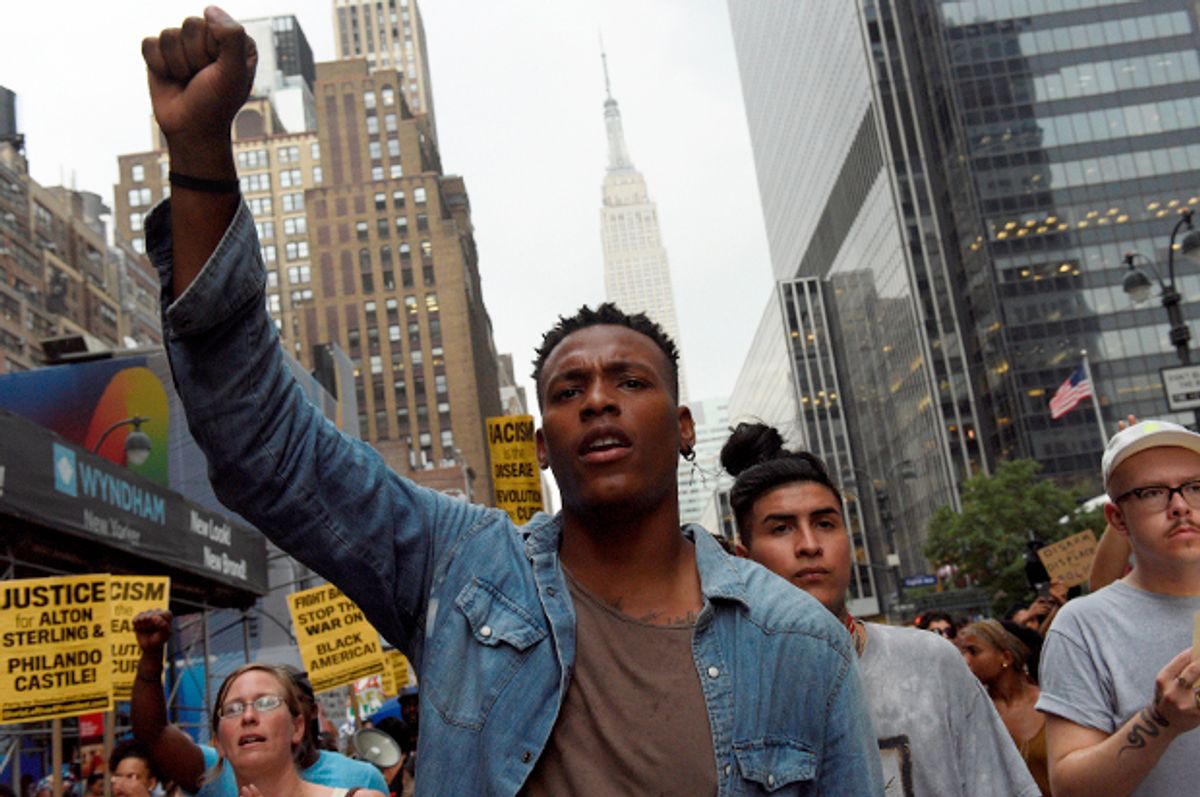 Racial Resentment and Attitudes About Police Use of Force

To explore attitudes about police violence, I use the ANES 2016 survey, which I’ve discussed in more detail here. ANES 2016 asks respondents, “In general, do the police treat whites better than blacks, treat blacks better than whites, or treat them both the same?” Among all respondents, 37% answer “the same” (2% say black people are treated better, 60% say whites are). Among white respondents, 42% say police treat whites and blacks equally, compared with a mere 19% of Black respondents (and a quarter of Latino respondents). There were large partisan differences as well: less than a fifth of Clinton supporters say police treat black people and people equally, compared to more than half of Trump supporters (53%).

Using a model created in collaboration with San Francisco State political scientist Jason McDaniel, I explore the effects of racial resentment on attitudes towards police behavior (see here for a discussion of racial resentment). In a model that controls for party identification, ideology, family income, education, age and gender, racial resentment strongly predicts white attitudes towards police violence. The charts below show that as resentment increases, respondents are less likely to say that whites are treated better by the police, more likely to say that police treat both white and black people the same.

Very few respondents say the police treat black people better than white people, but those what do have a mean score on the racial resentment scale of .78 (on a scale from 0 to 1). The mean score for those who say police treat whites better is .52. ANES 2016 also includes a feeling thermometer which asks respondents to place different groups on a thermometer from 1 (coldest) to 100 (warmest). The average placement of the police on the thermometer was 67. Among whites, the average placement was 71, among black people, 52, among Latinos, 65. Racial resentment also strongly affects feelings towards police. Among whites with the lowest resentment, the predicted thermometer score for police is 59. Among whites with the most resentment, it’s 76 (the mean score for Trump supporters is 74).

The survey also asks "How often do you think police officers use more force than is necessary under the circumstances when dealing with black people?" The same question is asked regarding white people. Half of respondents say police officers are equally likely to use force more often when dealing with black and white people (47% say police are more likely to use force on black people, and 3% on whites). Among white respondents, 57% said use of force was equal, compared with only 16% of black respondents (and 42% of Latino respondents). Sixty-eight percent of Trump supporters say police treat both races equally, compared with 34% of Clinton supporters. However, the data tell an unambiguous story about racial biases in police force. The Guardian finds that, “Young black men were nine times more likely than other Americans to be killed by police officers in 2015.” So far his year, the Guardian counts 558 people have been killed, disproportionately Native American people and black people. African-Americans make up 13% of the population but 25% of those killed by police (my calculations from the Guardian data). There are also discrepancies when the victim is unarmed. The Washington Post reports that, "black men were seven times more likely than white men to die by police gunfire while unarmed."

The Narrative of Black Violence

In a country that has identified black people as its criminal element, public safety (and perceived security) is more tied to the suppression of blacks than it is to the suppression of crime. And as long as the public insists on its myth of black criminality—almost as an article of faith—police practices will be impossible to reform. In the aftermath of many police shootings, the supposed criminality or violent tendencies of the victim is central to the media narrative. After Michael Brown was killed, the New York Times referred to him as “not an angel.” Raw Story captured CNN anchor Alisyn Camerota focusing on Sterling’s past while interviewing his aunt. The transcript reads:

“Does he have a history of violence?” Cameron asked.

“He was like a gentle giant,” Sandra Sterling replied.

“Can you tell us what his previous incident with the law was?” the CNN host pressed.

The aunt insisted that the charge “was something so minor that it’s not even worth saying.”

When a subdued black man is killed by police, focusing on the victim’s “history of violence” is indicative of the attitudes that make police violence so disturbingly frequent.

YouGov finds widespread support for many popular proposals. Fully 88 percent of Americans support body cameras and 74 percent support an outside investigation. However, body cameras can be covered up and there is some evidence they don’t succeed in reducing police violence if police officers can turn them off (there is also evidence they work). Training police in de-escalation techniques and reducing access to military-grade weapons could also reduce violence. In addition, community-based policing, like that embraced by the Dallas Police Department offers hope. Samuel Sinyangwe, a policy analyst at Campaign Zero tweets, “Of 4,054 people killed by police since 2013, only 6 cases have led to convictions of officers involved.” Independent investigations and federal oversight could reduce the incidence of officers being cleared of wrongdoing by prosecutors that frequently work with them.

The author would like to thank Jason McDaniel for insights on the models in this piece.