Donald Trump running mate roundtable: Salon writers on whom Trump will — and should — choose as his VP 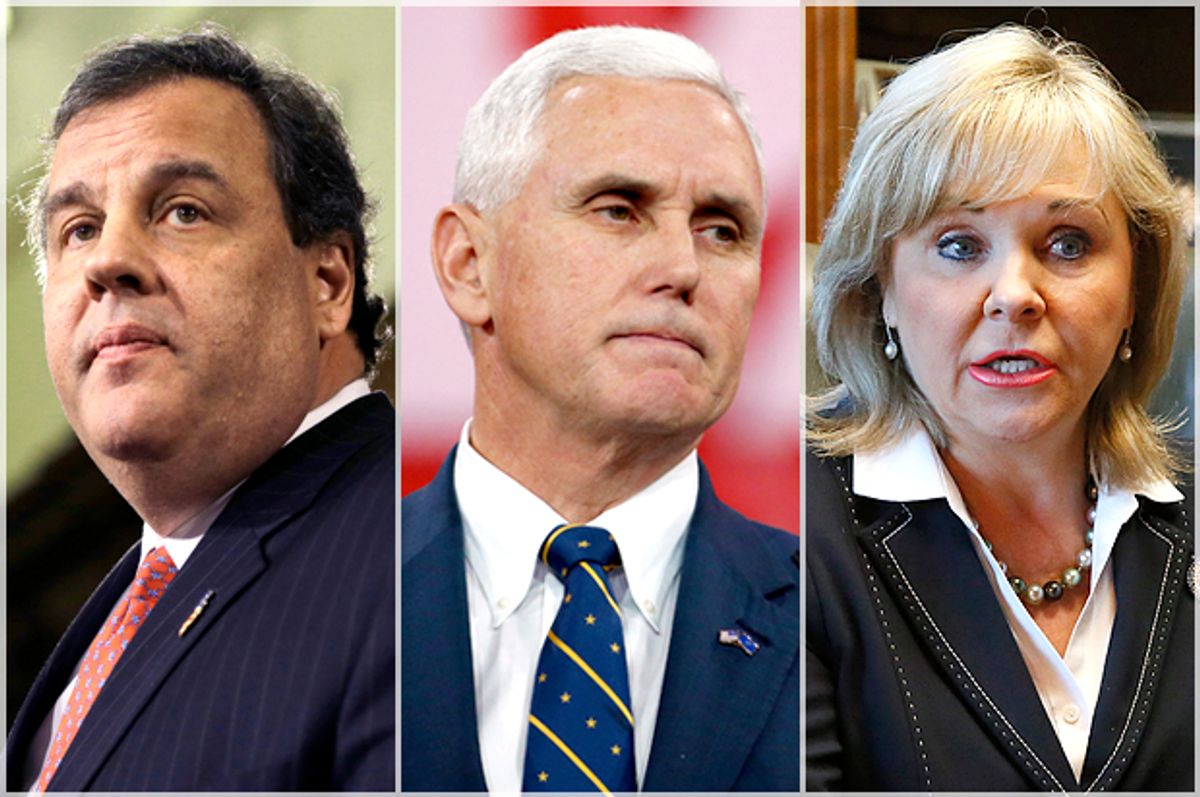 With Donald Trump expected to announce his vice presidential running mate this week in advance of the Republican National Convention in Cleveland, political prognostication season is in full swing.

Trump told the Washington Post on Monday that he had narrowed his search to five potential running mates and would choose "someone that would be really good" in the next few days. Speculation has centered on several candidates the Trump campaign is reportedly vetting, including Indiana Gov. Mike Pence, New Jersey Gov. Chris Christie, former House speaker Newt Gingrich, and retired Lt. Gen. Michael Flynn.

According to overseas betting markets, Pence is an overwhelming favorite to earn the GOP's vice presidential nomination. Irish bookmaker Paddy Power places Pence's odds at 4-6, meaning bettors wagering on Pence must be willing to risk more than they stand to win if he is chosen. Pence is followed by Gingrich and Christie, both at 5-1. (Gamblers looking for a nepotistic longshot might like the odds of Trump's daughter Ivanka at 66-1.)

As Trump prepares to announce his running mate, we asked Salon political writers to weigh in on both whom the presumptive Republican nominee will pick and whom he should pick:

Donald Trump will pick: His daughter, Ivanka, because he's not legally allowed to marry her and having her as his running mate is the next best option. He hasn't shown any interest in curtailing his baser instincts before, so why start now?

Donald Trump should pick: Oklahoma Gov. Mary Fallin, as a shield against accusations both of sexism and of insufficient fealty to the religious right.

Donald Trump will pick: Every single option contains a bundle of contradictions and problems, speculating upon the inner workings of Donald Trump's gut makes me queasy. That said, while Michael Flynn might scratch his clash of civilizations itch and Chris Christie, perpetually re-damaged by Bridgegate, is channelling the George Wallace-style cop-friendly war on crime thing...I'm guessing he'll go with Newt. Because Newt is an insider, which Trump knows he needs, and a firebrand, which Trump likes.

Donald Trump should pick: Mike Pence, I suppose. He's certainly a right-wing guy but he's what passes for mainstream establishment Republican these days. Trump needs to win over establishment-aligned and white-collar Republicans who might sit November out or even vote Clinton, though I think the effort will ultimately prove futile no matter who he picks

Donald Trump will pick: Mike Pence. He is a known quantity, albeit a not very interesting or particularly exciting one, and will show that Trump is "serious" about being a "responsible leader."
Donald Trump should pick: Pence. Trump's options are limited as few Republicans with aspirations for holding national office in the future will want to associate with his toxic political brand.

Donald Trump will pick: Newt Gingrich, because Newt has a nasty streak that Trump respects and he has made it very clear that he will not hesitate to use it.

Donald Trump should pick: Alabama Sen. Jeff Sessions, because they share an affinity for white supremacy but Sessions looks and sounds like a standard Republican so he might be able to reassure some wobbly members of the base that Trump will have an experienced adult by his side.

Donald Trump will pick: Indiana Gov. Mike Pence. Trump has repeatedly indicated he knows his weakness is the "political" and he has said he wants a running mate with Congressional experience. Pence comes with both federal and state experience, as a Republican leader in the House and the executive of a red/leaning purple state with an appeal to Ted Cruz voters. Granted, none of this helps him outside of the traditional GOP base.

Donald Trump should pick: Oklahoma Gov. Mary Fallin. While the Trump campaign apparently believes selecting a running mate who isn't a white man is "pandering," the conservative governor brings Congressional and executive experience like Pence along with the added appeal to a group Trump desperately needs to win the election – married white women.

Donald Trump will pick: Newt Gingrich. Trump can’t help acting the bully. In his mind, there will be no better way to get under Hillary Clinton’s skin than to run with one of her husband’s major tormentors from the 90s. All other considerations about Newt – the ethics problems that drove him out of Congress, his ego that will chafe at being the number-two guy and occasionally grab the spotlight away from Trump – will be secondary to that.

Donald Trump should pick: Mike Pence. He’s got genuine far-right credentials that appeal to the base. His colorlessness contrasted with Trump’s mania and off-the-cuff style can add a sense of quiet competence to the ticket.

Donald Trump will pick: If this is a serious question, then the needle is probably wavering between Mike Pence and Newt Gingrich, and likelier to come down on Pence. He's a hardcore conservative from a purplish state who will reassure the "values voters" along with the Republican establishment, and he isn't perceived as a lunatic. (Although, by the standards of any earlier point in political history, he basically is a lunatic.) That said, if Trump follows his own instincts instead of outside advice, he'll go with Gingrich, creating a class-5 hurricane of fatuous windbaggery on one ticket.

Donald Trump should pick: Rand Paul, who isn't on the list. No, I'm serious: Paul ran a dreadful presidential campaign and is kind of dumb, but his libertarian jazz-dance routine, where he doesn't care about gays or weed and is against overseas wars and NSA spying, could create real positioning problems for Hillary Clinton, and open the way for Trump to outflank her to the left on certain issues.