Pence for Trump VP? Three reasons why that could be a huge mistake

He's no game changer: Tapping Mike Pence for VP isn't enough to get Trump elected; he might even make it harder 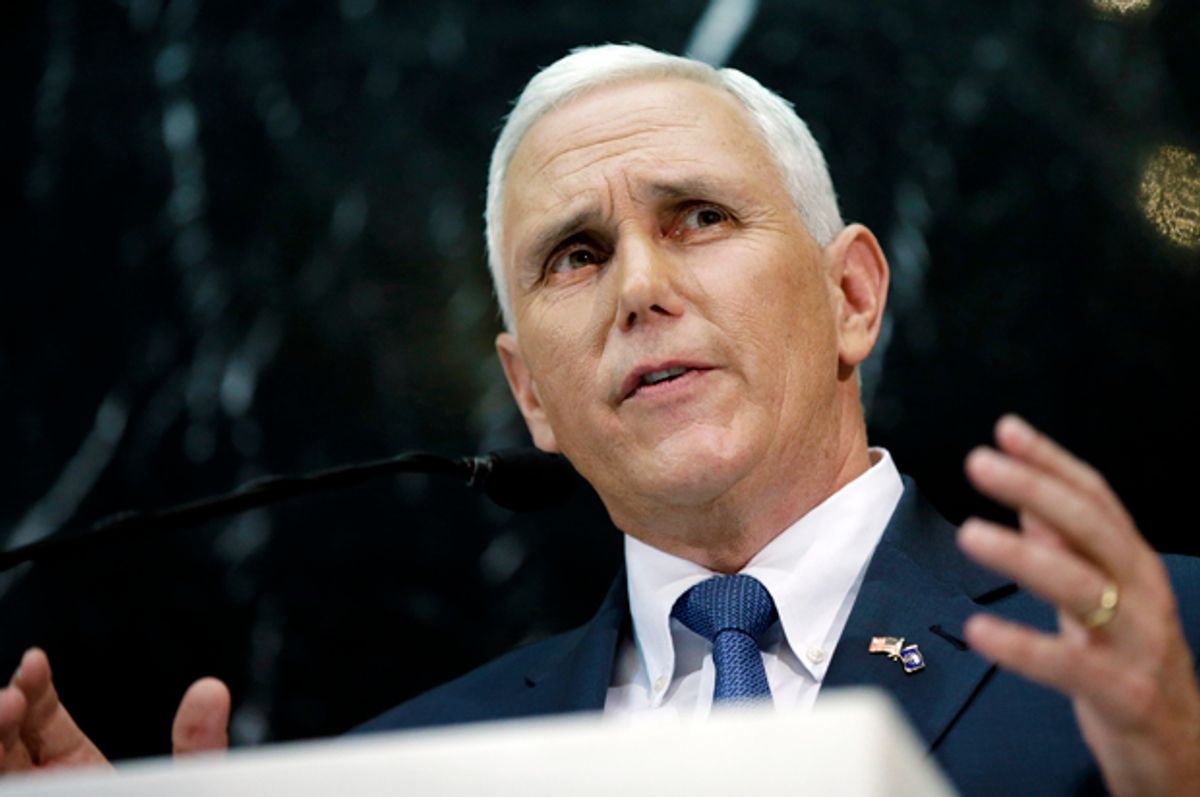 Given Donald Trump’s historic unpopularity as a presidential candidate, he might be well-served to choose a vice president who projects an aura of warmth and competence to compensate for his own lack of charm. If the rumors are true, however, he has instead chosen Republican governor Mike Pence of Indiana.

Viewed one way, this pick makes sense. If Trump is going to pull off a win in the fall, he needs to do well in the Rust Belt states. Pence is a salt-of-the-earth Midwesterner, a hard-right conservative on both the fiscal and social fronts who has managed his state’s budget well enough, or at least hasn’t cratered it by turning Indiana into a trickle-down economics experiment on meth. (Hi, Sam Brownback of Kansas!)

Pence served six terms in the House of Representatives, rising to the No. 3 leadership position in the GOP caucus in 2009, behind only Eric Cantor and John Boehner. He served on the House Foreign Affairs Committee, which gives a potential Trump administration some minimal foreign-policy cred. While in Congress, he was also a member of the Republican Study Committee (a hard-right group like the House Freedom Caucus, minus the nihilistic legislative tactics) and the Tea Party Caucus.

These affiliations and his personal evangelical faith should help the Indiana governor allay any fears among the far right of the Republican Party that Trump is a gay-loving, pro-choice New Yorker who has been pretending otherwise to win their votes.

An experienced second-in-command should allay concerns within the party about Trump’s own lack of experience and familiarity with Washington’s byzantine legislative processes and legions of power brokers who can scuttle a new president’s agenda before it gets started. The sober, nearly non-existent personality that makes him resemble the stern high-school principal in a John Hughes movie will seem like a calming counterpoint to Trump’s manic style.

That same lack of colorfulness ensures Pence won’t outshine Trump, which would be an unacceptable deal-breaker to the orange-tinted candidate. There is only room for one name on the marquee of “The Trump Show,” and it isn’t Mike Pence.

There are, however, three major drawbacks that stand out with Pence, if he is indeed the pick.

The first is his position on undocumented immigrants. While still in Congress in 2006, he worked on an immigration-reform program that was criticized by hardliners like Tom Tancredo and Pat Buchanan. The GOP has moved further to the right on this issue in the decade since. Whether the base will forgive him his earlier apostasy is a big question. (It didn’t work for Marco Rubio in the primaries.)

The second is that Pence’s brand of evangelical conservatism on social issues is only embraced by a rapidly shrinking segment of the population. Particularly on gay rights, Pence is way out of step with the majority of the country. He made this discovery himself last year when he signed Indiana’s deeply stupid Religious Freedom Restoration Act. Critics pointed out that the RFRA would allow religious business owners to discriminate against gays and lesbians. The resulting national outcry, including economic boycotts of Indiana, seemed to take Pence by surprise.

Which leads to the third drawback against Mike Pence: He has a reputation of being not very bright.

This is a charge that has followed Pence for years, and could be written off as smug condescension from smarty-pants intellectuals. But watch this clip of the governor’s incoherent defense of the state RFRA to George Stephanopolous last year. Aside from the defensiveness, it is clear that Pence has no idea about the practical effects of the bill, which he later proved by getting the legislature to send him another bill intended to “clarify” the first bill.

One could write off Pence’s surprise at the RFRA-inspired boycott of his state as the natural result of a person who lives in a right-wing bubble. After all, even though he must have known about Indiana’s struggles, North Carolina governor Pat McCrory seemed similarly shocked by the national outcry over the infamous anti-trans “bathroom bill” he signed into law earlier this year. A religious conservative like Pence, even one who worked in D.C. for better than a decade, could easily have been trapped in a bubble of epistemic closure.

But gay marriage is not the only issue on which Pence has defended the indefensible on specious grounds, only to have the courts slap him down. Just in the last few months, a federal judge tossed out a lawsuit Pence filed against the federal government to prevent the resettlement of Syrian refugees in Indiana, which he had filed on the grounds that the government’s two-year vetting process for refugees wouldn’t be enough to let into the country a sleeper cell of ISIS terrorists who would then settle in Evansville.

A judge also recently struck down the state’s new anti-abortion law, which Pence had tried to sell as a defense of the handicapped unborn (the bill outlawed abortions in the case of fetal abnormalities) but was found by a judge to be a gross imposition on a woman’s right to choose.

The choice of Pence would do nothing to solve the GOP’s long-term demographics problem. He’s a religious throwback in a country that is quickly leaving the Republican Party behind. He’s too dull to motivate voter turnout this fall on the right. He doesn’t get Donald Trump elected, but he doesn’t threaten to outshine the candidate either. Which in Trump’s world is the most important point.