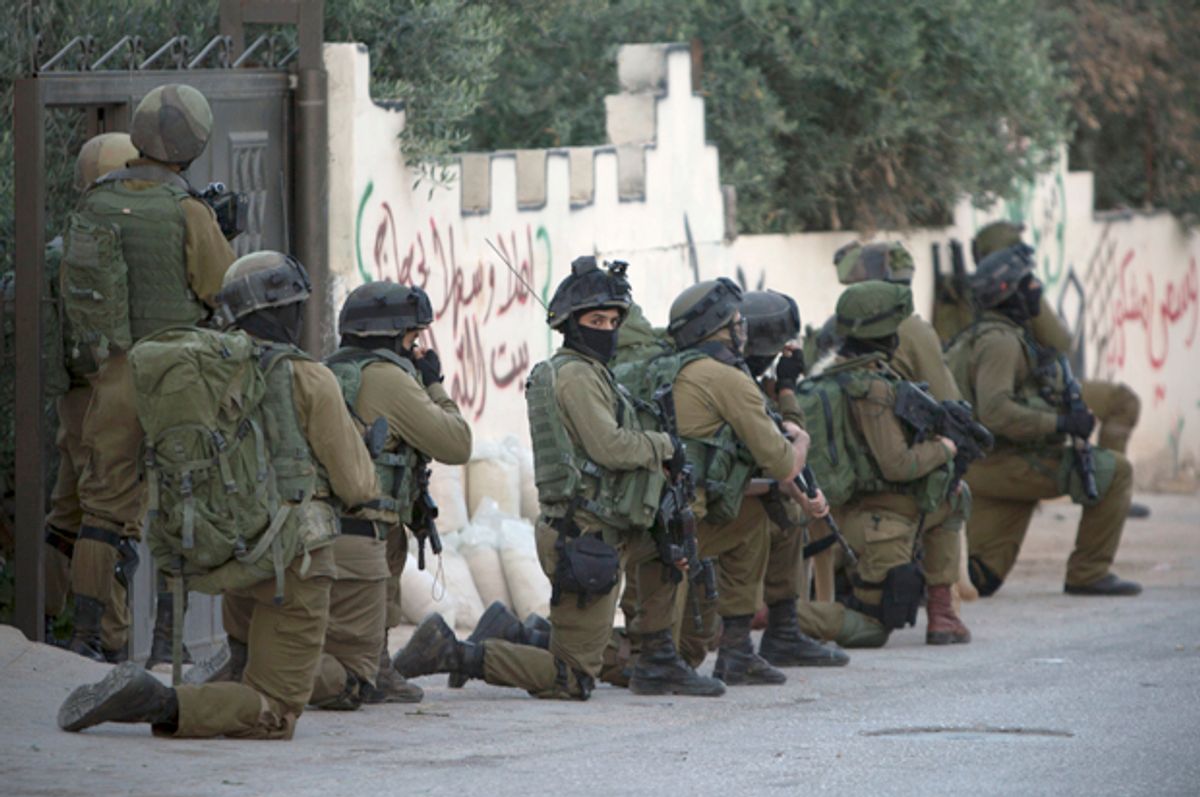 Israeli troops deploy during an army operation at West Bank village of Salem, May 30, 2016. (AP/Majdi Mohammed)
--

The man chosen as the Israeli military's new chief rabbi has previously implied that soldiers would be permitted to rape women in war.

This comes at a time when the Israeli government lurches further and further to the right, with what has been called "its most hard-right government ever."

Rabbi Col. Eyal Karim was nominated for the top religious position in the Israel Defense Forces, of IDF, by the chief of staff on Monday.

Karim was at the center of a media controversy in Israel in 2012, when it was revealed that, in 2003, he suggested on a religious website that soldiers were permitted to commit acts of rape during wartime.

"One of the important and crucial values in war is maintaining the fighting preparedness of the army … and the needs and emotions of the individual are pushed aside for the success of the nation at war," he wrote in his response to a question about soldiers raping civilians in war.

"Just as in war, the fence of risk-taking is breached on behalf of others, so are the fences of modesty and kashrut breached… Although fraternizing with a non-Jewess is a very bad thing, it is allowable in war out of consideration for the difficulties of the fighters," Karim continued, according to a translation in the Israeli media.

"Because the success of the collective is what mostly concerns us in war, the Torah allows the individual to satisfy his lust in the permitted conditions for the sake of the general success," he concluded.

In 2012, when this statement was widely publicized, Karim insisted it was misunderstood and had been taken out of context. He said he did not condone rape.

Karim has also previously argued that women should not be allowed to serve in the army.

On Tuesday, Karim released another statement saying that he opposes rape and now supports allowing women in the military.

"His appalling, racist and violent statement [regarding women] would be unacceptable in any instance of an appointment to a senior position," she added, in comments reported by Haaretz.

Lawmaker Aida Touma-Suleiman, the head of the Committee for the Advancement of Women’s Status, warned that Karim could likely create more "misogynistic interpretations of this kind."

This backlash led the IDF to temporarily reconsider his appointment. The Israeli military said it did not know about Karim's past statements and did not do a thorough background check.

The IDF spokesperson's office, however, insisted to the Israeli media on Tuesday that it has no intention to cancel Karim's appointment. On Wednesday, IDF Chief-of-Staff Gadi Eizenkot made it clear that Karim will be the army's chief rabbi.

"The fact that someone who has encouraged the rape of Palestinian women, and who holds such demeaning, blatantly racist and violently sexist ideas, could be considered as a candidate for chief rabbinate of the Israeli military speaks volumes about the lack of respect for Palestinians and other non-Jews the Israeli government and society is willing to tolerate, his current apology following public attention notwithstanding," she said.

"It exposes just how far the Israeli state has veered away from the ethical underpinnings of Jewish tradition in favor of ethnocentric militant nationalism," Rabbi Wise added.

In 2014, a similar controversy erupted when an Israeli professor and former IDF intelligence official insisted that only rape can stop Palestinian militants.

Mordechai Kedar, a professor in the department of Arabic at Israel’s Bar-Ilan University who served in military intelligence for 25 years, insisted in an interview on an Israel Radio program, "The only thing that can deter terrorists... is the knowledge that their sister or their mother will be raped."

“You have to understand the culture in which we live,” he added. “It sounds very bad, but that’s the Middle East.”

Israel is one of the U.S.'s closest allies, and receives more military aid than any other country in the world, by far.

Every year, the U.S. gives Israel more than $3 billion in unconditional military aid, and the Obama administration is considering increasing this figure.

Israel's current government is the most right-wing in its history. In May, former Prime Minister Ehud Barak warned that his country has been “infected by the seeds of fascism.”

“What has happened is a hostile takeover of the Israeli government by dangerous elements,” he cautioned. “And it’s just the beginning.”

At the same time Barak made these remarks, former Defense Minister Moshe Ya’alon resigned, after hard-line right-wing Prime Minister Benjamin Netanyahu offered the defense minister position to Avigdor Lieberman, one of the most extreme figures in Israeli politics.

Lieberman was compared to ISIS in March 2015, after he publicly called for beheading disloyal Palestinian citizens of Israel.

Explaining his decision to step down, Ya’alon, a fellow member of Netanyahu’s ruling right-wing Likud party, said “extremist and dangerous elements have taken over Israel.”