The many lies of Bill O’Reilly: Yes, blacks are regularly targeted by police across the U.S.

Bill O'Reilly must learn this now: The existence of structural racism is beyond debate — it is a fact 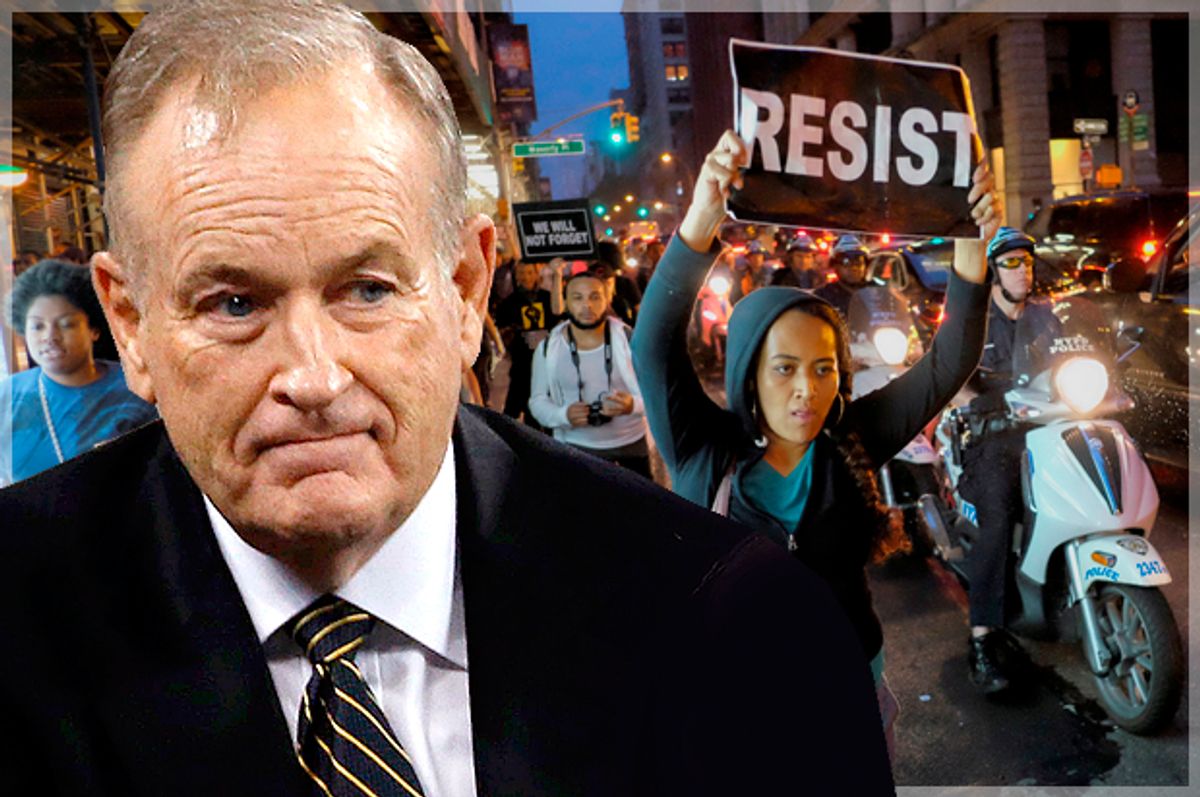 Fox News' Bill O’Reilly is waging a personal crusade against the Black Lives Matter movement and its efforts to stop police thuggery and violence against people of color.

He has spread dangerous rhetoric against the Black Lives Matter movement by slurring its members as essentially a “hate America group” and saying the organization is “killing Americans”. His encouragement found receptive ears when white supremacists shot five Black Lives Matter protesters in Minneapolis last November.

Bill O’Reilly is also a professional liar. He has repeatedly used that skill in his war against the Black Lives Matter movement. On last Friday’s episode of "The O’Reilly Factor," O’Reilly discussed the police killings of Alton Sterling and Philando Castile as well as the mass shooting in Dallas. He said:

I support the police and do not believe that they are targeting blacks in general. The statistics show that.

O’Reilly’s claim that police are not targeting black people is fundamentally untrue. It is not the result of differences of opinion about nuanced and complex facts or preliminary observations about new data in an emerging field of study.

The existence of structural racism in the United States is not an opinion. It is a fact.

American society is structured around maintaining white political, economic, and social privilege and power over and against people of color. This observation is not an opinion. It is a fact.

Police in the United States systematically harass, discriminate against, and treat black people unfairly as compared to whites.  This is also a fact—  one that logically follows from the reality that is the color line in America and police’s historic role in maintaining it.

Bill O’Reilly’s claim that police are not “targeting” black people has to confront a myriad of other inconvenient facts as well.

As extensively documented by Michelle Alexander in her book "The New Jim Crow," America’s police are part of a broader criminal justice system that racially discriminates against blacks (and Latinos) at almost every level from arrests through to sentencing and parole decisions.

Research by sociologists and criminologists has demonstrated that police routinely use “pretexts stops” (what is commonly known as “driving while black”) as a way of singling out African-American drivers — who in the vast majority of cases have committed no crime — for harassment and subsequent investigation. As was seen with the case of Sandra Bland, these acts of racial harassment by police can easily escalate into a tragic and deadly encounter.

Police in cities such as New York, Chicago, and Los Angeles have used “stop and frisk” tactics as means of harassing and intimidating people of color. These policies have been ruled to be unconstitutional. They are also racially discriminatory. Blacks and Latinos are much more likely to be stopped without cause by police. By comparison, whites were much less likely to be stopped, but when they were, had weapons and drugs on their person more often.

New work by Harvard University economist Roland G. Freyer, shows that police are significantly more likely to beat upon, throw to the ground, use pepper spray on, and use other types of “non-lethal” physical force against African-Americans as compared to whites. As detailed in a new report by the Center for Police Equity, these disparities are not a function of African-Americans being arrested at higher rates than whites, but rather of anti-black bias.

Writing in the journal Plos One, Cody Ross, an anthropologist at the University of California, Davis, analyzed the U.S. Police-Shooting Database and determined that police are more than 3 times likely to shoot unarmed African-Americans than they are whites.

And perhaps the most damning fact, when controlling for differences in population, America’s police kill black people at a rate three times that of whites.

O’Reilly’s fables about the Black Lives Matter movement, and American politics and society, more generally, are part of a concerted effort by the Right-wing news entertainment complex to distort reality and manipulate low information voters.

Disinformation: False information which is intentionally used to mislead.

Gray propaganda: Information that is presented as though it is coming from a legitimate and “neutral” source but in reality is inaccurate.

Ultimately, the right-wing media is not interested in the truth or in being responsible members of the Fourth Estate. They exist to advance the conservative agenda and expand the power of a very narrow set of private interests.

Bill O’Reilly claims that he is “fair and balanced” and only wants to tell the “truth” about police brutality against black Americans. In reality, most of his so-called “truths” are in fact lies and distortions that point to a single ugly conclusion. On a basic level, O’Reilly does not believe that black Americans should be entitled to their full and equal constitutionally protected rights under the law. As a conservative he is supposed to be forever vigilant against overreaching “big government” and its threat to freedom. But like most American conservatives, Bill O’Reilly is more than ready to accept the tyrannical treatment of black and brown people by the country’s police.