Sania Mirza doesn't need to "settle down": "No matter how many Wimbledons we win" women are still asked about motherhood and marriage 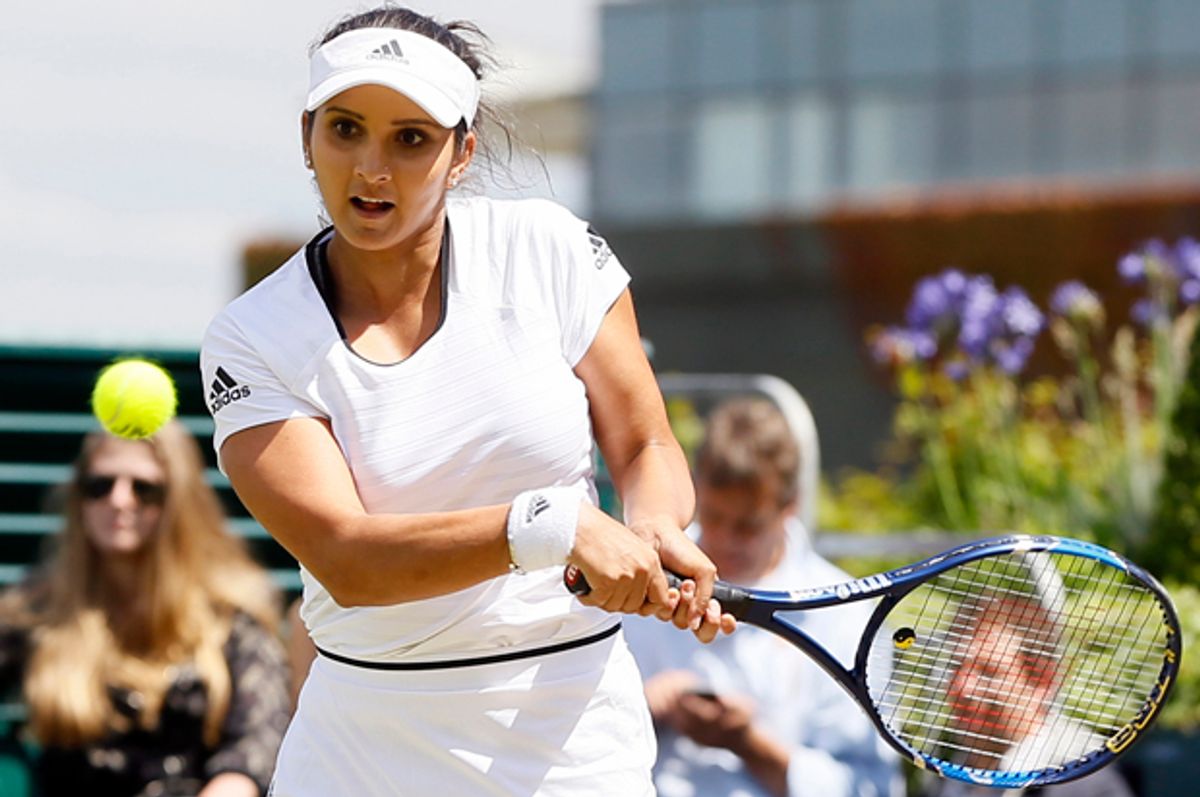 Sania Mirza knows a thing or two about hitting back gracefully. She is the current top ranked women's doubles tennis player in the world. In her home country of India, she's one of the most successful athletes of all time. She's 29 years old. And she really doesn't have any interest in your nonsense concerns about marriage and babies.

Mirza released her memoir, "Ace Against The Odds," earlier this month, and has been doing the publicity rounds to promote it. And in an interview this week with news anchor Rajdeep Sardesai, the doubles champ gave a coolly adept response when the conversation turned to single life.

After taking a beat, she replied, "You don't think I'm settled?"

Sardesai pressed on, saying, "You don't talk in the book about raising a family, motherhood, what's life beyond tennis going to be."

So Mirza made her position very clear. "You sound disappointed that I am not choosing motherhood over being number one in the world at this point of time," she answered. "That's one of the questions that as women, we have to face all the time. First is marriage, then is motherhood. Unfortunately, that's when we are settled and no matter how many Wimbledons we win or number ones in the world we become, we don't become 'settled'." She added, "Eventually it will happen, not right now."

Sardesai, to his credit, quickly owned up to his behavior, saying, "I must apologize. I phrased that question very badly. I promise you you're right. I would never ask this question to a male athlete." And Mirza, noting the occasion, said, "You're the first ever journalist who's ever apologized to me on national television."

Incredible. In a world in which women are routinely ignored, belittled and flat out creeped on when they're just going about their jobs, Mirza had the good sense to speak out about the kind of sexist questioning she no doubt receives all the time — and Sardesai had the class and professionalism to acknowledge what he'd done and make it right.

Mirza's response comes well-timed — right on the heels of Jennifer Aniston's no-doubt years-in-coming Huffington Post essay on how she's "fed up" with the "sport-like scrutiny and body shaming that occurs daily under the guise of 'journalism,' the 'First Amendment' and 'celebrity news.'" As the 47-year-old Golden Globe winner says, "I’m not in pursuit of motherhood because I feel incomplete in some way, as our celebrity news culture would lead us all to believe." And she adds, "We are complete with or without a mate, with or without a child. We get to decide for ourselves what is beautiful when it comes to our bodies…. We don’t need to be married or mothers to be complete. We get to determine our own 'happily ever after' for ourselves."

Relationships and weddings and babies make for easy tabloid fodder. They're things that can easily be pointed to as markers of female adulthood. But then again, so are tennis championships and hit movies and getting a degree or a mortgage or a promotion. And the measure of a woman is more than whether or not she reproduces. One journalist learned that this week. Just the whole rest of the industry to go.