President Trump = President Nixon: The Donald in the White House would be Tricky Dick on steroids

Trump is a cheap knockoff of the disgraced 37th president, borrowing only his worst aspects 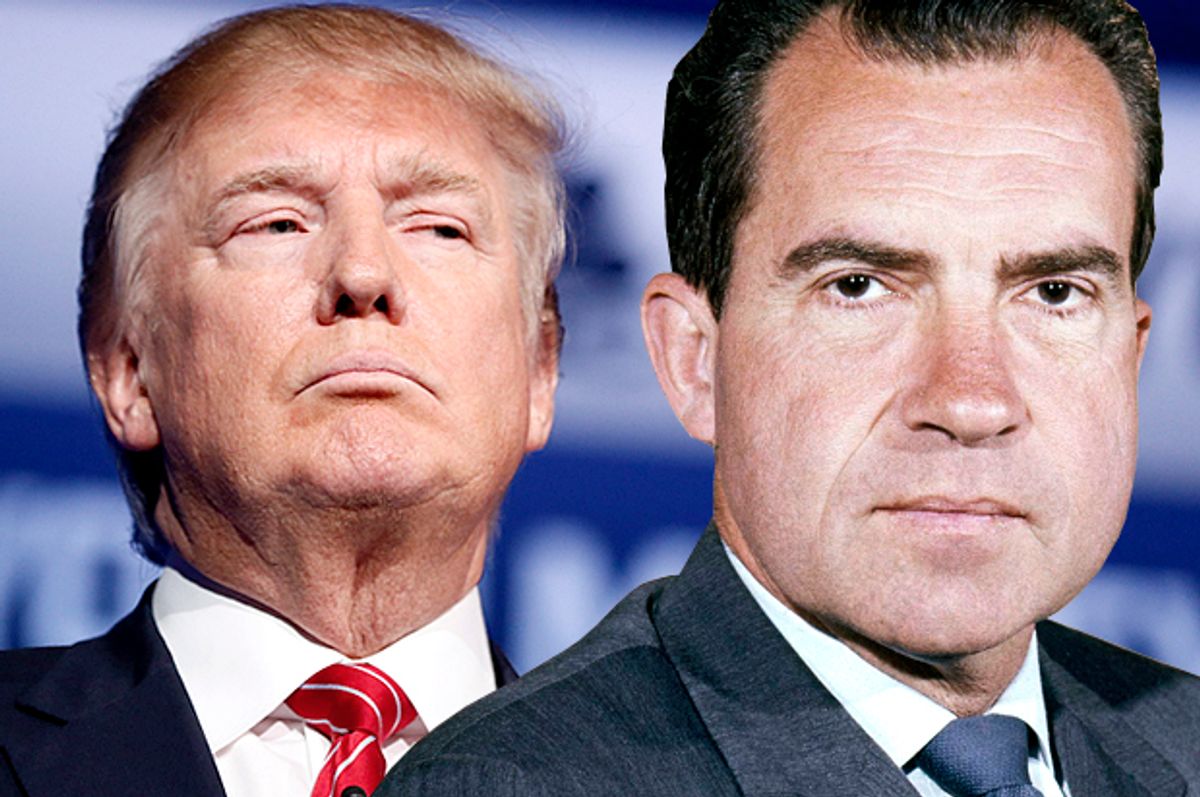 Hours before the official launch of the 2016 Republican National Convention in Cleveland, embattled Trump adviser Paul Manafort described the presumptive nominee's acceptance speech like so: "We started on the speech a couple of weeks ago. We looked at previous conventions speeches; the one he focused on, though, was Nixon in 1968."

Roughly a year after Nixon's "plumbers" broke into the Democratic National Committee headquarters in the Watergate hotel, the president's freshly confirmed attorney general, Elliot Richardson, promised Congress that he wouldn't fire special Watergate prosecutor Archibald Cox other than for gross malfeasance and the like.

Meanwhile, as Nixon crashed and burned, White House counsel John Dean and another White House official confirmed to Congress the existence of a secret recording system used by Nixon and previous administrations, and, therefore, the existence of tapes that could prove whether Nixon authorized the Watergate break-in, as well as the break-in at Daniel Ellsberg's psychiatrist's office. Consequently, special prosecutor Cox subpoenaed the tapes, prompting Nixon to engage in an obvious de facto admission of guilt by refusing to release the tapes, knowing the damning nature of what was on them.

On Saturday, October 20, 1973, Nixon ordered Attorney General Richardson to summarily fire the special prosecutor. Imagine, for a moment, if Bill Clinton had ordered the firing of Ken Starr during the most harrowing stages of the Monica Lewinsky scandal. That's exactly what Nixon did. Only much, much worse.

Instead of firing Cox, Richardson resigned in protest. Replacing Richardson as acting attorney general was his deputy, William Ruckelshaus. So, then, Nixon ordered Ruckelshaus to fire Cox. He refused and then resigned. That's two attorneys general in a single day. Ruckelshaus was subsequently replaced by solicitor general, and future Reagan Supreme Court nominee, Robert Bork. Nixon ordered Bork to fire Cox and, finally, Bork complied, then appointed Leon Jaworski who more or less carried on where Cox left off.

And it all happened in a single day.

Until Watergate, the American presidency allowed for all sorts of political latitude potentially exploited by anyone unethical enough to abuse the secrecy of the office. Many presidents had pushed the envelope, but few if any were as flagrant and notorious about it as Nixon.

The Saturday Night Massacre was just one example of how Nixon believed the president had tremendous extra-legal powers, and so Nixon relentlessly abused those powers in order to secure his legacy. "It's not illegal if the president does it," he said. Dirty tricks only scratched the surface. Many of Nixon's closest allies and hit-men would gather in the basement of the White House and, according to accounts by convicted Watergate conspirator G. Gordon Liddy, they'd get drunk on their own power, leading them to unquestioningly carry out Nixon's ordered with (temporary) impunity.

The same goes for Trump.

Fast forwarding to 2016, it's really easy to compare the Republican presumptive nominee with characters like Hitler or Mussolini. But it's really the Nixon comparison that's the most applicable and, indeed, possible. It's not a stretch to imagine Trump pursuing his presidential goals by any means necessary. He's absolutely narcissistic and power-hungry enough to top Nixon's behavior. In fact, his disciples are sending him to the GOP convention primarily because he's not an establishment Republican. He's a true maverick who will do whatever the hell he wants. That's why his people love him so much. (It also helps that they hate Obama, too.)

When Trump sits up at 3 a.m. scouring Twitter for political enemies to troll, or when we hear about Trump clandestinely planting favorable stories about himself in the press via various lame pseudonyms, anyone who knows history can't help but to think of Nixon circa 1973-74, holed up in the Oval Office or dark vestibule somewhere in the West Wing, compiling his Enemies List and deleting incriminating sections of the Nixon Tapes. When we review what happened on October 20, 1973, it's not difficult to envision Trump engaging in the same chicanery. The Saturday Night Massacre? Trump would easily do the same thing in his first 100 days, and it'd barely dent his approval ratings.

Better yet, his voters would adore him for it. Adore. Him.

That's the real danger here. In the early-to-middle 1970s, the public wasn't nearly as cynical as it is today, nor was the political landscape as divided. True, Nixon had his supporters until the very end. When he resigned, he still enjoyed the support of one-in-four Americans in spite of his array of nefarious actions. Today, however, we have a news media that's predisposed to downplaying such a scandal as de rigueur -- both sides do it, so whatever. We have an entire television network built around backstopping GOP leadership. The entire AM radio dial, too. Most, if not all, Republicans would deflect to Benghazi or Fast & Furious or whatever conservative shibboleth is popular at the time, and the charges would totally fail to stick to the wall. Remember, George W. Bush was re-elected in spite of presiding over 9/11, the failed Iraq War and Herculean levels of professional incompetence.

And then there's the internet.

While, yes, the internet would've exploded, a leader like Trump would be sufficiently propped up by artificially-induced reasonable doubt, not to mention legions of screechy fanboys. Trump probably wouldn't be able to get away with implementing a Hitler or Mussolini regime, but in today's climate? Nixon-style behavior would almost certainly fail to impact the Trump administration in the same way it ruined Nixon himself. And there's not a chance in hell Trump would ever resign from office under similar circumstances.