The best excuse Team Trump could come up with: "Some instances included fragments that reflected her own thinking" 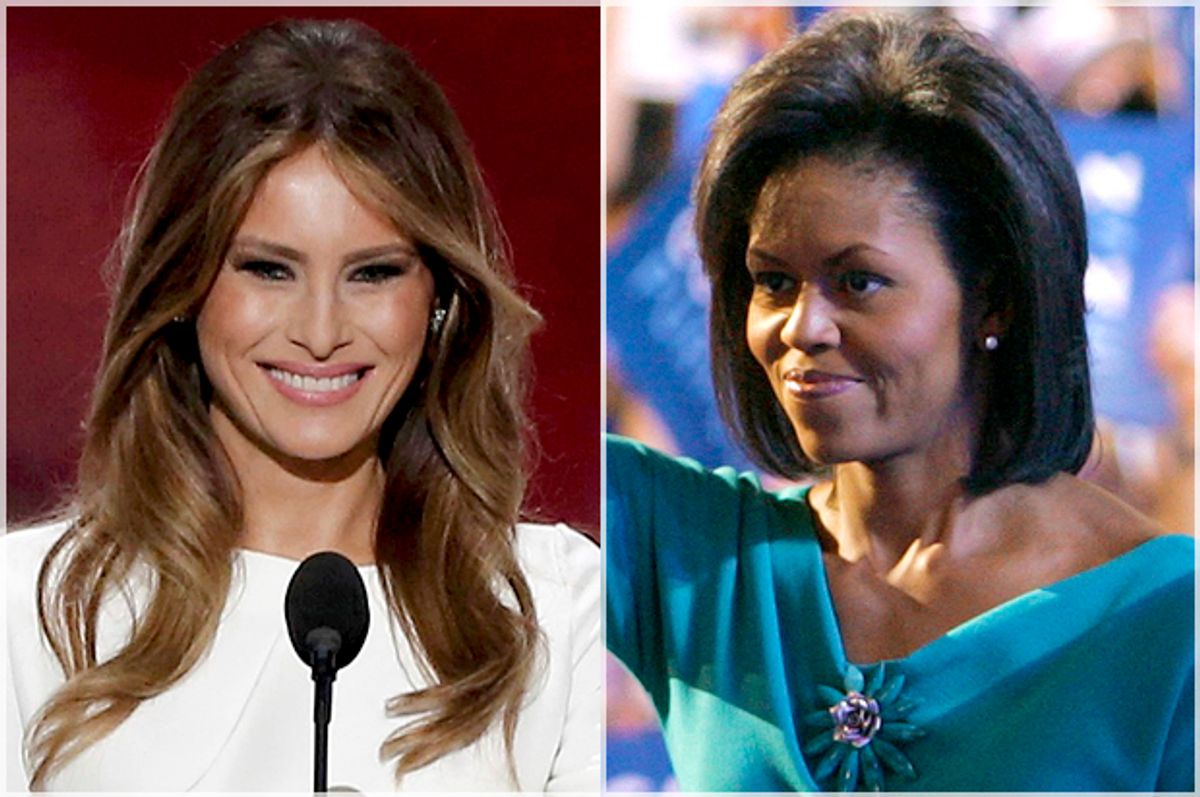 "Barack and I were raised with so many of the same values," Obama said at the time, "that you work hard for what you want in life; that your word is your bond and you do what you say you're going to do; that you treat people with dignity and respect, even if you don't know them, and even if you don't agree with them."

"From a young age, my parents impressed on me the values," Trump began to copy in Cleveland Monday night, "that you work hard for what you want in life; that your word is your bond and you do what you say and keep your promise; that you treat people with respect. They taught and showed me values and morals in their daily life."

The apparent plagiarism was first noted on Twitter and quickly became the main takeaway of the RNC's opening night:

If the side-by-side comparison was not damming enough, the former model gave a pre-RNC interview to NBC's Matt Lauer aboard her husband's private jet Monday.

"Did you practice it on the plane," the "Today" show host asked Trump of her highly anticipated speech.

"I read once over it. That's all," she replied confidently. "Because I wrote it with as little help as possible":

For his part, the presumptive Republican nominee who stole the show from his wife with his WWE-style introduction was quick to laud her speech even after the controversy surrounding her cribbing had taken hold of Twitter:

But by Tuesday morning, the curious case of Trump's plagiarism of Republicans' most hated woman, aside from Hillary Clinton, had become such a massive story the campaign was forced to finally address it.

And Trump apologized. Of course, that isn't true. Trump's stubborn refusal to apologize has held as strong as ever, so far.

"Some instances included fragments that reflected her own thinking," a statement from the campaign read Tuesday, seemingly throwing the candidate's wife under the bus.

Speaking on CNN, Trump's campaign manager attempted to deflect by bizarrely suggesting "this is once again an example of when a women threatens Hillary Clinton how she seeks out to demean her and take her down."

"To think that she would be cribbing Michelle Obama's words is crazy," Manafort told CNN's Chris Cuomo. "These are common words and values!" Getting even more defensive on CBS, Manafort offered this somewhat conceding push-back: "If it was something that was lifted subconsciously then why are we even talking about it?"

"What she did was use words that are common words" -- Trump campaign chairman on Melania's #GOPConvention speech https://t.co/N9gWKQuGSy — New Day (@NewDay) July 19, 2016

Perhaps unsurprisingly, Trump's strongest defense came not from her husband's official campaign but from her husband's rival turned lackey, New Jersey Governor Chris Christie. When asked on "Today" if he believed Trump's speech fit the definition of plagiarism, Christie replied: "Not when 93% of the speech is completely different than Michelle Obama’s speech."