The GOP's broken convention: The only thing uniting this party is their disdain for Hillary Clinton

Day 2 of the RNC was more of the same: Hillary-bashing, incoherent messaging and, yes, even more plagiarizing 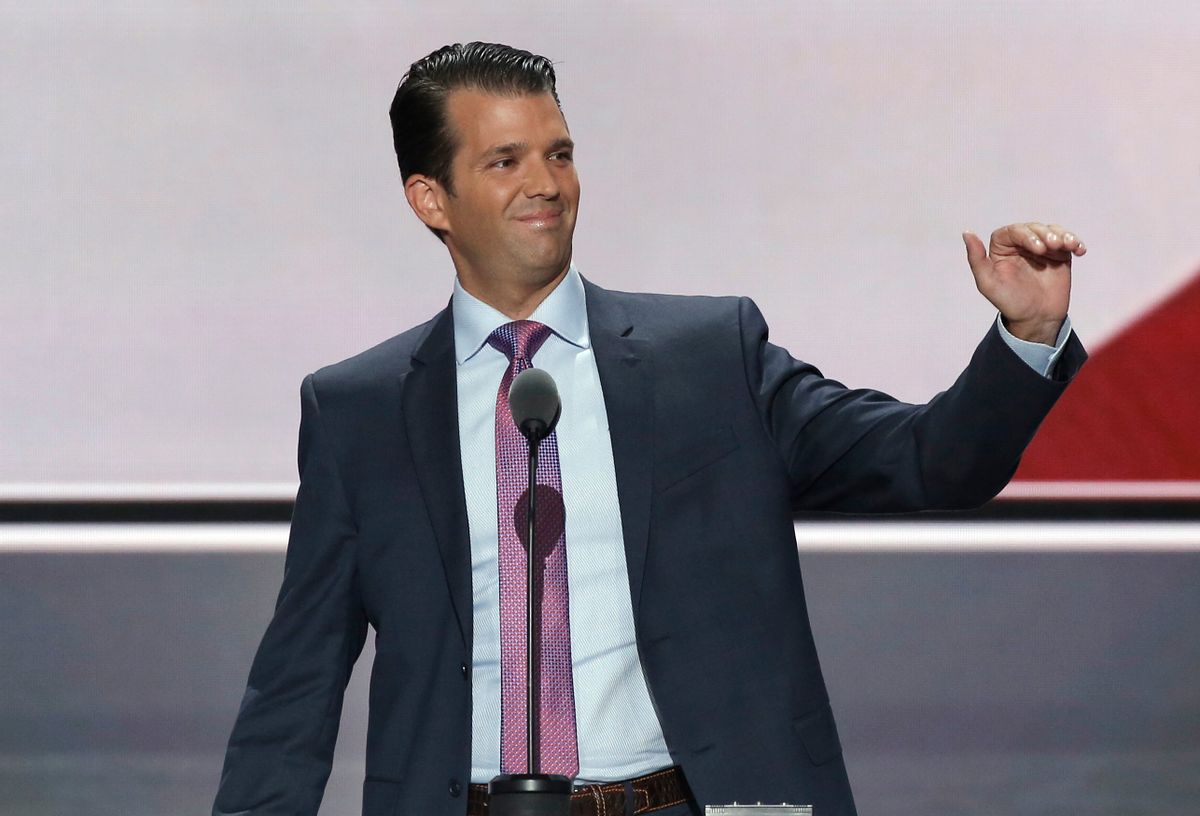 After a day of tumult over the Melania Trump plagiarism scandal combined with the startling news that Roger Ailes was reportedly out at Fox News due to his habit of sexually harassing the women who work for him, the convention finally got back to the business of putting on their big show. It didn't go very well. The theme had been billed as  "Make America Work Again" which had seemed to indicate it would be about the economy but they evidently just said "oh to hell with it, let's just bash Hillary again" because nobody mentioned it.

Paul Ryan opened the convention to explain the rules for the roll call and introduced Jeff Sessions to place Trump in nomination. Sessions set the mood with this dystopian image:

"We have gotten off course. And the people know it. We operate like the trench warfare battles of World War I where hundreds of thousands die while no ground is gained!"

He then said Trump is a "warrior and a winner" and nominated him for president. After some minor procedural skirmishes among the delegates they held the roll call and the New York delegation, led by Donald Jr, put Trump over the top. After all the #NeverTrump sturm und drang it was strangely anti-climactic.

Then came the speeches.  They didn't have another superstar line-up of entertainers like Scott Baio and Antonio Sabato Jr, but they managed to bring in some sports heroes like the Ultimate Fighter Dana White, and a woman golfer who used to have her own reality show on the Golf channel. That was it for the showbiz celebrities.

Arkansas Gov. Asa Hutchinson gave a rather dull speech, undoubtedly disappointing the planners who were looking for a little of that good old southern gothic whitewater magic. Former Attorney General Michael Mukasey then droned on about Clinton's alleged email criminality for a while without mentioning Trump, likely because he signed on to the National Review "Never Trump" issue saying Trump had homicidal fantasies and his policies would get him prosecuted for war crimes.  He must be voting third party.

A man who runs a weatherproofing company said something boring and then The Donald himself was beamed in from New York to give a video address in which he said everything was incredible and promised to do unbelievable things when he comes to the incredible, unbelievable convention tomorrow after which Mitch McConnell took the stage to insult Clinton by saying "not since Bagdad Bob has there been a public figure with such a tortured relationship with the truth." (Actually, there's someone else in the race whose record of dishonesty is truly epic.) Paul Ryan was next with a speech he seemed to be giving to a GOP that doesn't exist. He said Republicans don't believe in division based on class and race, boring the heck out of the Trump crowd which waved placards in desultory fashion and reluctantly pushed themselves to their feet as he concluded.

Twenty-two-year-old Tiffany Trump then delivered the first family testimonial. Surprisingly, it was one of the better speeches of the night because her description of her relationship with her father as one of nurturing and interest actually made him sound like a decent person. It stood out for the fact that it was one of the only speeches in the whole convention so far that portrayed Trump as a normal human being. It's uniqueness just points to the fact that there has been so little of the kind of "intimate portrait" of regular life that we usually see in presidential campaigns. One can guess that's because there really isn't much of it.

Unfortunately, that's not what this convention is about. By this time the crowd was clamoring for a big hunk of Trump red meat and Chris Christie was just the man to deliver it. He didn't actually give a speech, it was more of a show trial in front of a slavering mob shrieking "guilty!" and "lock her up" as Christie smugly delivered the "evidence."

This tweet by Rebecca Traister  accurately captures the mood:

Since Goody Rodham was placed in the water and thence did float & was observed conversing with a tall man in the woods, is she not GUILTY?

Republican strategist Steve Schmidt complained on MSNBC that this endless chanting of "lock her up" is a disturbing banana republic form of politics reminiscent of Pat Buchanan's infamous 1992 speech that was ecstatically received in the hall but repelled swing voters out in the country. It's chilling.

Just as I noted that Melania Trump's speech sounded very professional in my notes on Monday night, my notes on the big Donald Trump Jr. keynote said "better check and see that his speech wasn't plagiarized too because it was pretty good."  It turns out that his speechwriter did recycle some of his previously published prose for the speech, which seems incredibly stupid under the circumstances but the Trumps don't seem to think that double checking these things is worth their time.

There were some clunkers in the speech such as his eye-rolling insistence that he and his siblings got their training from people with "doctorates in common sense" and inexplicably spent their childhoods driving tractors. His promise that "we are going to put Americans first, all Americans, not a special class of crony elites at the top of the heap" shows that he's well on the way to achieving the colossal lack of self-awareness that characterizes his father.

Nonetheless,  he is much better at relaying the familiar Donald Trump message by teleprompter than his father is.  He made it clear that the world is going to hell in a handbasket in every possible way because the people in charge of everything are stupid and inept. But instead of the usual Trump asides and verbal tics the speech was coherent and delivered with real passion and energy. Fortunately, hearing that message from a normal speaker shows how banal it actually is when it doesn't come from the man himself.

It's never been more clear that it's the man not the message that's responsible for this phenomenon and it's a relief to know this nightmare isn't likely to be replicated. Unless he somehow wins the presidency (God forbid)  Trumpism will die with The Donald.