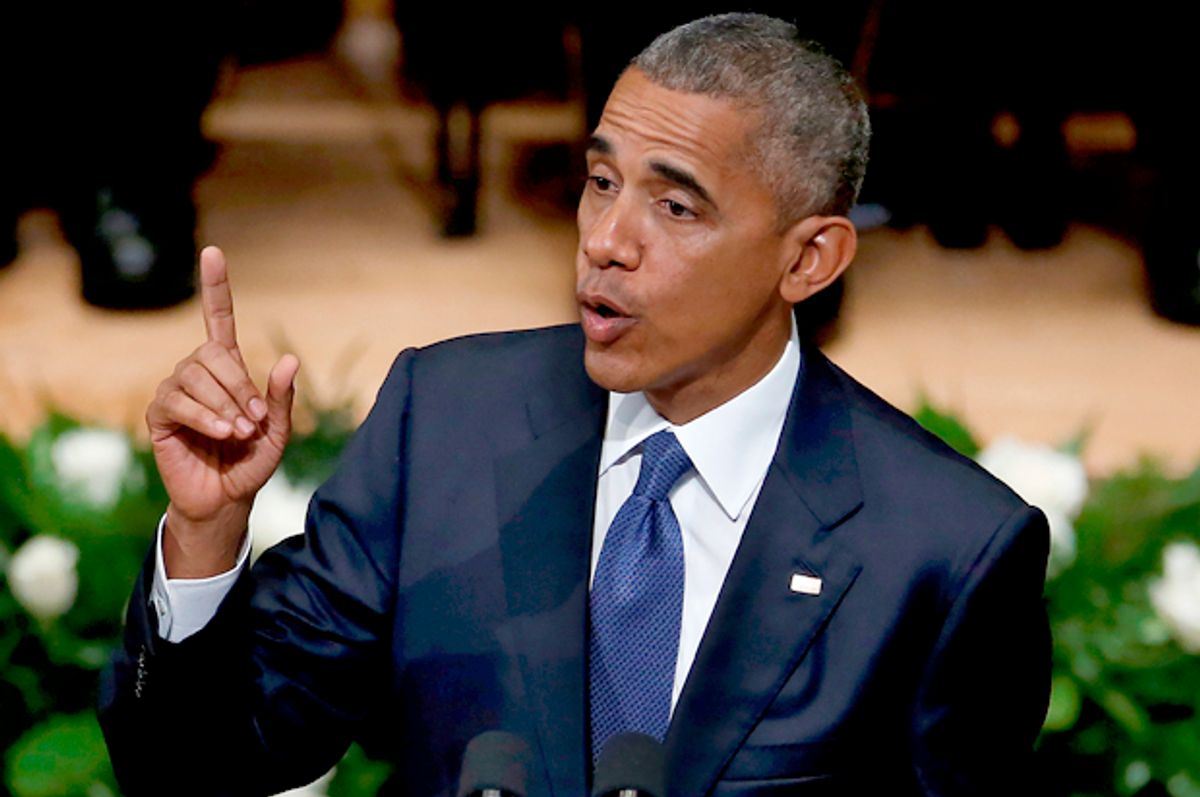 The president of the United States should provide moral clarity and leadership for the country. This responsibility is most important in a time of crisis, insecurity, fear, uncertainty, or worry. The series of recent video recorded police killings of black men and a subsequent attack on a “Black Lives Matter” march in Dallas, which itself left five police dead, sent shock waves across the American public. In response to these tragic events, President Barack Obama gave a series of talks and interviews that were models of maturity, intelligence, heartfelt wisdom, and calm. They would culminate with the president delivering a eulogy for the officers who were slain in Dallas.

Because it was so widely praised, Obama’s eulogy has not been subjected to a large amount of critical scrutiny.

There, Obama summoned facts about how the United States’ legal system discriminates against blacks and Latinos while also being reverential of the good work done by many police officers. He spoke directly about the reality of the color line and persistent racism in the United States. Obama embraced his identity as the United States’ first black president as opposed to a president who just happens to be black. Obama also signaled to how the repeated killings of African-Americans by the country’s police, and the loss of five officers in Dallas, are part of a cycle of violence that must end.

During the Dallas eulogy, President Obama also made the following observation:

We also know what Chief Brown has said is true:  That so much of the tensions between police departments and minority communities that they serve is because we ask the police to do too much and we ask too little of ourselves. As a society, we choose to underinvest in decent schools. We allow poverty to fester so that entire neighborhoods offer no prospect for gainful employment. We refuse to fund drug treatment and mental health programs. We flood communities with so many guns that it is easier for a teenager to buy a Glock than get his hands on a computer or even a book -- and then we tell the police “you’re a social worker, you’re the parent, you’re the teacher, you’re the drug counselor.”  We tell them to keep those neighborhoods in check at all costs, and do so without causing any political blowback or inconvenience.  Don’t make a mistake that might disturb our own peace of mind.  And then we feign surprise when, periodically, the tensions boil over.

This claim is challenging while also being problematic.

It is problematic because Obama’s logic surrenders to an ethical framework and politics which rests up a basic assumption that people who live in poor and working class black and brown neighborhoods should not receive the same level of respect and fair treatment from the police as those who reside in wealthier white communities. Obama’s observation also plays dangerously close to the belief that poor black and brown people who are abused by the country’s police are somehow responsible for their own victimization.

President Obama’s observation is challenging because it is calls attention to how structural class inequality and systemic racism help to create and legitimate the very circumstances in which African-Americans (and Latinos) are subjected to excessive force, violence, and killing by police as compared to whites.

Cities and suburbs in the United States are racially segregated.

Chicago and Milwaukee have such high levels of racial segregation that they are best described as being “hyper-segregated”.

Baton Rouge is the second most racially segregated city in the American South.

Race and class overlap in the United States. Blacks and Latinos are more likely to be of a lower socioeconomic standing than whites and consequently to have diminished life chances. This is a function of racism and classism.

Social scientists have determined that “middle class” and “upper class” black neighborhoods have public services and other metrics that most closely resemble those of poor and working class white neighborhoods.

This is the macro level context for the individual level tragedies seen in such recent cases as the killings of Alton Sterling and Philip Castile in Baton Rouge and Minneapolis.

Racially motivated “pretext stops” (or what is commonly known as “driving while black”) are one of the primary ways that police intimidate and harass African-American (as well as Latino and First Nations) motorists.

Philando Castile was stopped 52 times in 14 years by Minneapolis-area police. Jeronimo Yanez, the police officer who killed Castile, evoked ugly racial stereotypes and caricatures about black people as he somehow was able to see Castile’s “wide set nose,” which in turn meant he “resembled” a robbery suspect.

The Washington Post examined racial profiling and the Castile case and found that:

The Castile video “is pretty horrific,” said Gavin Kearney, who in 2003 co-authored a report to the Minnesota Legislature on racial profiling in the state. “There are things we don’t know about it. But we know there are certain assumptions and biases — whether explicit or implicit — about black men that affect how police officers interpret their actions. And we know white drivers are less likely to be pulled over…No recent information is available on the racial breakdown of drivers stopped or ticketed by police in Falcon Heights, the mostly white suburb where the shooting occurred, or in other Minnesota towns. Minnesota is not among the handful of states that require police to keep such data.

But in 2001, the Legislature asked for a racial profiling study and it fell to Kearney, then at the Institute on Race & Poverty at the University of Minnesota Law School, to conduct it. His study, using information supplied voluntarily by 65 law enforcement jurisdictions in the state, found a strong likelihood that racial and ethnic bias played a role in traffic stop policies and practices. Overall, officers stopped minority drivers at greater rates than whites and searched them at greater rates, but found contraband in those searches at lower rates than whites.

Myron Orfield, the director of the Institute on Metropolitan Opportunity at the University of Minnesota provided some additional context in an interview with The Atlantic:

Indeed, St. Anthony, the city where the police officer Jeronimo Yanez, who shot Philando Castile last week, was on the police force, is a “tightly guarded white enclave” surrounded by more racially diverse communities, Orfield says. St. Anthony has a poverty rate of 5 percent, compared to 11 percent for Falcon Heights, where Castile was pulled over. The nonwhite population of St. Anthony grew from 3 to 16 percent between 1980 and 2010; Falcon Heights’ nonwhite population grew from 11 to 28 percent during that time. Another Minneapolis suburb, Brooklyn Center, saw its nonwhite population grow from 4 to 54 percent over that time period.

Alton Sterling was supplementing his income by selling music CDs outside of a business owned by a friend. Like Eric Garner in New York, Sterling’s need to earn extra income in the “gray economy” is an indicator of how a broken labor market has left many black and brown communities with extremely high rates of both underemployment and unemployment. It is also a signal to how the Great Recession in 2008 devastated the black middle and upper class—a group that has still not recovered under President Barack Obama.

The abuse is so rampant, that during Hurricane Katrina police officers from other states actively complained about the racism they witnessed against black refugees seeking aid and comfort in Baton Rouge.

A particularly heavy shadow of slavery and white supremacy hangs over Baton Rouge as well. It is the site of “Angola” prison, a prison that is notorious for its brutality and violence against inmates, and which was built on one of the largest slavery plantations-slave labor camps in the United States.

Housing and residential segregation, and the police’s role in maintaining it, is one of the key mechanisms for sustaining the extreme amounts of wealth and income inequality that exist across the color line in the United States. These factors also have a severe impact on individuals’ interpersonal networks: 75 percent of white Americans do not have a friend of another racial background.

The sum effect of these dynamics is that too many white Americans are unable to empathize with the human suffering and fear experienced by people of color at the hands (and batons, guns, tasers, and fists) of the country’s police. Unfortunately, many white Americans know that the United States’ legal system is racist and unfair to black people but they continue to support it anyway.

Substantive police reform will involve stopping the many ways that cops in the United States do the work of maintaining a racist and classist social structure. This is not likely to happen because too many people are psychologically, economically, and politically invested in protecting the status quo.