Carson, Trump, and The Devil: Invoking Lucifer makes perfect sense in the GOP's land of make-believe

The GOP crowd ate up Carson's Satan talk whether they believed it or not, much like they cheer for Trump's wall 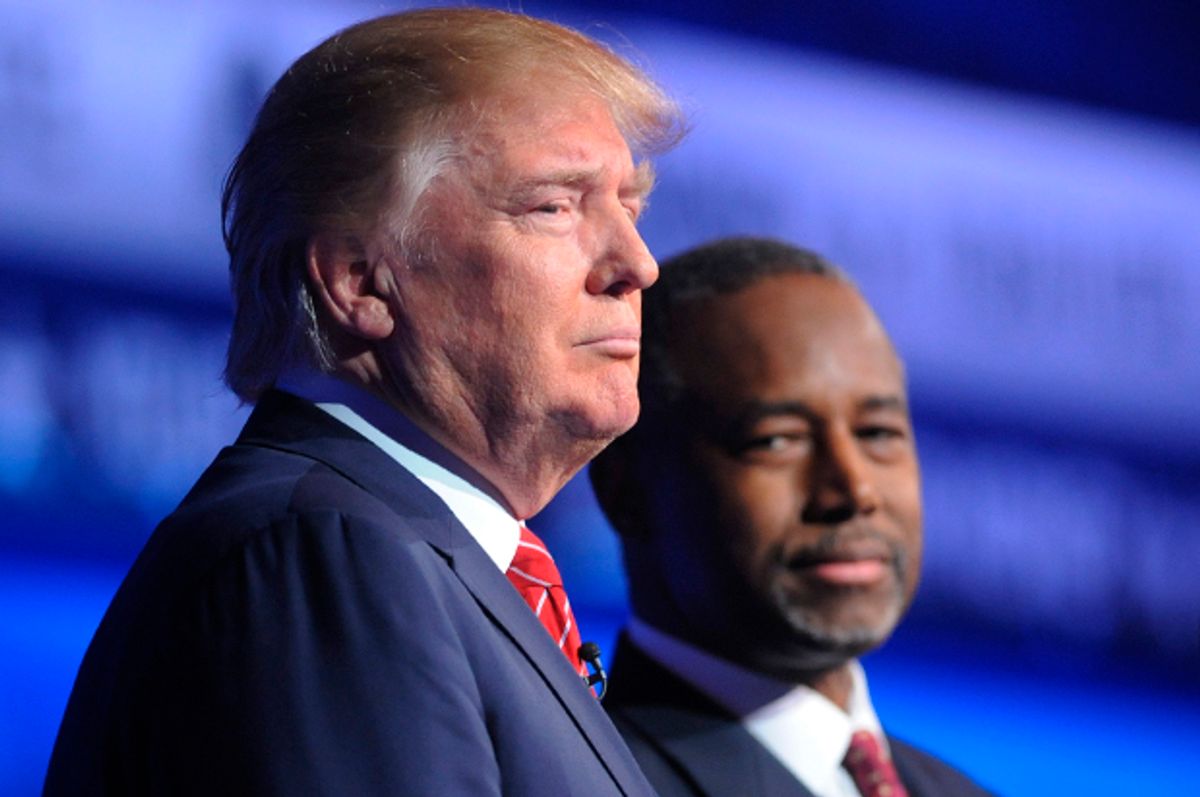 It's beginning to make more sense. I'm beginning to understand how the modern Republican Party, a party that nominated and elected George W. Bush twice and which nearly elected Sarah Palin to be a breath away from the Oval Office, would also nominate a clown-haired reality show celebrity to control the nation's nuclear triad, and, with it, the future of western civilization. The GOP is obviously infatuated with make-believe and those who manufacture it.

By nominating Donald Trump, the Republicans have confirmed their allegiance to superlative grandstanding and a fictitious policy agenda that includes a build a border wall with Mexico which the Mexican government will somehow finance. It'll never happen. Additionally, Trump famously said he wants to deport 12 million undocumented immigrants. This, too, will never happen. He also said he'd ban Muslims from entering the United States. No, this won't happen either, and Trump basically admitted that it won't.

Worse, Trump has sold these fantastical ideas using language that'd sentence normal politicians to the distant fringes of the debate, if not a mental institution. Nevertheless, there are voting-age adults, many of whom have been kicking around the planet for up to eight decades, who believe Trump will make America great again in part because he has "the best words." These "best words" include remarks declaring how Trump's border wall will feature a "big beautiful door." Serious grown-ups with college degrees who've raised kids and grandchildren actually believe this "big beautiful door" will exist. It's worth noting that some of these people are careening down the highway right now in vehicles that are, essentially, 2,000 pound bullets. Some of them will cut you off in traffic today.

Likewise, it's worth noting there are millions of Trump zealots who don't believe anything Trump says, yet they're voting for him anyway. This is almost as bad as the people who believe he has "the best words." Put another way, it's like declaring that hobbits don't exist, but certain voters are willing to support an anti-hobbit platform anyway.

But let's circle back to the Americans who are ebulliently invested in Trump's actual declarations, and who love him for it. It might alarm you to know that a man who's renowned for his skill as a brain surgeon not only believes that Trump will make a great president and, concurrently, will make America great again. This brain surgeon also believes in the literal existence of The Devil.

During the denouement of the Republican National Convention's second day in Cleveland, Dr. Ben Carson delivered his prepared remarks in support of Trump, but ended up deviating from his script in order to elaborate upon the reality of The Devil and how Hillary Clinton is evidently pro-Lucifer. Yes, a one-time frontrunner for the GOP nomination not only believes in The Devil, but he also thinks Hillary is unqualified for president because she's in league with The Devil. Carson, for that matter, also thinks it's possible for humans to have actual associations with this fictitious supervillain from a thousands-of-years-old text, and, all things being equal, this ought to have disqualified Carson from receiving a licence to practice medicine on living humans. Let's just ponder this momentarily: a grown man — and brain surgeon! — announced on prime time television that Lucifer in fact exists and that the Democratic nominee supports his nefarious deeds.

For the record, Carson asked the thinning crowd on the floor of the convention hall, "So are we willing to elect someone as president who has as their role model somebody who acknowledges Lucifer? Think about that." Carson was, of course, referring to "Rules For Radicals" author Saul Alinsky's tongue-in-cheek mention of Lucifer in his acknowledgements. Incidentally, Saul Alinsky could walk up to most of the RNC attendees as a zombie, handing out free cigars, and no one would know who he was. But mention his name — now a popular right-wing shibboleth — and they'll convulsively recite lengthy anti-Alinsky screeds cribbed from Glenn Beck and Alex Jones, both of whom also believe in The Devil, by the way.

Without veering off into a discussion about the veracity of The Bible, there are people of great influence who accept the existence of a red-skinned, cloven-hoofed demon who lives underground in a multi-layered kingdom of pain and suffering, and who controls the Democratic nominee's agenda. Dr. Carson and similarly-minded supporters of Donald Trump happen to not believe in the scientifically verified phenomena of climate crisis and evolution. Indeed, Ben Carson thinks that evolution is also the work of The Devil. Think about that. There's definitely an evil goblin who's the arch-nemesis of a bearded deity who lives in the clouds. This is totally real. But there's no way that greenhouse gases from human activities are causing the Earth's climate to grow hotter. Furthermore, some of the people who believe in The Devil but who don't believe in evolution are also suffering from an outbreak of norovirus at the RNC — a virus that's literally evolved in real time.

The nation barely survived the presidency of George W. Bush, who's wartime policies were dictated in part by his belief in the aforementioned bearded cloud-dweller. Many of the voters who elected Bush twice will be voting for Trump in November in part because they believe Hillary is in cahoots with a cartoon character named "Lucifer." It's nearly impossible to imagine the nightmare of a Trump presidency, but if The Devil actually exists in real life, he probably has a crappy yellow combover, orange skin and "the best words."