Trump is a con man, so it's no surprise that his campaign studded the speaker's list with disreputable people 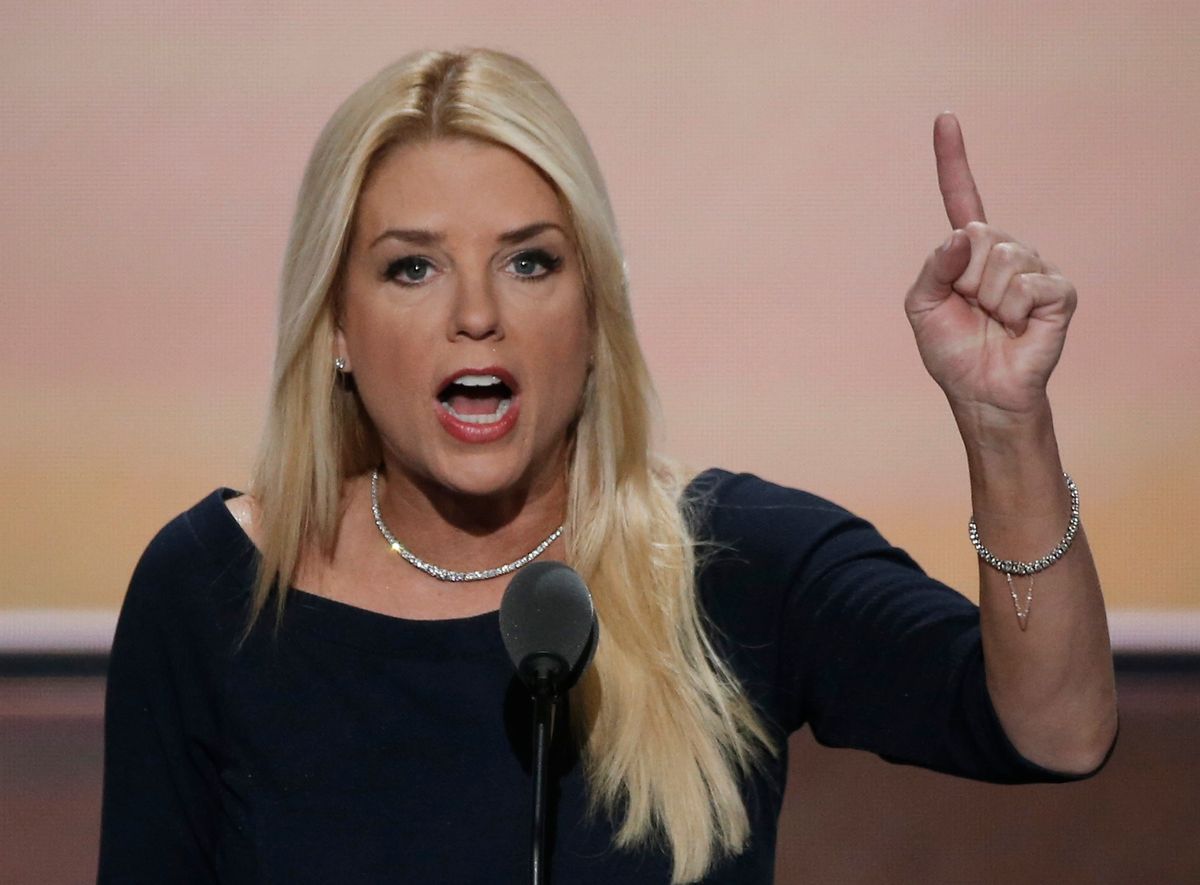 While the second half of Wednesday night's RNC programming was dominated by the usual professional politicians one expects at events like this (and fireworks thanks to Ted Cruz) the earlier parts of the evening were downright puzzling. After Laura Ingraham worked the crowd into an orgasmic frenzy of hate towards both Hillary Clinton and the press, the hard-won energy drained out of the room as the gathered were subject to one frankly weird speech after another.

Phil Ruffin, Pam Bondi, Eileen Collins, and Michelle Van Etten: These speakers ranged from uninspiring to being Ambien in human form. Bondi managed to look alive at parts and Collins confused the audience by talking about government having roles outside of cracking skulls and kicking hippies, but it was Ruffian and Van Etten that truly made no sense from an aesthetic or political perspective.

Ruffin was a trollish man whose speech was so boring that it started to feel like a human rights violation. Van Etten, portrayed as an entrepreneur, was somehow even worse, so bad that the cringe could be felt across Twitter.

Sure, the Trump campaign is scooping from the bottom of the barrel for convention speakers, but was this really the best he could do? The crowd, as evidenced by the ecstatic response they offered Ingraham, was primed and ready to go nuts at the drop of a hat. It took effort to bore and confuse them. So one has to wonder: Why these people? Why not roll out a few more talk radio demagogues like Ingraham, since that's clearly who the crowd wants to see?

Perhaps the reason is that three out of four of these people — more than the pundits, family members or career politicians otherwise populating the stage — represent the true heart and soul of the Trump campaign. With the exception of Collins — who  didn't endorse Trump — and whose presence simply makes no sense at all, what these speakers have in common is a certain affection for the hucksters and grifters of the world.

Ruffin is a casino owner, albeit a more successful one than his buddy, Trump. Bondi ostensibly has a respectable job, as the attorney general of Florida. But she is also in serious political trouble, as it came out months ago that she dropped a lawsuit against Trump University, one Trump's most obnoxious scams, after Trump donated $25,000 to her campaign. And Van Etten is not really an entrepreneur. She's a grifter who made her money running a multilevel marketing scam selling useless vitamin supplements.

Between these three, we get a full eyeball of what Trump means by making America "great" again, which apparently means making America safe for sleazy operators who would rather make their money through grifts and bribery than through a hard day's work.

There's something telling about the Trump campaign's willingness to trot out the kind of bottom-feeders  that most Republican politicians politely pretend are not the backbone of their party. Perhaps it is a sign of unawareness, a demonstration that Trump's people have no idea that there's something unsavory about being unsavory. Or perhaps it's a savvy move, to populate the byways of a respectable institution of the RNC with snake oil salesman, in order to make their candidate seem normal instead of what he is, a lazy reality TV personality who is so bad at business that his various ventures have performed less well than putting his money in basic investment account.

Of course, that is attributing savvy to a campaign so lazy that they allowed Melania Trump, who was supposed to humanize the candidate, go out on stage with a plagiarized speech.

No, the likelier explanation for this roster of embarrassments is that these grifters are just the kind of people Trump likes and the kind of people he wants to roll out as the best and brightest that his campaign has to offer as surrogates.