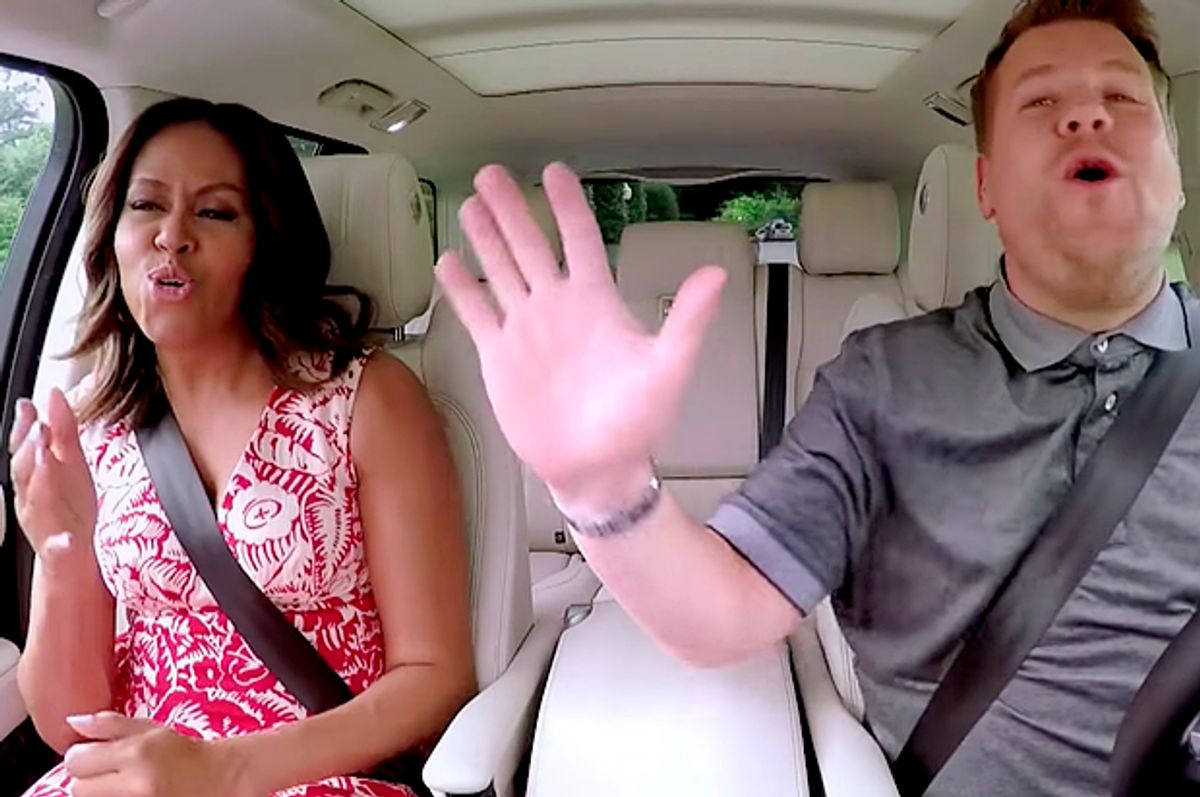 America, you are one hot mess right now and yet still, the gods must somehow favor you. Why else would they have given you Michelle Obama?

Mrs. Obama, who holds the distinction of being the only First Lady of the United States thus far to inspire a Fifth Harmony single, appeared on James Corden's Carpool Karaoke Wednesday night, and, as she does in all things, she killed. And while her husband has spoiled us with eight years of showing how to simultaneously run a country and credibly telling Lin-Manuel Miranda when to drop the beat, it was Michelle's exuberant "Late Late Show" performance that sealed the deal as her status as American Perfection.

Sliding into the front seat in yet another inevitably flawless dress, the former attorney, biceps role model and self-proclaimed "Mom-In-Chief" graciously pointed out the landmarks along the way, telling Corden, "This is the Oval Office. My husband is in there somewhere." She also admitted that she's only been able to "rock out" to tunes in a car one other time in her seven and a half years of her husband's term in office. Before long, she was telling Corden to "Crank it up" and bringing it to Stevie Wonder's "Signed, Sealed, Delivered." She then moved on to proving that she knows both the words and key moves to Beyoncé's "Single Ladies," discussed her Let Girls Learn initiative to educate young women around the world and launched into its empowering theme "This Is For My Girls," and brought along Missy Elliott for the ride.

For the kicker, the trio jammed to Elliott's classic "Get Ur Freak On," including the suddenly-relevant lyric, "So don't copy me." Imagine any other FLOTUS moving Missy Elliott to later declare, "So much fun I had a blast riding with @JKCorden & @FLOTUS in the 'Carpool Karaoke' pick me up next weekend!"

It was as glorious and beautiful as a female reboot of "Ghostbusters."

Michelle Obama has spent her time as First Lady wisely — advocating for better health and fitness for America's kids, for improved services for veterans and their families, and for education. She's done it while raising two children. She's shut down hecklers and endured a near-constant torrent of racist and abusive commentary about her appearance. She is a style icon with a sense of humor. She is also a woman so poised and articulate that her direct opposition has to steal her material just to sound smart.

When I think about the time just six months from now, when this woman is not in the White House, I get so distressed and short of breath that I have to remind myself that there is precedent for a former First Lady securing the nomination for president. But if instead she and Sophie Trudeau ever want to team up with Connie Britton for a new Shonda Rhimes series, I wholeheartedly commit to watching the hell out of that too, because wherever she goes from here, Michelle Obama's made it clear she's the best around.