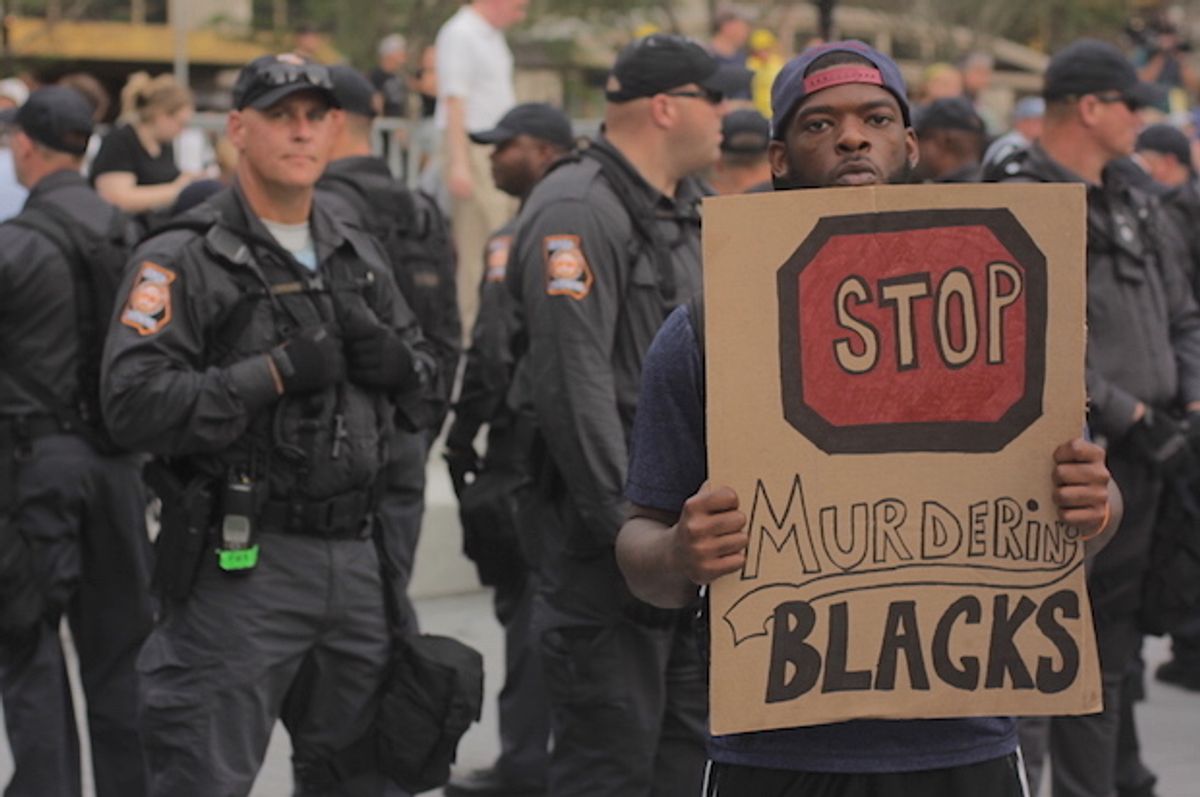 A Black Lives Matter protester outside of the Republican National Convention in Cleveland on Thursday, July 21 (Salon/Ben Norton)
--

Thousands of people from all over the country convened in downtown Cleveland this past week to protest the 2016 Republican National Convention. A huge variety of activists appeared, from anti-racist protesters to migrant justice organizers, from anti-war dissidents to revolutionary socialists.

During these varied demonstrations, a group of Cleveland residents organized a campaign to call out the government for prioritizing the RNC over its own citizens.

They unified their actions under the hashtag #CLEoverRNC. On Thursday night, the activists — many of whom are part of the Black Lives Matter movement — gathered downtown in Public Square, holding up signs that illustrate the ways in which they feel abandoned by their government.

"You lock us in a constant, cyclical state of poverty, and then you murder us," said Samira Malone, a student activist at Cleveland State University.

Malone blasted the RNC, noting, "None of their issues help us."

"Our neighborhoods look like war zones due to economic redlining," she said. "They took money out of our public schools and put it in charter schools, but they're failing."

While millions of people throughout the U.S. live in poverty and struggle to get by, Malone noted that the government spends an enormous share of tax dollars on the military  — more than the countries with the seven largest military budgets combined, to be precise — and some of this fuels the militarization of local police forces.

"We live in a militaristic government, period," Malone stressed. The government spent at least $50 million on police for the RNC, she added "and they're bored — $50 million for them to twiddle their thumbs."

Tyra Sadler, an activist who just graduated from John Carroll University, told Salon the demonstration was not organized by one particular group, although many of the activists are part of the Black Lives Matter movement. Instead, members of the community got together and asked what they could do to speak up.

"The RNC is an inconvenience to the city," Sadler said. "The millions they spent could have been invested in schools, roads and a lot of other things."

Sadler noted that one of the themes of the 2016 RNC was "Make America safe again," yet, she stressed, "Certain ethnic groups and indigenous groups have never been safe."

Several of the protesters cited some of the same structural problems in Cleveland, including failing underfunded schools, abandonment of homes, broken infrastructure, gaping potholes and extreme and growing inequality.

Alice Ragland, a PhD student at Ohio State University, told Salon, "A lot of the city is in really bad condition, but a lot of the tax dollars have gone to the RNC."

"They have not been prioritizing us at all," she added. "They show who is important and who is not important."

"Clearly, the people attending the RNC are more important to them." Earlier in the week, on Monday and Tuesday, CLEoverRNC held teach-ins about the structural inequalities and problems in Cleveland and the U.S. overall. The actions brought together not just students, but also community activists from throughout the city.

India Pierre-Ingram expressed concern that her local government did not prioritize the needs of its residents.

"Cleveland struggles with unemployment, and we're spending so much," Pierre-Ingram told Salon.

"Who benefits?" she asked, noting that it was most definitely not the city's vulnerable, impoverished population.

Pierre-Ingram emphasized, "I support Black Lives Matter and the end to systemic oppression," tying together state violence against black Americans with the defunding of social services and public programs.

Chuck Modiano, another Black Lives Matter supporter and activist who traveled from D.C. to protest the RNC, joined the demonstration.

Modiano spoke of Tamir Rice, the 12-year-old black boy killed by Cleveland police in 2014 in a park mere miles from the site of the RNC, and highlighted the hypocrisies that were evident to him after just a few days in the city.

"In Ohio, an open-carry state, white folks can show their AR-15 assault rifles but Tamir Rice was shot for playing with a toy gun," he said.

While the CLEoverRNC activists were protesting, in a park across the street, white Donald Trump-supporters walked around carrying assault rifles.

More white Trump supporters walking around with assault rifles outside the #RNCinCLE pic.twitter.com/KBlXUwhWkx

During the RNC, another white, right-wing self-described "militia" marched around downtown Cleveland with heavy weapons.

Modiano condemned the impunity virtually guaranteed for police who kill black Americans. "They never get convicted," he stressed.

He also criticized the very heavy police presence and the clampdown on activists. "The police have been intervening in protests. That's one of the reasons they have been smaller. Police forces have cut protests off."

A few feet away, a line of dozens of heavily armed police watched the peaceful Black Lives Matter protesters. A man standing next to them held a sign reading, "Stop murdering Blacks."