Bernie Sanders: "Hillary Clinton must become the next president of the United States —I'm proud to stand by her"

Sanders supporters hoping for a Ted Cruz moment were, no doubt, let down the Vermont Senator's endorsement 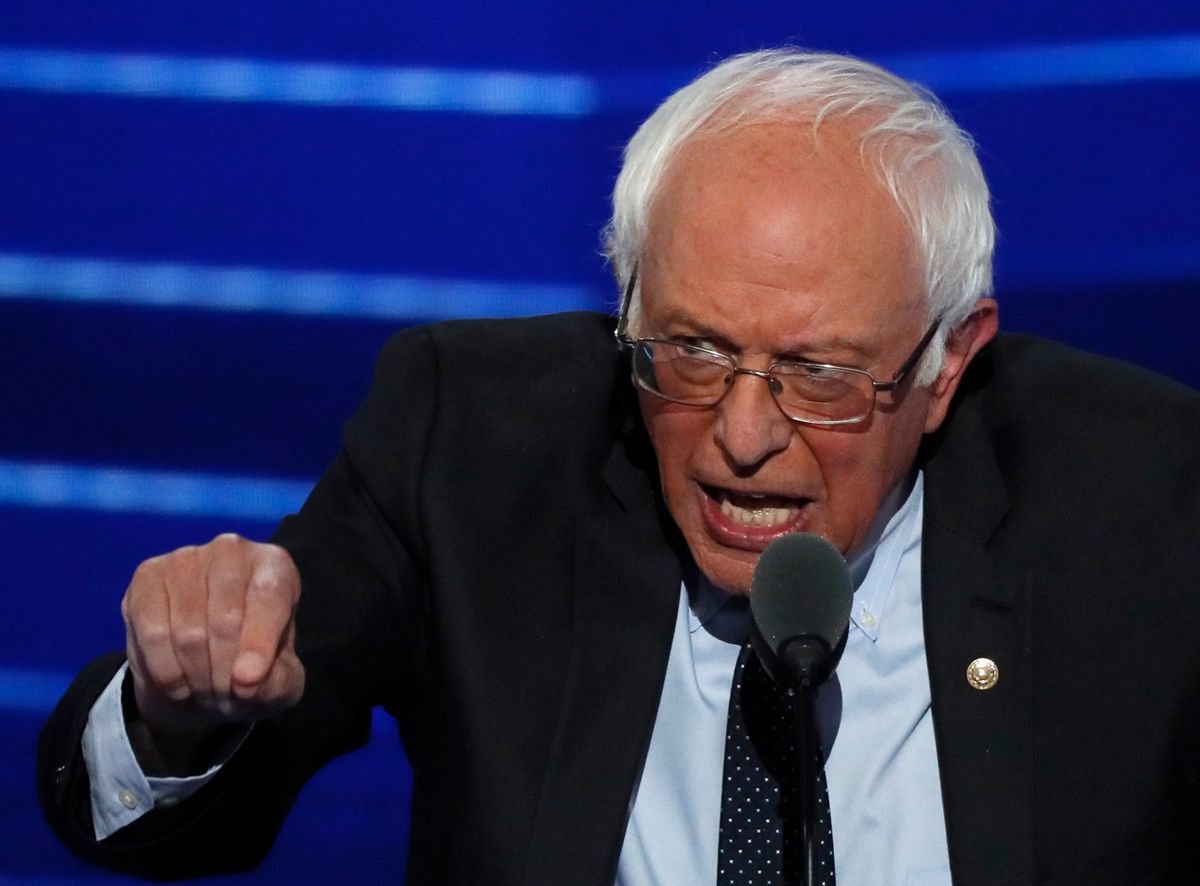 After a day that, to be frank, didn't go well for Vermont Senator Bernie Sanders, and a weekend of revelations that didn't do much either for the DNC or its chosen candidate, a lot more seemed to be riding on the former Democratic hopeful's convention speech than was initially anticipated -- so much so that CNN is reporting that Sanders was still revising it less than an hour before he took the stage.

But once he actually took the stage, his position was clear and endorsement full-throated -- Hillary Clinton is not GOP nominee Donald Trump, no matter how corrupt Sanders' supporters consider her. Sanders also had a series of hard acts to follow, as New Jersey Senator Cory Booker, First Lady Michelle Obama, and Massachusetts Senator Elizabeth Warren all electrified the crowd.

Granted, Sanders had difficulty quieting the crowd at first, as many of his supporters refused to allow him to speak. "Thank you," he said repeatedly, before being allowed to admit that "it is an honor to here tonight and to be following in the footsteps of my friend Elizabeth Warren, and Michelle Obama," as well as "the hundreds of thousands of Americans who actively participated in our campaigns," and "the two and a half million Americans who helped fund our campaign with eight million individual contributions."

He thanked the delegates pledged to him, saying "I look forward to your votes during the roll call tomorrow night."

"I understand that many people here in this convention hall and around the country are disappointed in the results of the nomination process," Sanders said. "But to all of our supporters, I hope you take enormous pride in the historical accomplishments we achieved. Together, we have begun a political revolution to transform America, and that revolution -- our revolution -- continues."

"But the struggle of the people to create a government which represents all of us and not just the 1 percent – a government based on the principles of economic, social, racial and environmental justice – that struggle continues. And I look forward to being part of that struggle with you."

Sanders insisted that the election is "not about what the media spends so much time discussing. This election is about – and must be about – the needs of the American people and the kind of future we create for our children and grandchildren." He continued, saying this "election is about ending the grotesque level of income and wealth inequality that we currently experience, the worst it has been since 1928. It is not moral, not acceptable and not sustainable that the top one-tenth of one percent now own almost as much wealth as the bottom 90 percent, or that the top 1 percent in recent years has earned 85 percent of all new income."

"By these measures," Sanders said, "any objective observer will conclude that – based on her ideas and her leadership – Hillary Clinton must become the next president of the United States. The choice is not even close."

"Our job now is to see that platform implemented by a Democratic Senate, a Democratic House and a Hillary Clinton presidency – and I am going to do everything I can to make that happen," Sanders concluded.

"I have known Hillary Clinton for 25 years. I remember her as a great first lady who broke precedent in terms of the role that a first lady was supposed to play as she helped lead the fight for universal health care. I served with her in the United States Senate and know her as a fierce advocate for the rights of children. Hillary Clinton will make an outstanding president and I am proud to stand with her here tonight."