Myth: Trump is an ally to the LGBT community. Fact: He has vowed to enact a platform that will set us back decades 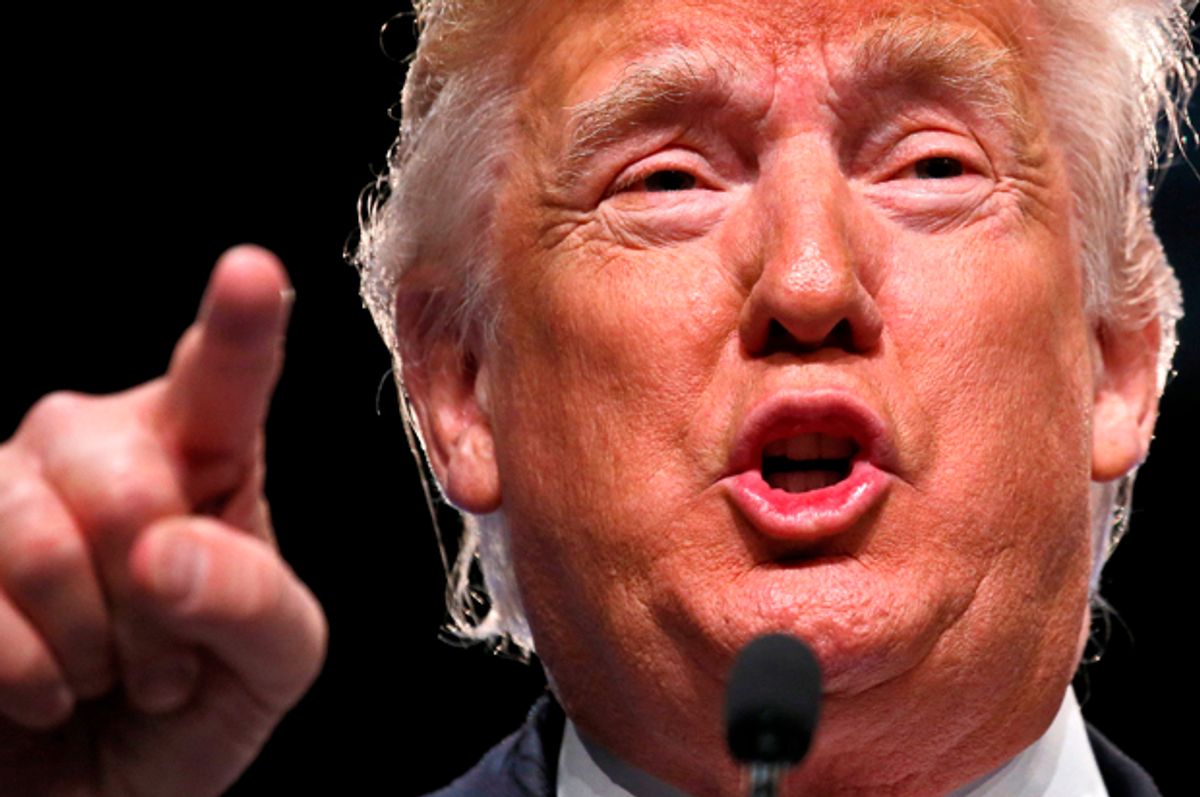 Gregory T. Angelo, president of the Log Cabin Republicans, believes he can. In 2012, an estimated 31 percent of queer and transgender voters cast a ballot for Mitt Romney, who did little to court the LGBT community during his presidential run. Richard Grenell, a gay Republican who served as the national security and foreign policy spokesman for Romney’s campaign, was forced to step down from his position following a backlash about his sexual orientation. After initially refusing to do so, Romney  signed a “Marriage Vow” to oppose same-sex unions in August 2012.

Given that Romney still finished with nearly a third of LGBT votes, Angelo thinks Trump could go even further. “I think there's an opportunity, especially given the explicit outreach Donald Trump has made to the LGBTQ community," he told the Washington Examiner.

In stark contrast to Romney, Trump has  marketed himself as a “friend” the LGBT community, claiming he would do more to prevent future attacks like those on Pulse nightclub than Hillary Clinton. At the RNC, Trump addressed the attack head-on. “Only weeks ago in Orlando, Florida, 49 wonderful Americans were savagely murdered by terrorists,” he said. “As your president I will do everything in my power to protect LGBTQ citizens.” (This is despite the fact that the Pulse shooter, although he claimed allegiance to ISIS, reportedly didn’t know the difference between the militant Islamic group and Hezbollah.)

Lynne Patton, the vice president of the Eric Trump Foundation, affirmed the elder Trump’s support for the community in a speech at the RNC. Patton said that Trump “knows LGBTQ lives matter.”

It’s worth asking, however: When do the lives of LGBT people matter to Donald Trump? His support for LGBT protections appear to extend solely to terrorist attacks. Take heart: If you, as a queer person, should be targeted by ISIS, Trump is on your side. But that’s about it. Should you want to be able to marry your partner, patronize a business without being openly discriminated against, be out at work without the fear of losing your job, adopt children, get HIV medication, or escape the horror of conversion therapy as a minor, Trump represents a profound threat to your basic human rights.

Jim Obergefell, the plaintiff in Obergefell v. Hodges, the landmark 2015 Supreme Court case that legalized same-sex unions in all 50 states, called out Trump’s platform for what it is—hollow pandering. In a recent C-SPAN interview, he told the network that Trump would do little to uphold his marriage rights. “He is not a supporter of the LGBTQ community,” Obergefell said. “He is not our friend in any way, shape or form.”

Obergefell, a realtor and IT consultant, fought for years to overturn his state’s prohibition on same-sex marriage. In 2004, Ohio was one of 11 states that passed constitutional amendments restricting the definition of marriage to a union between one man and one woman. In 2013, Obergefell wed John Arthur in Maryland—on the tarmac of the Baltimore Washington International Airport—but the couple’s home city of Cincinnati wouldn’t recognize their marriage.

Arthur, who had been diagnosed with ALS two years earlier, passed away just months after the wedding. It was the culmination of a 21-year relationship.

Trump, if elected to the Oval Office, has stated that he would “strongly consider” appointing Supreme Court judges who will ensure that marriage equality is overturned. “I disagree with the court in that it should have been a states’ rights issue,” Trump told Fox News.

Last week, the Republican National Committee strengthened its own opposition to same-sex unions—putting language into its platform that recalled the very constitutional amendment which kept Jim Obergefell and John Arthur from having their marriage recognized. “Traditional marriage and family, based on marriage between one man and one woman, is the foundation for a free society and has for millennia been entrusted with rearing children and instilling cultural values,” the official GOP platform now states.

Despite speculation the party would move to the center on social issues, the Republicans took a hard turn to the right in Cleveland. In last week’s deliberations, GOP delegates took a stand against every modicum of progress for LGBT people, a platform Trump has vowed to uphold in office.

The party platform, as passed, now explicitly condemns same-sex households. “Children raised in a two-parent household tend to be physically and emotionally healthier, more likely to do well in school, less likely to use drugs and alcohol, engage in crime or become pregnant outside of marriage,” it reads.

In addition, the GOP formally came out against the Obama administration’s stance on bathroom access for transgender students.

This May, the federal government offered its official guidance to K-12 schools on providing affirming resources to trans youth; this includes allowing them to use the restroom that most closely corresponds with their gender identity. This policy is based on the administration’s interpretation of Title IX of the Education Amendment of 1972, which prohibits discrimination in schools on the basis of race and sex. In 2014, Obama administration issued a memo arguing that those rights also extended to gender identity.

In response, the GOP platform stated that the administration’s interpretation of Title IX is “illegal [and] dangerous.”

“That... provision of law is now being used by bureaucrats—and by the current President of the United States—to impose a social and cultural revolution upon the American people by wrongly redefining sex discrimination to include sexual orientation or other categories,” it reads. “Their agenda has nothing to do with individual rights; it has everything to do with power. They are determined to reshape our schools—and our entire society—to fit the mold of an ideology alien to America’s history and traditions.”

Although LGBT supporters might claim that Trump does not share the beliefs of his party, the billionaire businessman has repeatedly walked back his stated support of affirming trans bathroom access. After North Carolina passed House Bill 2, a controversial law that prohibited trans people from using the restroom that corresponds with their gender identity, he decried the legislation.

“There has been so little trouble,” Trump told Matt Lauer in May.

He notably flip-flopped on that stance the very same day, later saying that it should be a states’ rights issue, before  coming out in support of Gov. Pat McCrory, the governor who pushed through the legislation, during a July rally. “I’m going with the state,” Trump told supporters in Raleigh, N.C.. “The state, they know what’s going on, they see what’s happening and generally speaking I’m with the state on things like this. I’ve spoken with your governor, I’ve spoken with a lot of people, and I’m going with the state.”

The platform also supports conversion therapy, which attempts to “cure” queer youth of their same-sex attractions. The practice has been denounced by every leading psychological association.

Conversion therapy was, however, notably heralded by his running mate, Indiana Gov. Mike Pence, when running for Congress in 2000. Pence’s campaign website boasted that if elected to the House of Representatives, he would do everything in his power to redirect funds from the Ryan White Care Act, a federal program for HIV funding, to “those institutions which provide assistance to those seeking to change their sexual behavior.”

The Ryan White Care Act, which was enacted in 1990, provides life-saving relief services for low-income people with HIV, who might not otherwise be able to afford their daily meds. Pence’s proposal would have jeopardized 624,000 lives every year, which is the estimated number of people who rely on the program for survival. According to the Health Resources and Services Administration website, that number amounts to 52 percent of all people with HIV in the United States.

Although vice presidents are often viewed as figureheads, Donald Trump is allegedly planning to give Pence unprecedented power in his position. The New York Times reported that when the Trump campaign approached John Kasich in May about being his running mate, Kasich was all but handed the keys to the city. According to the Times, Donald Jr. asked the self-proclaimed moderate: “Did he have any interest in being the most powerful vice president in history?” The outlet adds, “When Kasich’s adviser asked how this would be the case, Donald Jr. explained that his father’s vice president would be in charge of domestic and foreign policy.”

If, as vice president, Pence were in control of domestic policy, that’d spell more bad news for the LGBT community. During his time in Congress, Pence voted against hate crime legislation that would include gender identity and sexual orientation as protected classes, as well as the Employment Non-Discrimination Act (ENDA), which would prohibit workers from being fired for being LGBT. Although marriage equality is legal—for now, at least—you can be let go for having a photo of your legally wedded same-sex partner on your desk in 30 states. This includes Texas, Ohio, which Jim Obergefell and John Arthur called home, and Indiana, Pence’s home state.

Most famously, however, Pence pushed through the Religious Freedom Restoration Act (RFRA) during his time as governor. The so-called “religious liberty” bill allowed companies to refuse business to clientele based on the “sincerely held religious beliefs” of the proprietors. This means that a catering company could decline to service to a lesbian wedding or a restaurant could tell a transgender patron to eat somewhere else.

After mounting public pressure, Pence would amend the law, but not before it did enormous damage to Indiana’s economy—to the tune of $60 million in potential revenue. Twenty-one other states have similar legislation on the books.

When Jim Obergefell claimed that Donald Trump is no friend to the LGBT community, he was perhaps putting it lightly. In the past decade, queer and transgender Americans have made enormous gains across the board, winning unprecedented victories and making major strides in our march toward equality. A Trump presidency would serve as a severe setback, rolling back years of progress and jeopardizing thousands of LGBT lives every single year. The GOP nominee might say he has our back when it comes to terrorist attacks, but who will save us from the terror of Donald Trump?