Don't give in to Trump Trutherism: Yes, his trollery hits new lows, but that doesn’t make him a Russian agent 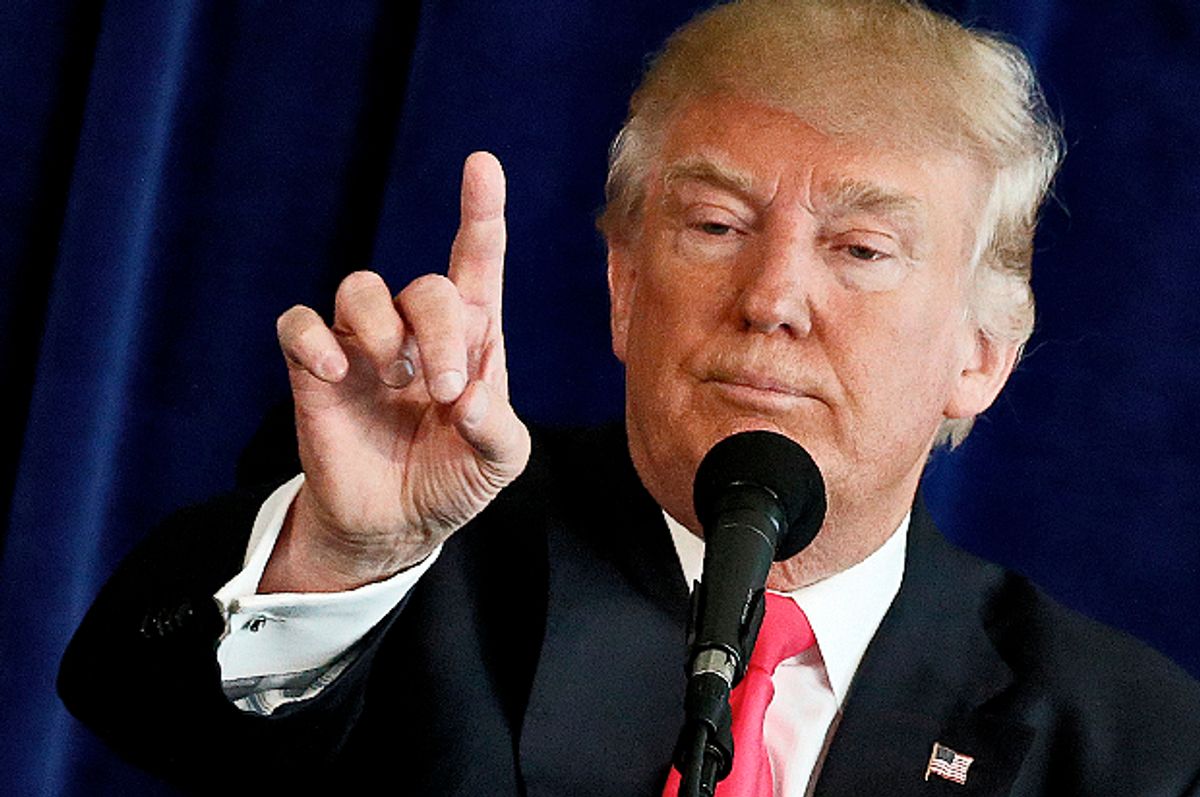 For many months the media was undeniably guilty of not taking Donald Trump seriously, as with the Huffington Post’s ill-fated attempt to cover his campaign in the entertainment section. Those were the days! Now we may have fallen out of the boat in the other direction: We’re taking Trump too seriously, or at least behaving as if he were an actual adult who means what he says, and vice versa.

Trump’s outrageous callout to Russia at his already legendary press conference in Florida on Wednesday — “I hope you can find the 30,000 emails that are missing!” — has been spun in many different ways in just a few hours. Newt Gingrich says it was a joke. The New York Times soberly pronounced it “an extraordinary encouragement of a foreign power’s cyberespionage,” which feels about halfway between an overly literal-minded interpretation and tumbling into the troll-hole. Social media users have debated whether Trump committed some kind of crime, possibly treason. (The answer is no.) One Twitter user assured me that “Trump just spoke of conspiring with Putin to steal the election,” a reading that, at best, requires multiple leaps across vast gulfs of logic.

Over the course of the last week, we have seen the rapid spread of Trump trutherism among the normally cautious mainstream left, and it has now reached fever pitch. No one should say with any confidence that there is no fire beneath all the smoke, but this feels to me like an effort to explain away the otherwise inexplicable Trump phenomenon, or wall it off. Oh, he’s a Russian agent, or a “Siberian candidate,” in the words of Paul Krugman (sounding way too much like alt-right conspiracy maven Alex Jones). Problem solved! More cynically, it might also be an attempt to fling some mud that will actually stick to Trump and make him look bad to conservative voters, since he has proven impervious to all facts and all reason.

Trump trutherism also serves to distract attention from the hacked Democratic National Committee documents released by WikiLeaks last week, which made clear that the party bureaucracy favored Hillary Clinton over Bernie Sanders. I’m still inclined to believe that Clinton won the nomination in a fair fight, or let’s say fair-ish. She got a lot more votes, under rules that were known in advance. But political analyst Nomiki Konst, who is deeply steeped in Democratic Party machinery, suggested last week that the party’s superdelegate rules, in combination with the DNC’s obvious pro-Clinton tilt, distorted the race on a psychological level that’s impossible to gauge. Sanders started the race behind by 400 delegates, and even sympathetic observers (like me) constantly assured the public he couldn’t win.

So the DNC apologized to the Sanders campaign and Debbie Wasserman Schultz fell on her sword — but look over there, the Russians are coming! If it really was Russian hackers who extracted those documents, and if WikiLeaks founder Julian Assange was pursuing his own anti-Clinton agenda — and both of those things seem likely — does that somehow mean that the scandal wasn’t a scandal, the Democratic Party wasn’t in the tank for Hillary, and Sanders supporters who get angry are serving the ends of a foreign dictator? Every political candidate and political party strives to distort reality to suit its needs, and the Clinton distortions are a lot subtler than the Trump distortions. All the same, I can’t shake the feeling this week that the question of who is being played by whom is more complicated than it appears. (How long until we get “Debbie Wasserman Schultz: Hero and Patriot”?)

Creeping Trump trutherism may seem more morally defensible than the various conspiracy theories Trump himself has promoted — an elevated level of paranoia in the service of the greater good, or something like that. But it’s not necessarily any more helpful, or any more true. Trump’s suggestion that the Russians should hack and/or release Hillary Clinton’s supposedly missing emails (and he didn’t quite say which) was without question reckless and irresponsible, not to mention something no respectable mainstream presidential candidate would ever say. So what else is new? Seriously, people — have we learned nothing? The sun rises in the east, Thursday comes after Wednesday and Donald Trump is a blustering buffoon who utters half-baked brain-farts and leaves others to deal with the smell. He may have gotten himself in trouble this time around, but we’ve said that many times before and it’s never been true.

Ask yourself this question, first of all: If Trump were actually conspiring with Vladimir Putin to bring down Hillary Clinton — and I don’t dispute that they share a common interest in that regard — why in God’s name would he tell us that? Second and perhaps more important, is there anything about the guy that suggests he is capable of playing out an elaborate international conspiracy out of a Jason Bourne knockoff thriller?

As Putin biographer Masha Gessen wrote this week in the New York Review of Books (before the Wednesday press conference), Trump is “uninterested in anything he doesn’t understand” and “incapable of strategic planning.” Or as Tony Schwartz, who ghost-wrote Trump’s book “The Art of the Deal,” told Jane Mayer of the New Yorker, “He has no attention span … it’s impossible to keep him focused on any topic, other than his own self-aggrandizement, for more than a few minutes.”

If there’s one quality that would be required of a “Siberian candidate,” meaning a foreign stooge implanted in the American body politic, it would be an ability to stay on message and follow instructions. Which is precisely what Trump cannot do and has never done, and is also precisely what makes him so uncontrollable and so difficult to combat. Saying ridiculous things to see what will happen — to find out whether the resulting furor helps or hurts him — is the Trump brand and the Trump methodology. This is the guy who has proposed banning Muslims from entering the country and wants to build a 25-foot wall (sometimes a 55-foot wall) the entire length of the southern border. Hoping out loud that a foreign government will dump a load of harmful data all over his opponent is not inherently stupider than those so-called ideas.

As the official nominee of the soulless husk of the Republican Party, Trump evidently crossed some kind of line on Wednesday. Mike Pence and Paul Ryan visibly spent the day pinching themselves and hoping they would wake up in the real world. Maybe this controversy will hurt Trump, if he can be hurt. But his supporters are not as dumb as they look. They understand that Trump’s great genius lies in fucking with people — I’m sorry, but no other phrase will do — and it’s exactly what they like about him. Truth? Lies? Politically unacceptable? None of that matters. Once again he has sucked up all the oxygen in the room and caused the media and political elites to run around in panicked circles, like the denizens of an anthill destroyed by a small boy.

Pretending that Trump might be some kind of Putin superspy, as Masha Gessen suggests, allows us to avoid confronting the fact that he is an American phenomenon, reflecting many of the most unsavory aspects of our society back at us. Trump is less like the faceless apparatchik in the Kremlin, she suggests, than like Mussolini or Hitler, “fascist demagogues who emerged from their own cultures and catered to them.” If Trump is to be defeated, it will have to happen through normal politics and because he is an ignorant bully and a menace to democracy with no qualifications for the office he seeks. We don’t get a do-over or a short cut or a Johnnie Cochran deus ex machina. Trump may dream of being a dictator, but he’s nobody’s fool except ours.