A story of dueling racial optics: The Democratic versus Republican national conventions

The conventions proved yet again that the GOP is focused on luring white voters, while Dems open their arms to all 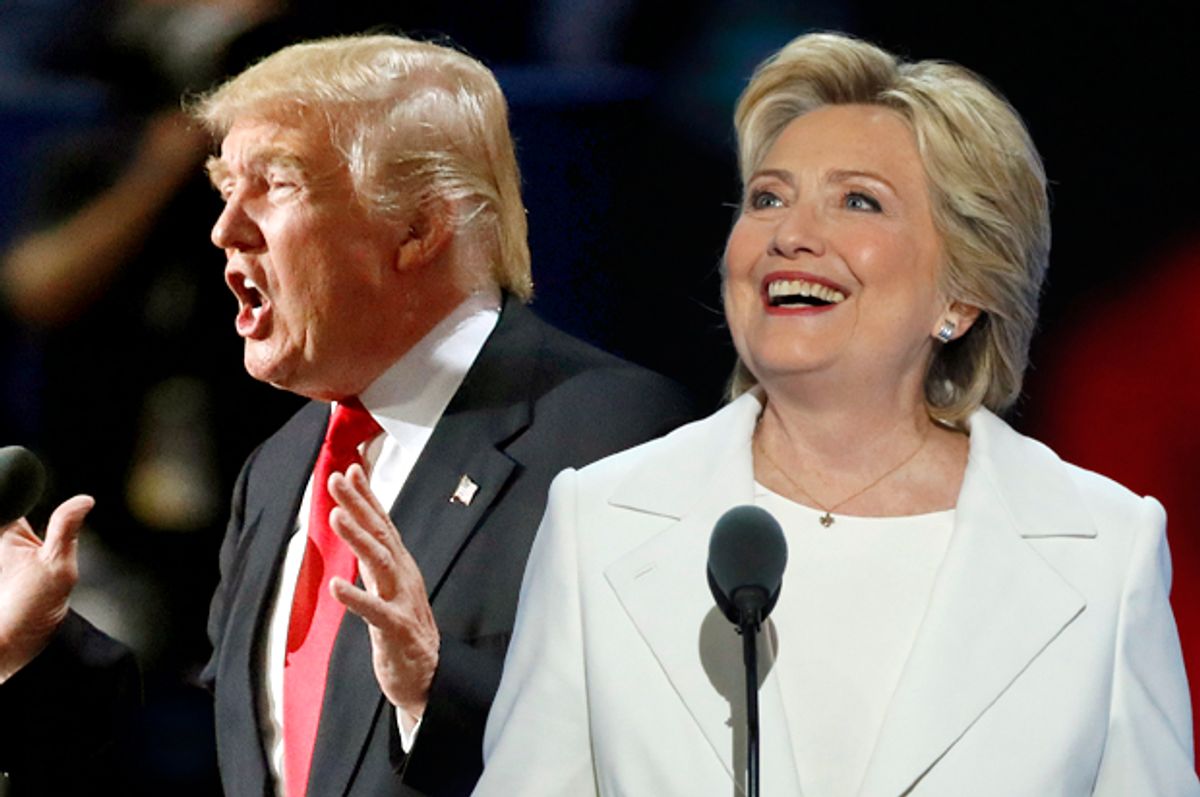 In the United States, the Democratic and Republican National Conventions are opportunities to show off their respective presidential candidates, win new supporters, and for political insiders to negotiate and cement alliances while also earning new favors. Political conventions are also an exercise in marketing and branding. This is especially true in the era of the 24/7 news cycle and the near instantaneous communication provided by the internet and social media.

Hillary Clinton’s campaign told Fusion that 2,887 of this year’s 4,766 DNC delegates are women. Black men and women account for 1,182 delegates (compared to 18 at the RNC) while 292 are Asian American, 747 are Latinos, 147 Native Americans, and 633 are LGBTQ-identified people.

Fusion describes how on the opening night of the Democratic National Convention meeting that:

There were 18 black speakers last night. (Coincidentally, that’s exactly as many black delegates at the RNC — total.) Twelve of Monday night’s speakers were Latino.

Of the 71 prime-time speakers who are expected to take the podium over the course of the four-day convention here, more than 80 percent are white, according to a POLITICO analysis. Perhaps most striking, only seven of the speakers are black and just three are Latino. Women compose one-third of the speaking slots.

But racial optics do not tell the whole story.

The Republican Party is the United States’ largest white identity organization while the Democratic Party’s base is multiracial and diverse. This is reflected by the racial demographics at their respective events.

The individuals who are invited to a political convention are loyalists who are dedicated to their respective party and chosen candidate. These are the true believers. This holds regardless of their respective racial or ethnic background. It is especially true of the invited guest speakers.

Racial optics influence how guest speakers are used to communicate a political party’s message both to the attendees at the convention, and most importantly to the millions of people watching on television at home.

The themes of the 2016 Republican National Convention were hatred, fear, racism, terror, insecurity, bigotry, nativism, and an America that is imperiled from enemies both at home and abroad. The proto-fascist Donald Trump is the perfect messenger for such a dystopian vision. Black and brown conservatives are Trump’s heralds and human puppets. This is their designated role in the post-civil rights era and especially that of Fox News: political mercenaries who give voice and supposed legitimacy to the most racist and extreme policies of movement conservatism and the Republican Party.

Darling of right-wing media, Milwaukee County Sherriff David Clarke assailed the Black Lives Matter movement, furthered the lie that there is a “war on America’s police,” and pandered to white conservatives’ fears of “black crime” and “law and order.”

Jamiel Shaw told a horrific story about how his son was killed in a racially motivated attack by a gang member who was also an “illegal alien” from Mexico. So tragic this event was, it drove Mr. Shaw to a state of cognitive disconnect and grief where he actually said during his speech that, Donald Trump was “sent by God” to stop illegal aliens and to protect the United States.

Trump wants to build a wall to keep out the supposed herds of Mexican immigrants who come to America with the goal of raping white women and slitting the throats of (white) Americans. Shaw’s tragedy is a reminder that this brown menace from below the border knows no limits. It preys on black people as well.

Pastor Mark Burns delivered a benediction in the vernacular tradition of the black church — although, in this case, Burns lacked “prophetic fire” and most certainly did not “speak truth to power” — that praised the “Christian” greatness of Donald Trump and asked God to smite Hillary Clinton and the Democratic Party.

Somnolent black brain surgeon Ben Carson used his time behind the microphone to recycle tired talking points about the evils of Hillary Clinton — but added a new innovation by suggesting that she is in league with Lucifer.

The people of color who spoke at the 2016 Democratic National Convention have a different challenge and role. In a country where the color line has a profound influence on politics and national memory, they had to demonstrate that black and brown folks believe in the American Dream, are living proof of American Exceptionalism, and that the best of the country’s potential and democratic values are exemplified by its racial diversity and modern pluralistic creed.

To that end, an 11-year-old named Karla Ortiz shared her story of striving and dreaming about her future while being worried about her parents and other relatives who were undocumented citizens. Ortiz is lucky to be an American citizen. Her parents and other kin and neighbors share her belief in the American dream, but because of particulars of the law live in fear of being sent away from their adopted homeland.

Corey Booker, former mayor of Newark, and now senator of New Jersey, gave a soaring speech about American progress and how we should listen to our better angels and support each other instead of surrendering to the fear, bigotry, and despotism embodied by Donald Trump and his minions.

First Lady Michelle Obama was vulnerable, strong, and graceful as she reflected on her experience living in the White House--a building built with the blood, sweat, tears and lives of African-American human property--and what it meant to her and the Obama family. She offered a vision of America that eviscerated Donald Trump and the Republican Party’s meanness, vitriol, and race-baiting without mentioning him once by name.

The United States’ first black president Barack Obama connected Hillary Clinton to a long tradition of liberal politics and presented her as his rightful heir to the Oval Office. Obama was hopeful, positive, and gave his symbolic power as a black man who shattered a ceiling imposed by the color line to Hillary Clinton, a woman who will march forward into history as another “first” to win the White House as she (hopefully) breaks a barrier imposed by sexism.

These black and brown voices of endorsement at the 2016 Democratic National Convention were balanced by critical voices too, people who exemplify all the work that remains if American society is to be fully free and inclusive on both sides of the color line.

These voices included nine members of The Mothers of the Movement — in this instance, black women whose children’s names include id, victims of America’s out of control, racist and classist law enforcement culture. Black Lives Matters protesters marched outside in the streets of Philadelphia, demanding substantive reform and that the human rights of all people are respected equally by the country’s legal system. Together, both were reminders of the awkward, problematic, and complicated relationship that Hillary and Bill Clinton have to the decades-long the War on Drugs and the mass incarceration of black and brown people.

Politics has been described as a tent or a seat at a table.

The Democratic Party is a big tent whose electoral success depends on being as racially inclusive as possible. In contrast, the Republican Party, as a white identity organization, is by definition a small tent that tries to win elections by attracting as many white voters as possible.

The Democratic Party provides a big table with many seats. It particularly enjoys having black and brown Americans over as guests—on two occasions it even let one of them sit at the head of the table. But those same black and brown folks who have been offered seats at the Democratic table also know that they should shower the hosts with praise (even it is not deserved), had best not ask for seconds, and offering a suggestion about the flavor and preparation of the meal is usually not responded to kindly.

But for most people of color such an arrangement is far more preferable than a seat at the Republican table. The Republicans may be enthusiastic at the thought of having a black or brown person dining with them. However, at some point they will ask them to serve poison to the other guests. Most people of conscience would say “no” to such a request. Unfortunately, there are black and brown conservatives (and women and gays and lesbians as well) who eagerly say “yes,” their only question being, “how much will you pay me to do so?”