Allison Janney opens up: On being “fragile but tough on the outside” and the questionable things she’s done for love

Salon talks to the "Talullah" star about reuniting with Ellen Page, using insecurity in her art and ambivalent moms 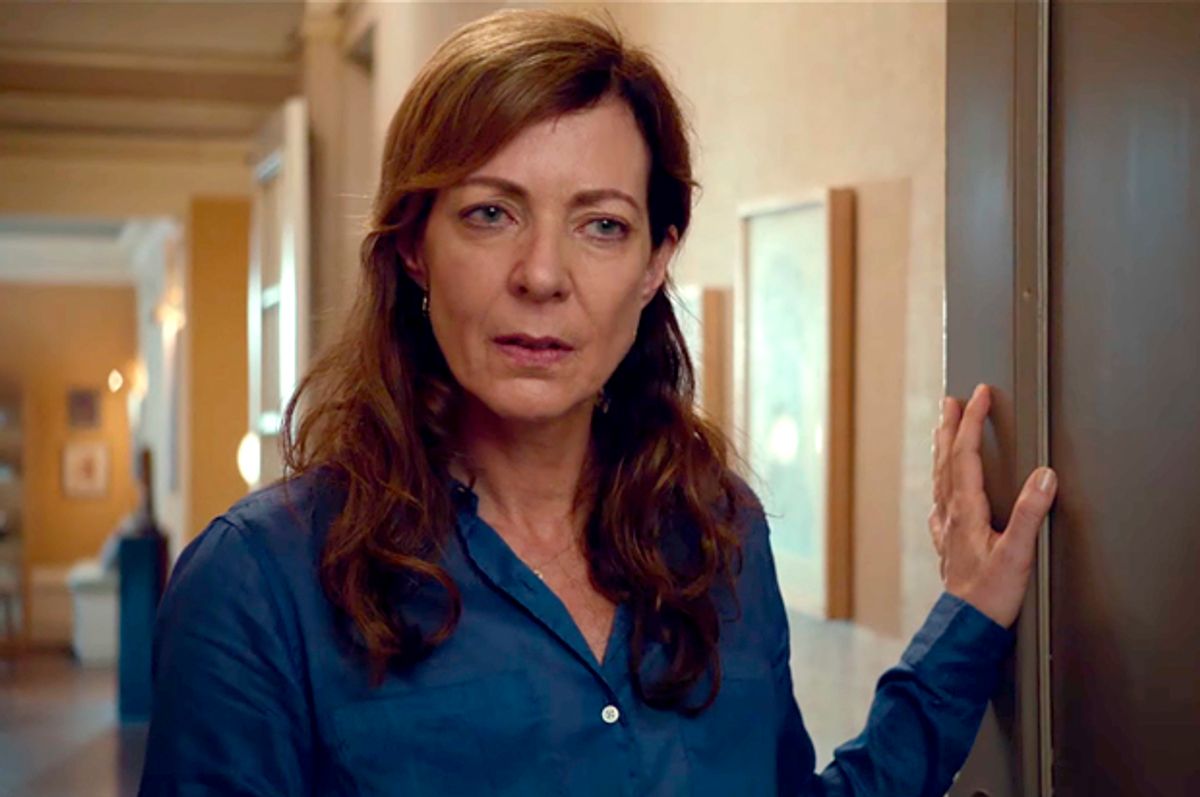 As Margo, in “Tallulah,” Allison Janney is adrift in her life, hiding out in an apartment she is not supposed to have. Margo is a marriage expert whose husband (John Benjamin Hickey) has left her for another man (Zachary Quinto).

She also has not seen her son Nico (Evan Jonigkeit) in several years. Then Nico’s girlfriend Tallulah (Ellen Page) shows up, broke and with a baby — allegedly Margo’s grandchild — needing a place to stay.

Unbeknownst to Margo, Tallulah has made a wrong-headed decision to do what she thought was the right thing, and has kidnapped an infant from Carolyn (Tammy Blanchard). As Margo helps Tallulah with her situation, Tallulah helps Margo find her value in life.

Writer/director Sian Heder’s (“Orange Is the New Black”) feature debut reunites Janney and Page almost a decade after they played mother and daughter in “Juno.” The film is a fascinating character study of these very different, very troubled women, and Janney’s performance in particular is outstanding. Margo allows the great character actress to play both steely and vulnerable — often in a single scene, as when she tries to seduce her apartment building’s doorman (Felix Solis).

Janney chatted with Salon about playing women who are awkwardly comic, intimidating or have control issues.

Margo is a character who is frustrated with her life. How did you connect to and express her tension and anxiety?

I was very struck by the film’s metaphor of gravity disappearing and whether or not you decide to hold on or let go. I was struck by Margo’s character wanting to let go in the beginning. She’s at an impasse. Her connectivity to the world is gone. Her family is shattered and she has no control over it. I’ve felt that — where I’ve wanted to let go — both as an actress and as a human. I have moments when I just can’t deal with it and I want to go and run away.

Through her experience with Tallulah and the baby, she’s found a new reason to stay. As an actress, I wanted to show that arc. I thought it was beautiful. I had an image of a friend going through a divorce and I was struck by her bed: where her husband use to sleep were her books. When I met with Sian, we put that in the movie. I think the humanity of Margo really resonated with me. I wanted to portray her.

Margo’s relationship with Tallulah is complex; she is caring for this stranger one minute then ready to kick her out the next. Can you talk about how you balanced the chaos and control?

I love how people come into your life for a reason. This is the worst thing in Margo’s life, Tallulah. Margo tells her, “You’re ruining my life!” She doesn’t want this. But she comes to realize how incredible this meeting was. It opens her up. It makes her express and feel things and the advice she gives to Tallulah helps her realize what she needs in her life. Their relationship is a healing thing that changes them. All three women in the film [Margo, Tallulah, Carolyn] have fractured families. All the women characters are well fleshed-out, and the story was fascinating. Sian’s subject matter is about mothers, and that perhaps not everyone should be a mother. Sian approached this not from a place of judging. I thought the characters were beautiful. I knew I wanted in.

You’ve worked with Ellen Page before in “Juno.” You have a wonderful rapport in a park scene …

I greatly admire Ellen. It is very easy to work with her. We both are very open to being present in the scene, listening and answering in the simplest way. In that park scene, Tallulah is the only person Margo has spoken to like that, because Margo is so outside of her life. Tallulah is the person Margo feels safest talking to because it's the first time Margo is asked what she wants. She wanted to be married and have a family. She wanted to be a mother, and to love and be loved. “How’d that work out?” Tallulah asks. “Not very well,” Margo admits. She’d never said it to anyone before.

What I liked about the dynamic between Margo and Tallulah is that Margo is less interested in asking Tallulah about her son and more interested in getting to know and learn from this stranger. It is as if combating her loneliness is more restorative than reuniting with her family. Why do you think that is?

Yeah, that’s interesting. It’s true. Margo has lost her son and husband and there she is having to deal with her loneliness. And Tallulah makes Margo face that: her choices, and what she’s holding on to. The painting scene is a wonderful breakthrough. It’s the beginning of her letting go and being at peace and happy. Tallulah makes Margo face that, and she starts to see a life outside of who she is. She finds a new way to be. I know when she meets the baby she’s not sure it’s her grandchild, but that possibility — the chance it could be — makes her take this girl in.

There is a comic/dramatic scene in which Margo seduces her building’s doorman. You excel at making these awkward moments funny and sad. Can you describe your ability to find humor in pathos? And will you ever get a proper love scene?

Oh, you’re so funny! I prefer the love scenes that are funny and real. Most of the time things don’t work out the way they do in movies. That’s why I love this one: it’s not a typical love scene. I was happy that they kept it in. It propels my character’s story forward but it’s tangential. It’s great to see Margo taking these baby steps. I love playing things that go wrong, and having … sorry, I’m sort of speechless ... the way he kisses her and immediately her old self comes back. All she wants is to be loved by someone, and she fucked it up. This feeling that she might actually be someone who can be loved by someone else is so important to her. The seed that she’s desirable is planted.

Margo talks about not always being a goody two shoes, and doing crazy things, like smuggling heroin in her crotch. What’s something people would be surprised to learn about you?

Well, Gary, there are many things that are not fit to print. I would probably raise a few eyebrows about some of the choices I’ve made in my life to fit in. Everyone has those moments in life when they make a decision … I’ve never tried to smuggle heroin, but I’ve done questionable things to hold on to someone’s love. I’ve done things I’m not proud of, but I’m still trying to be my best self and I love to play characters who are trying to look at themselves and move forward.

It’s hard to accept change and let it in to our lives. I don’t know why. All life is is a series of changes but we are reluctant to change! People stay in relationships for [the wrong] reasons. Why do we stay in them? Because of what we want them to be and not because of what they are. In my own life, I’m trying to face what life is and how to be able to change and embrace it. Holding on to what I think I need. Margo spoke to me for that reason. She made me want to open myself up and to change and have hope. I think the characters in “Tallulah” are ones you have mercy for and compassion.

Margo appreciates Tallulah for “being who she really is,” though audiences know she’s not. What can you say about playing no-nonsense characters? That’s a quality many of the characters you play have.

I like the duality of the complexity of people. We are not just one thing. As an actress, the more difficult the character, the more my job is to find the humanity. What is their dirty little secret? What makes them human no matter how despicable they are? It usually comes from a wound. Some, like Betty in “The Way Way Back,” drink to anesthetize their problems. Margo drinks, but her problem is she hides in this apartment that she isn’t supposed to have. She’s desperately trying not to let anyone know her reality. She doesn’t know who she is anymore.

Being six feet tall and walking in a room, people think I’m tough and confident. I can make you think that, but underneath, I’m insecure. You want to show you’ve got it all together in public, then you go home and sob. But that’s what I love to play. I understand wanting to hide things from people and being fragile but tough on the outside. We all come from the same place and put it out there.