Mothering, long-distance: There are no models for women who parent from hundreds of miles away

My daughter and my dissertation came into this world at about the same time. Then, I got divorced 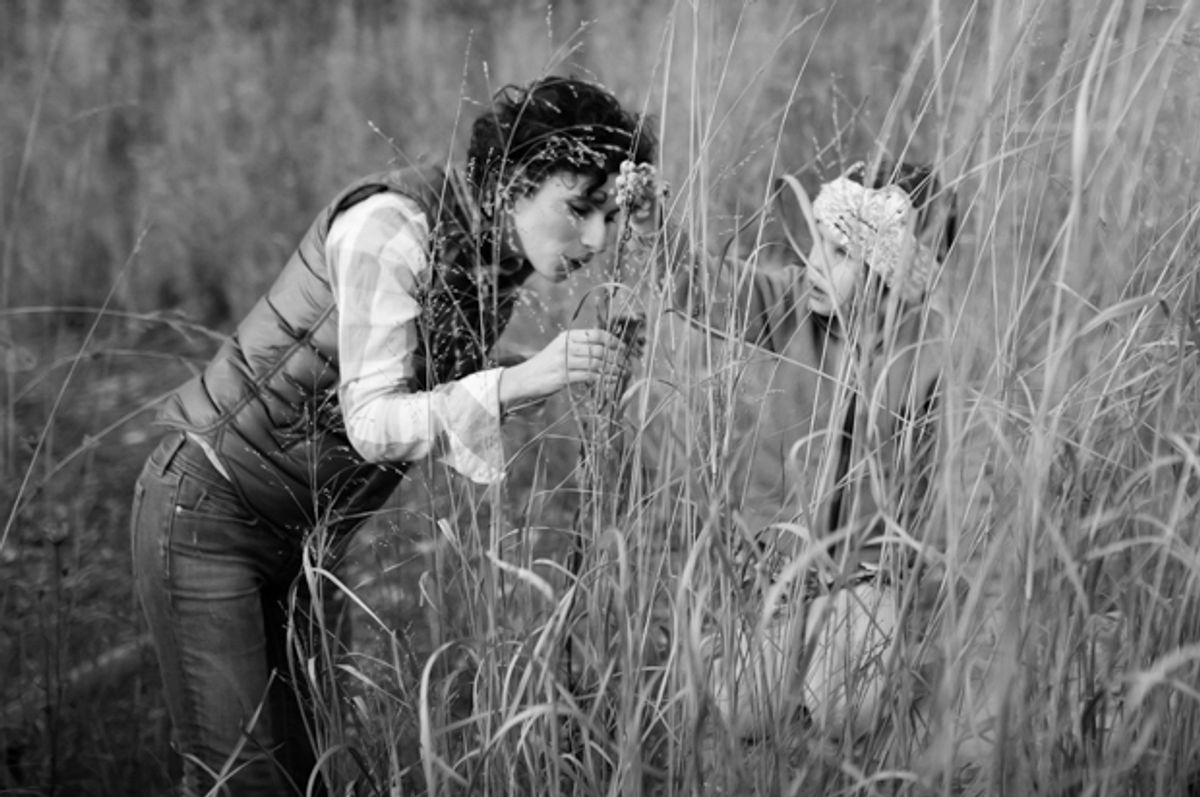 A photo of the author with her daughter. (Jenille Boston at Nell Boss Photography)
--

My daughter lost her first tooth late. By the time her first tooth came out, many of her classmates already smiled a handful of grownup teeth. She followed in her mother’s footsteps. My teeth were always slow. I still have all my wisdom teeth.

Her father texted me an un-captioned and unexpected snapshot of her tooth loss that evening. Her smile was lovely and proud and excited. She had been anticipating the loss of that first tooth for many weeks. She was eager to catch up with her classmates.

I wouldn’t see the actual space in her mouth for several days yet. Last summer, one month before she started in the first grade, I moved to a city three hours away from my daughter’s elementary school. I had a new job after finally completing my doctoral program. Since then, Nuala and I have been navigating what it means to love one another from a distance.

My daughter and my dissertation came into this world at about the same time. I began reading the scholarly literature for my prospectus the summer I was pregnant. I sat with my round and growing belly in the garage, with the sun streaming through the open door, reading about sexual violence, victimization and rape laws. It was a mishmash of the best and the worst of the world. Hope and trauma, all at once.

After my daughter was born on the last day of summer, I took some time off, and then resumed reading in the winter months. Now she nursed and napped on my lap while I read and formulated my prospectus. We couldn’t work in the mornings because that was time for play. I wrote in the evenings after she slept. Throughout her babyhood and toddlerhood, she often came with me to meetings, as she attended daycare only some of the time. It was all we could afford.

There was one conference in Chicago, at the beginning of her first summer, when I was scheduled to present first thing on a Sunday morning, and she cried all night long in the hotel room. But of course we survived and drove home to Michigan that afternoon with some new baby teeth.

Her father moved out shortly after her third birthday. He loved someone else. So we were already charting a non-traditional family formation when I moved south. Nuala was already used to shuttling between two homes. She was already accustomed to seeing a broad network of grownups as her people. Luckily, her teachers were great supporters and helped to frame her situation as ordinary, no better and no worse than her classmates’.

We continued on. I collected lots of data, and she grew into a kid. By the end, she was still snuggled next to me on the couch, watching cartoons and keeping me company, as I edited all the words I had written. One rainy afternoon last spring, she asked what I was doing. I told her I was writing a thing called a dissertation. Then she asked if I had written it that afternoon. When I told her, no, it took a long time to write, she nonchalantly turned back to the television.

As I neared the end of my dissertation, I was left with a choice: Which, if any, geographic restrictions should I place on my job search? My divorce had been long and hard, and I lost a lot. I had invested nearly a decade training to become a professor. I didn’t want to also lose the career toward which I had worked so many years. But the academic job market is brutal. Most graduate students go on a national search and count themselves lucky if they receive a single tenure track offer. It turns out that I was one of the lucky ones: I accepted a faculty position just 200 miles south of home.

After weighing all the ordinary concerns of a major life transition, I decided to pursue mothering and my career. Side by side, just like from the beginning. I was proud of what I had accomplished, and I wanted to model a strong professional identity for my daughter. Ultimately, I decided it would be better for Nuala to have a whole mother who she saw less frequently, rather than a broken and bitter mother who she saw exactly 50 percent of the week.

We imagine mothers as being in physical proximity to their children. We get so caught up in the mommy wars — cloth or plastic diapers, big career versus stay-at-home mom, free-range or helicopter parenting — that we lose sight of the more fundamental questions. What does it mean to mother a child? What are the specific actions that lead to a well-adjusted child and an emotionally-engaged relationship? How important is daily proximity?

When I tell people about the circumstances with my daughter, their reactions indicate subtly just how central physical proximity is to our understanding of what it means to be a mother. I have received surprised faces, murmurs of apology, and shaking of heads. One friend gave me an unsolicited hug, gripping me tight, and said she was so sorry for me. These reactions of sympathy and shock come from my supporters who only want the best for Nuala and me. I can only imagine the vitriol that the naysayers might spew. Certainly no one has commended me for modeling professional aspirations and independence and financial stability to my daughter.

There are seemingly no models for how to be an engaged mother from a distance. It is almost impossible to imagine an alternative to the idea that mothers should be always close to their children. This is odd because there are many circumstances in which mothers are away from their children for long stretches of time. I look to military mothers and Filipina migrants who provide caregiving and domestic work in the U.S., even as their own children are left without a physically-proximate mother at home. Somehow they make it work.

Nuala and I are charting new territory. We explore all the pizza and ice cream joints on our weekends together. We have weekly Skype story sessions. She always wants to pet the cat as he careens into view on my laptop’s camera. So we then talk about how fun it would be if we could jump through the computer and be in the same room together. Maybe some day in the future, I remind her. I drive up for as many of her school events as I can manage. And we’re planning some summer travel adventures.

I also try to remind myself that each child is a child for a finite amount of time. It is impossible to imagine that a mother would or could be with her child for every moment of her youth. Certainly, this would be a form of hovercraft parenting upon which the experts would frown. For that matter, American time-use surveys indicate that most parents, even those for whom caregiving is their primary responsibility, tend to spend very little focused and engaged time with their children in any given day. I circle back to the question of what exactly it means to be an engaged parent.

Recently, I chaperoned a two-night camping trip with her Girl Scouts troop. The weather was surprisingly warm for a late winter weekend in Michigan. It was wonderful to watch Nuala frolic with her friends and explore the deer skeleton we discovered while hiking and to calm the tears of the girls who were missing their mothers at lights out. Four girls even lost a tooth, which caused a commotion, because what are the odds that four out of thirteen six-year-olds would lose a tooth in one weekend? I felt like a regular mom out there in the woods.

Across the doubts, I try to hold onto moments like these. I try to tell myself new stories of what it means to be an engaged mother. Our time is fleeting, and our children grow up. The best we can do is to engage fully in the stretches of time that we do have, no matter how that time is organized. I may not eat breakfast with her every morning, and I may not unpack her school bag every afternoon. But I will foster her relationships with a rich community of supporters. I will take her on road trip this summer where we explore the backwoods of Kentucky and Tennessee and Georgia. I will encourage her to be brave and curious and adventuresome. Last summer, one lovely friend said that she could see Nuala and me going on grand adventures together. I like that vision of mothering.

Life didn’t turn out as I imagined it would. Maybe it’s naïve to think that it might have or could have gone according to script. On the good days, I remember that some of the sadness would be there no matter what our family formation. There is an intrinsic melancholy to watching your baby grow because each passing milestone is a day gone. Each lost tooth is a day behind us rather than one in front of us.

Several months into my new job and my new city, Nuala’s first grade teacher asked me, politely, if it was worth it. I wasn’t sure how to respond. I didn’t know. I don’t know. I want to model alternate possibilities for my daughter and her little friends. But I don’t yet know how many teeth I will miss. And I don’t yet know how Nuala will experience and look back upon her unconventional childhood. So I cannot yet say if it is worth it. As we chart our path, though, I know that we will have one another, as mother and daughter. Our story will become solid, even across the distance.

Jamie L. Small is an assistant professor of Sociology at the University of Dayton. Her research agenda focuses on law, masculinity, and sexual violence.