A challenge for Paul Ryan: Make the case for Donald Trump

Enough with the narrow denunciations: Paul Ryan should explain what powerful force keeps him bound to Donald Trump 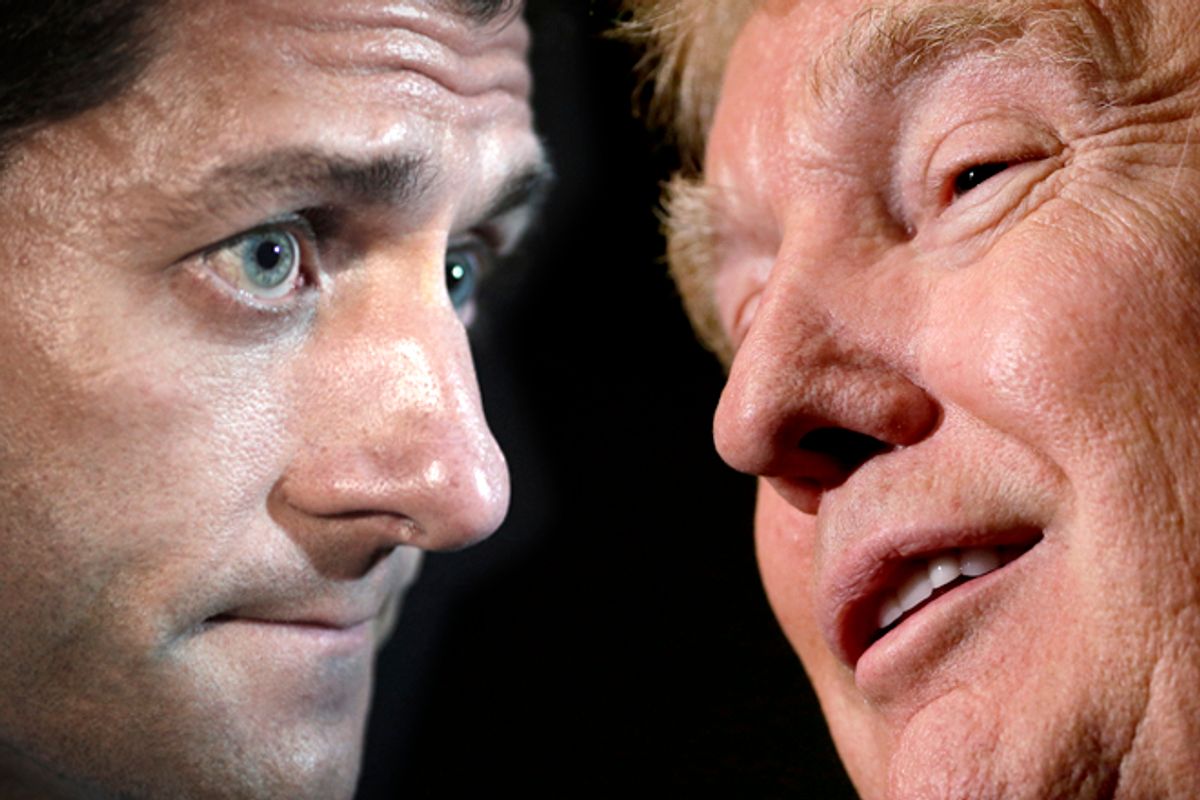 A couple of months ago, House Speaker Paul Ryan was put in the awkward position of denouncing the racist rhetoric coming from his own party’s presidential nominee. Donald Trump had been on the offensive against the judge handling the lawsuits against his defunct scam university, stating in plain terms that the judge couldn’t be trusted rule impartially because he was of Mexican descent. “Claiming that a person can’t do their job because of their race is sort of like the textbook definition of a racist comment,” Ryan said after disavowing Trump’s remarks and calling them unacceptable.

Let’s jump ahead to this past weekend and the statement Ryan’s office put out distancing the speaker from Trump’s ongoing attacks on Gold Star parents Khizr and Ghazala Khan following their emotional appearance at the Democratic National Convention. “America's greatness is built on the principles of liberty and preserved by the men and women who wear the uniform to defend it,” Ryan’s statement read. “As I have said on numerous occasions, a religious test for entering our country is not reflective of these fundamental values. I reject it.”

Paul Ryan is a Donald Trump supporter and endorser. As the nation’s highest-ranking Republican official, his continued support for the nominee sends a powerful signal to other Republicans that backing Trump is the right thing to do. And yet, on multiple occasions he’s had to make clear that he doesn’t just disagree with Trump’s rhetoric and policy positions, but that he actually considers them contrary to American values. There’s a good deal of tension there that demands resolution.

I’ve offered my own theories as to why Republican leaders in Congress like Ryan and Senate Majority Leader Mitch McConnell continue back Trump even as he descends into outright racist demagoguery, and this latest outburst from Trump has prompted other writers and journalists to offer explanations the bizarre political rationales at play. But nothing we sad, silly pundits can write will ever be as satisfying as an explanation directly from the man himself, which is why Paul Ryan should get out there and make the case for why he’s still a Trump supporter.

Call this trolling if you must, but at this point I think Ryan doesn’t have much of a choice, given how many very narrowly focused statements he has had to make denouncing Trump’s reprehensible behavior (but not the nominee himself). There are only so many times you can criticize someone for “textbook” racism and violations of “fundamental values” before people start wondering what benefits a potential Trump presidency would bring that could possibly outweigh these extraordinary negatives. There’s something that stands out in the mind of the Speaker of the House as being more consequential than a president who makes race-based attacks on federal judges and faith-based attacks on the families of dead soldiers, and I’m phenomenally curious to know what it is.

Is it tax cuts? Deregulation? Nominating a conservative Supreme Court justice to replace Antonin Scalia? Some combination of the three? Perhaps it’s just plain old partisanship and the unwillingness to be the Republican leader who breaks apart the party. Even if Ryan leans on the tired cop-out of “anyone is better than Hillary Clinton,” that would still provide clarity as to the current state of our politics and what we can expect from Republican leaders going forward if Trump loses. If Paul Ryan and Mitch McConnell actually believe that the election of a mainstream Democrat is a greater threat to the country than a candidate who espouses racism and religious bigotry as official policies, then it’s on them to explain why. Other Republicans have concluded the opposite and left the GOP in disgust – what do Ryan and McConnell see that these people don’t?

I don’t expect Paul Ryan or any Republican official to unendorse Trump – they’ve sent a clear signal that they’re sticking with the candidate on his enthusiastic hunt for rock-bottom. But if they’re going to continue supporting a presidential nominee who consistently forces them to denounce his policies and rhetoric as contrary to their values, then I think they should explain in plain terms what powerful force is keeping them bound to Donald Trump.