The U.S. can't let Trump win: His victory would embolden the most hateful Americans who fostered his rise

A victory for Trump would legitimize the dangerous, inchoate anger of unhinged Americans 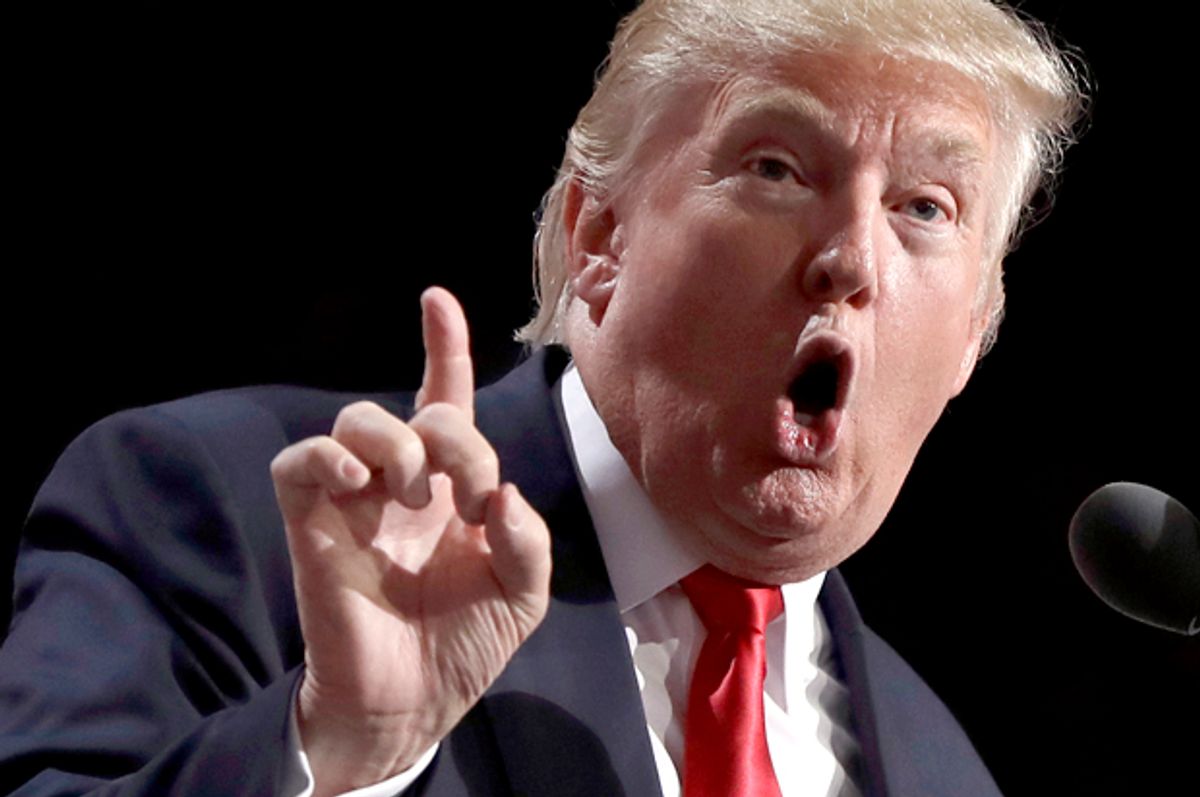 Donald Trump is an existential threat to American democracy, and therefore he can't simply lose the election. He has to be electorally humiliated. Crushed. Embarrassed. The candidate who pledged "so much winning" has to be personally mortified by an unequivocal loss — an electoral massacre so severe that it leaves little room for screeching about rigged elections, and, more importantly, the loss has to be so overwhelming that it discourages any similar would-be populist tyrants from emerging in the future. Trump and anyone similar needs to be politically put-down in a way that permanently ends whatever derangement led us to this point.

Sadly, however, the latest polls continue to indicate that the popular vote will come down to a five-point contest.

Monday's CBS News poll, taken following the conventions, puts the race at 47-41 (including leaners) in Hillary's favor. PPP's latest numbers also reflect a five-point race, even after all the hoopla surrounding the Democratic Convention; even after Hillary's historic nomination and President Obama's moving remarks; even after Michelle Obama's barnburner address and especially the salient remarks by Gold Star parents Khizr and Ghazala Khan. It's still just a five or six point race, even after the deeply contrasting conventions, and even after news about Trump's nefarious connections to Putin; even after Trump trolled the Khans on Twitter (as predicted by Hillary in her acceptance speech), and even after his utterly disastrous Palin-style interview with ABC News' George Stephanopoulos on Sunday.

Five points separate Hillary and national oblivion. As Bernie Sanders said on "Real Time with Bill Maher" on Friday, Trump is easily the most treacherous presidential nominee in modern history, and yet there's really not much of a difference in the polls between his numbers and the numbers of previous GOP nominees, McCain and Romney.

It seems as though nothing will change the hearts and minds of Trump's rage-filled minion. And I suppose that's acceptable as long as enough sensible, rational Republicans choose to forego this election, either voting for Gary Johnson or Hillary Clinton, or by simply sitting it out. It can't be underscored enough how this election has to result in a party realignment, with moderate, reasonable Republicans voting with center-left and, yes, progressive Democrats to defeat this cancerous GOP nominee.

Consequently, the results of the election have to send a clear and incontrovertible statement to everyone paying attention: there is no room in American politics for "homegrown demagogues," as President Obama put it, and, equally as importantly, the mindless automatons who support them. Imagine for a moment the George W. Bush presidency, with all of its hyper-jingoistic supporters, but with less discipline, less decorum and far less deference to democratic and constitutional boundaries. Add the real possibility of a nuclear exchange. That's the Trump presidency.

In the days following Hillary Clinton's most memorable acceptance speech line, "A man you can bait with a tweet is not a man we can trust with nuclear weapons," Trump nevertheless spent much of his weekend eviscerating Khizr Khan, and his wife, via Twitter. And his people dutifully joined the pile-on. Trump's media flacks at Breitbart ran the following headline Monday morning: "Clinton Cash: Khizr Khan’s Deep Legal, Financial Connections to Saudi Arabia, Hillary’s Clinton Foundation Tie Terror, Immigration, Email Scandals Together." In other words, the pro-Trump cult is busily Swift-Boating the parents of an American hero who gave his life in Iraq to protect his fellow soldiers.

The fact that Trump and his flying monkeys have staked out a position in which Gold Star parents are unflinchingly demonized is enough evidence to illustrate how far the Republicans have descended since the disastrous Bush years. Indeed, Trump's GOP is liquidating its pro-troops brand in order to prop up their Clown Dictator nominee. They're selling out their brand in support of a candidate who's a foreign policy dilettante -- a man who, most recently, defiantly botched responses to questions about the annexation of Crimea and Putin's excursion into Ukraine (Trump also called it "The" Ukraine). And then he spent the next day, not brushing up on his foreign policy briefing manuals, but by trolling the Khans and CNN on Twitter. Borrowing one of Trump's Twitter words: Weak!

Regardless, the Trump loyalists will continue to deflect to Hillary's mistakes, as if there's any equivalence between her trespasses and his, and even though many of them simply aren't buying Trump's ludicrous promises about making America great in the first place. Indeed, only 66 percent of Trump supporters told Fox News pollsters that they believe Trump will do what he's promised, leaving upwards of 34 percent, give or take, who are enthusiastically voting for him and yet don't believe a word he blurts from his gaping orange maw. And the ones who believe his lies are so completely poisoned with Obama and Clinton derangement, devolving to behavior indicative of end-stage Syphilis, there's simply no reasoning with them. They're convinced that this would-be tyrant -- this mentally unstable, white supremacist man-child who claims to have "the best words" is utterly infallible. And so they are, too.

At the end of the day, it won't just be Trump who wins the election. It'll also be this bro and millions of other similarly horrendous Americans who are so completely ignorant and out-of-their-minds with inchoate anger and misplaced nationalism, they can't see how destructive a Trump presidency would be. They don't understand that they've been suckered by a professional matchstick man; a world-class con artist seated upon a golden throne of his own design. If these people are championed and legitimized with a voice inside the Oval Office, the nightmare will only have begun. From there, Trump copycats in the GOP will multiply like wet Mogwai, polluting elections up and down the ballot. The stakes of this contest have much to do with how badly the nation will be governed by an entitled, sociopathic Twitter troll, but mainly the stakes are about refusing to reward by consecration know-nothing demagogues and self-made dictators, along with the screaming hordes who mindlessly worship him.