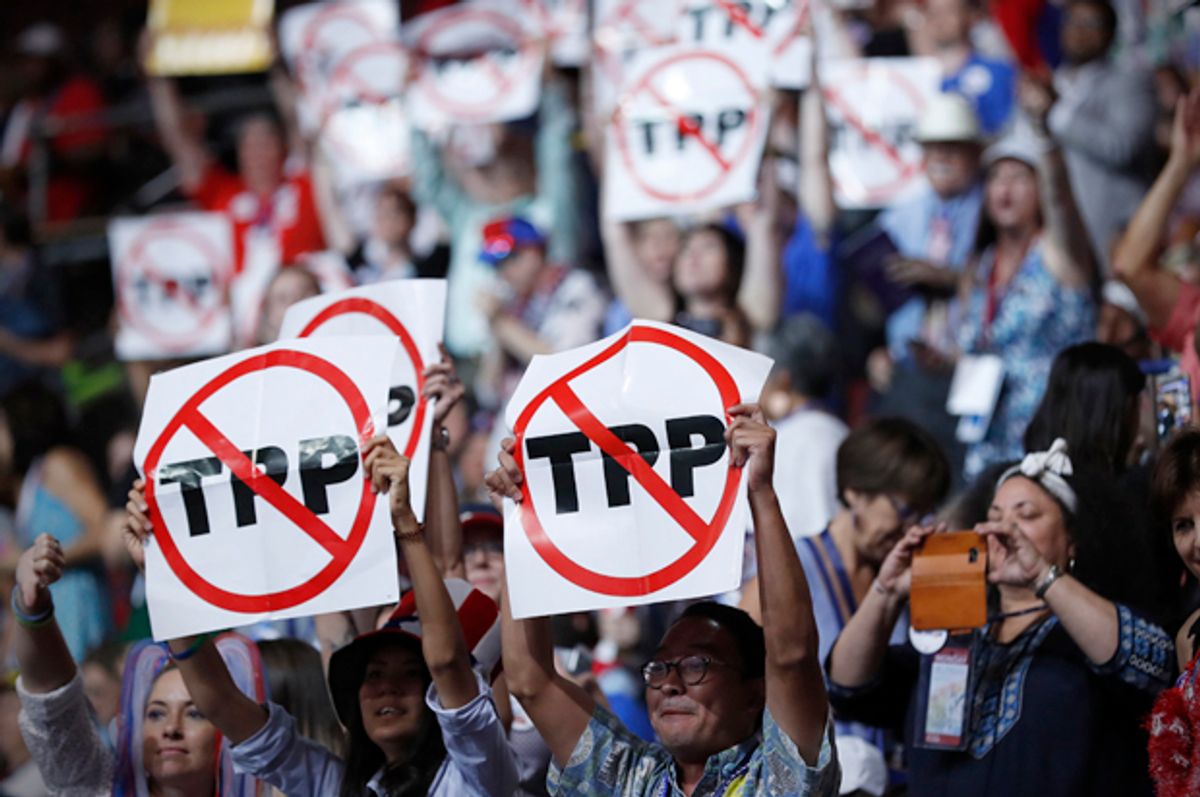 Here’s one of the best indicators that Congress won’t approve the Trans-Pacific Partnership: business groups are running a public campaign in support of it. I know that sounds like a paradox, but if the image of the TPP weren’t so tattered, there would be no need for such an overt PR campaign.

And yet, Trade Benefits America, a coalition of business groups, has put millions of dollars into influencing lawmakers of both parties to support the 12-nation agreement, specifically in the lame duck session of Congress after the elections. They’re ginning up support by having constituents write letters, by flooding town halls and political events, and even running ads in key House and Senate races, making trade an issue in the elections.

This shouldn’t be such a hard sell. The groups represent the leading fundraisers for many members of Congress. The strategy to pass the TPP in the lame duck, at the furthest possible point from any local accountability for the vote, should appeal to politicians. So why would you need a public advocacy campaign?

The answer is that the trade consensus is deader than it has been in the past twenty years. All the energy on this issue is with those who blame bad trade deals for the demise of U.S. manufacturing, the rise of multinational corporate influence, and the loss of good-paying American jobs. That’s from the right, where Donald Trump has made trade a cornerstone of his campaign, and from the left, where Bernie Sanders and his supporters forced trade to the top of the issue agenda.

No issue galvanized dissent at the Democratic National Convention like TPP. And supporters of the trade deal had to watch in vain as it racked up loss after loss throughout the week.

Tim Kaine, who supported the “fast track” bill that set the stage for TPP approval, had to disavow the agreement as a condition for getting onto the Clinton ticket. Bernie Sanders threw in an ad-libbed line in his convention speech about the TPP not getting a vote in the lame duck, and it garnered more applause than practically anything else in the four days in Philadelphia. Anti-TPP signs and chants were ubiquitous throughout the DNC; when asked about their persistence, Sanders campaign manager Jeff Weaver quipped on the convention floor, “This is an anti-TPP party. The Secretary (Clinton) is against TPP. What’s the problem?” Virginia Governor and longtime Clinton friend Terry McAuliffe was pummeled by his own allies after telling reporters that Hillary would eventually support TPP with tweaks.

Even President Obama, whose administration negotiated the deal with 12 Pacific Rim countries, didn’t even bother to mention trade in his convention speech.

The Republican convention, where you would typically hear defenses of free trade, was similarly pitched entirely in the opposite direction. Paul Ryan, a known TPP supporter, never mentioned it. Meanwhile, Trump spent large sections of his speech decrying “horrible and unfair trade deals.” In an address mostly devoid of policy prescriptions, on trade Trump detailed exactly what he would do. He would no longer negotiate multilateral agreements, enforce all trade violations, re-negotiate NAFTA and bilateral deals with China, and use tariffs to get cheaters in line. It was the only set of red lines in the speech, and it put the party on record in ways that make it very difficult for its members to carry the majority of votes on a major multilateral trade deal days after the election.

So business groups can send delegations to Congressional offices to tell the good-news story on trade. They can conduct “grassroots advertising” (which sounds more like astroturf, or fake grassroots) to overrun offices with pro-TPP letters. They can even post digital ads about candidates’ pro-trade positions in Senate races, though those Senators would probably rather they didn’t.

Trade Benefits America may comfort themselves with polling showing majority support for “free trade.” But breadth of support never matters as much in Washington as intensity. And the anger against trade deals from those who have bothered to educate themselves on the facts is clear and palpable. That intensity creates a wall of opposition that members of Congress simply don’t have any inclination to run into.

If TPP were on track for passage, you would never hear about this kind of lobbying effort. Business groups would contact the lawmakers needed for majority support privately, and set up the mechanics for lame duck passage. The public display is being done not to rescue TPP, but to rescue trade, the entire idea of it.

Contrary to popular belief, trade agreements have not been at the center of politics the way they are in 2016. NAFTA was an important political issue, but Democrats who voted for it did not lose their seats in 1994 disproportionately, relative to those who voted against it. And no member of Congress lost a primary because of their NAFTA vote.

This is a different situation. Trade has become a stand-in for the fight for the ideological soul of the Democratic Party, and among Republicans Donald Trump won the nomination based on defying his party’s position on trade. Passing TPP in this environment, even under cover of the lame duck session, would produce an unparalleled backlash, and these business groups know it. That’s why they’re trying to reverse the shattered image of trade, to make it safe to vote for something this toxic in the future.

That’s not a short-term fight, certainly not one that will be completed by November. The Trade Benefits America campaign serves almost as a signal of defeat on TPP today, in favor of trying again in the next presidency or beyond. Given the effortless way in which labor and other neoliberal trade opponents were dismissed in 2008, when Obama officials openly lied to them about their support for re-opening NAFTA, the change in the trade consensus is striking. And business groups aren’t likely to overturn it with a couple of Web ads.