Why were Hillary Clinton's comments at the Democratic National Convention about "systemic racism" met with silence?

Despite extensive talk about "race relations," many Americans still refuse to look the problem in the face 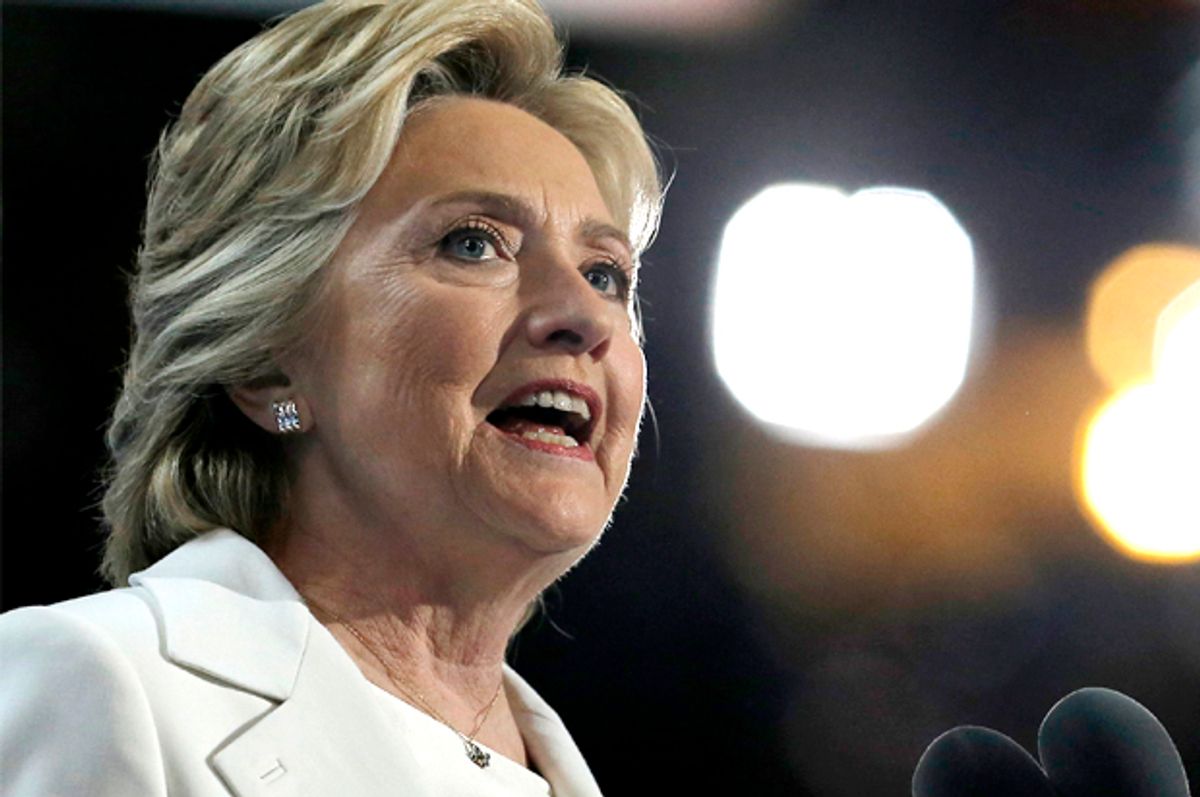 At about the 52 minute mark during her acceptance speech at the Democratic National Convention in Philadelphia, Hillary Clinton told the audience the following:

We have to heal the divides in our country. Not just on guns. But on race. Immigration. And more. And that starts with listening, listening to each other. Trying, as best we can, to walk in each other's shoes.

So let's put ourselves in the shoes of young black and Latino men and women who face the effects of systemic racism, and are made to feel like their lives are disposable (my emphasis added).

There were few if any extensive “think pieces” written about the above passage. The moribund and oft-discussed “national conversation” on race has not turned its attention to Hillary Clinton’s plea and implied promise. Words that should have resonated were instead met with relative silence.

Perhaps Hillary Clinton’s comments on the color line, justice, and empathy were lost during a week when the Democratic Party was celebrating America’s diversity. As such, the Democrats’ (re)capturing the language and symbolism of America as a “shining city on the hill,” and her people as blessed by destiny and God for greatness, overshadowed any discussion of the country’s many shortcomings.

Politicians make many promises in order to get elected. Cynicism has trained the American people to treat their words with more than a full measure of suspicion.

Despite the progressive and inclusive racial optics and tone of the Democratic National Convention, Hillary Clinton might not be the perfect communicator for a perspective that is critical of systemic and institutional racism. She will likely never live down her comments about black “super predators” who needed to be brought to “heel” by the country’s law enforcement system — despite how complicated the social and political context may have actually been at the time.

I was pleased by the images from the Democratic National Convention in Philadelphia and happy to see black and brown folks that included a great American president, a model First Lady, and an up and coming star in the United States Senate with aspirations for even higher office, rain down effortless intelligence, wit, and grace from the stage out on to the crowd and across the airwaves and Internet.

But like most students of the color line and American politics, I am not so gullible as to believe that such powerful symbolism will at all translate into changes in the quotidian lives of the vast majority of black and brown folks in the United States. People of color who happen to be elites can mine such symbolism for personal gain. Neoliberal multiculturalism is a narrow game from which few people of color will ever substantively (materially and economically) benefit in the long term.

And I must confess that as I heard Hillary Clinton implore white Americans to “put ourselves in the shoes of young black and Latino men and women who face the effects of systemic racism, and are made to feel like their lives are disposable” I experienced, as I had during the previous three days of the Democratic National Convention, a feeling of cognitive dissonance.

I heard her hopeful words and those of the other featured speakers, yet I could not stop thinking about the recent video recording of a black man named Charles Kinsey, with his hands up in the air, as he lay flat on the ground, a guardian and caregiver for a severely autistic person, him pleading with police to not shoot as he is unarmed. The police in North Miami shot him anyway. Their morally perverse and ethically deranged excuse was that they were trying to “protect” Kinsey from his client who was “armed” with a toy truck. And when Kinsey asked the police thug who shot him why, the answer was “I don’t know.”

I also thought of Philando Castile, Alton Sterling, Eric Garner, Tamir Rice, Rekia Boyd, and so many other black Americans who have been unjustly shot dead, beaten, sexually assaulted, maimed, or humiliated by America’s police. Soaring and racially inclusive rhetoric will not bring them back to life; soaring and racially inclusive rhetoric did not stop them from being killed by America’s out of control police. Historically, the White Gaze and White America have little empathy for black people, generally, and black men, in particular. The silence could just be an acknowledgement of the near absurdity of Hillary Clinton’s request that white folks “put ourselves in the shoes of young black and Latino men and women.”

Ultimately, the non-response to Hillary Clinton’s comments on race and the color line are a function of a broader exhaustion and confusion in response to the vague and ill-defined notion of “race relations” in America. These divergent perspectives on racial relations and racial progress in the United States are signaled to in public opinion polls and other research. For example, a recent June 2016 poll by Pew revealed the following:

A much lower share of whites (53%) say the country still has work to do for blacks to achieve equal rights with whites, and only 11% express doubt that these changes will come. Four-in-ten whites believe the country will eventually make the changes needed for blacks to have equal rights, and about the same share (38%) say enough changes have already been made.

More broadly, blacks and whites offer different perspectives of the current state of race relations in the U.S. White Americans are evenly divided, with 46% saying race relations are generally good and 45% saying they are generally bad. In contrast, by a nearly two-to-one margin, blacks are more likely to say race relations are bad (61%) rather than good (34%). Blacks are also about twice as likely as whites to say too little attention is paid to race and racial issues in the U.S. these days (58% vs. 27%). About four-in-ten whites (41%) – compared with 22% of blacks – say there is too much focus on race and racial issues.

What would it take to make Hillary Clinton’s comments about challenging structural and institutional racism, and by implication working to eliminate its power, come true?

Several years ago, I had the opportunity to hear a lecture by sociologist Joe Feagin. He is one of the world’s foremost experts on race, gender, and social inequality. Feagin is also the author of more than 20 books on the subject. For approximately an hour, Professor Feagin and I spoke with one another after his lecture. During that time, he explained a very basic, but nonetheless, revolutionary idea. If the Equal Protection Clause of the Constitution; the Voting and Civil Rights Acts; and anti-discrimination laws that govern banking, employment, lending, school desegregation, and housing were fully and properly enforced, the United States would be much farther along the road to being an equal society on both sides of the color line than it is at present.

[To Dr. Feagin’s suggestions I would add compensating the living victims, immediate family members, and descendants of those who were victimized by racially discriminatory housing and lending practices by the United States government through the VA and FHA programs; continued research about and pressure on insurance companies and other entities that directly profited from chattel slavery in the United States to create a compensation fund that should be used for targeted grants and development programs for the African-American community; criminal justice reform; and establishing a truth and reconciliation committee in the United States to deal with the country’s living legacy of slavery, Jim and Jane Crow, as well as white racism in the present.]

The problem is that readily available and present solutions to “the race problem” in the United States are treated as some type of great discovery, an unachievable goal. Inertia — and in many cases falling behind and regressing on matters of “racial justice” and “race relations” — exists because too many Americans choose to look away from the solutions that are right in front of them and instead treat them as a type of impractical dreaming and goal. This is a type of willful paralysis and a political treadmill…and what is in many ways all so much wasted energy.